Cooperation in the virtual space is learnable

The Faculty of Economic and Social Sciences of BME is participating in a two-year research programme on interactions and collaboration among people.

NeuroCog Space is the joint research programme of the Faculty of Economic and Social Sciences of BME, the Institute for Computer Science and Control (SZTAKI) and the Institute of Cognitive Neuroscience and Psychology of the Hungarian Academy of Sciences. „In the first two series of experiments of the research programme we examine how two persons working in two distant locations can cooperate on a given task,” as Károly Hercegfi Faculty Coordinator of the project summarized the aim of the research. 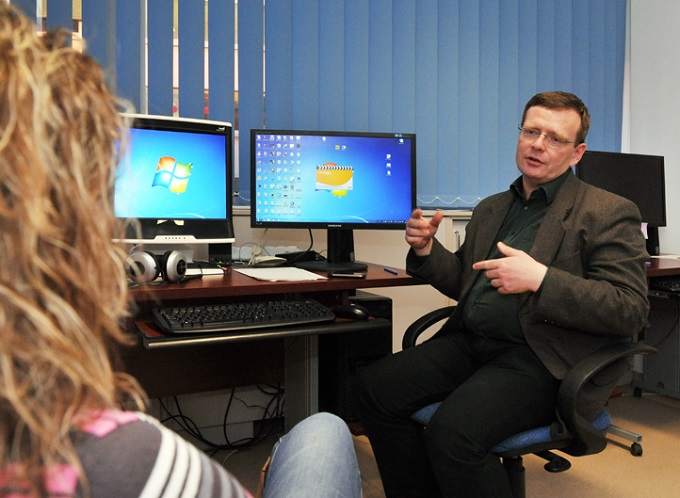 „According to the project plan the two persons involved are asked to organize a two-day Budapest sightseeing programme for a student group from the USA. One participant works in the building of the Hungarian Academy of Sciences in a 3-dimensional virtual travel agent’s office, while their partner, who is in the building of the University of Technology can see the same environment in 2-dimensions on a screen. The virtual office is created using the VirCa platform, which was developed by the Academy earlier.”

„The 3D immersive Virtual Office has three special walls that allow images to be projected on them creating the illusion of being inside the virtual environment. The user inside the room wears special glasses that follow their eye movements and can see 3D images of objects in the virtual scene projected on the walls. They also have ECG electrodes, which measure their mental activities. „During the cooperation activities we examine psychological factors: who does what, who takes the dominant role, how persons behave in the course of the project, how they share tasks and what are the factors that influence their cooperation,” as the details of the research the Faculty Coordinator explained.

„With the ECG electrodes we measure the changes in the heart rhythm, which are caused by mental activities. For example when a software is evaluated how user-friendly it is, the testers’ opinions are formed by their subjective impressions and views. They may highlight only 5-6 problem areas in the evaluation interview. On the other hand by checking and analyzing the variability or changes in the heart rhythm in 5-second cycles we can assess what effect the activity made on the users and therefore make a more exact assessment of their actual experiences,” emphasized Károly Hercegfi.

The faculty started observing human behaviour in a virtual environment in a Marie Curie project programme financed by the European Union and it is followed in the present 4-year research programme. In each term 20 participants – mostly students – are involved, who all have different personalities, attitudes and characters. Graphical solutions of the virtual space are slightly changed in each experiment cycle. In this year’s new phase the Institute of Cognitive Neuroscience and Psychology of the Hungarian Academy of Sciences will apply EEG as a new measurement tool, which will show the actual states of mind of the users; if they feel interested, excited, tired or maybe bored. “EEG was mostly used to examine basic characteristics; the present complex usage may be a revolutionary methodological solution,” added Károly Hercegfi. 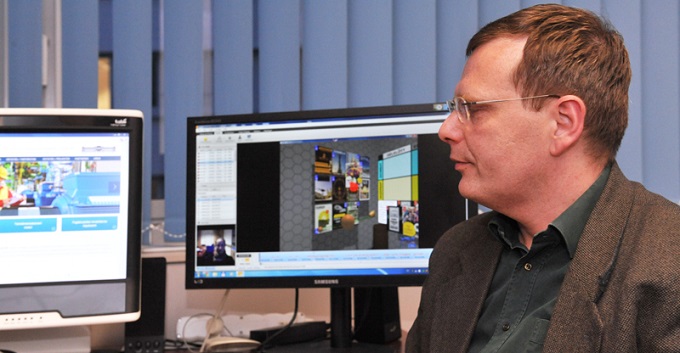 „Using the virtual space is a learnable skill but as we experienced users who have more developed technical skills or had already played computer games do find it easier. Some of the partners in the experiment had known each other before but the majority of them met first during the programme. According to our experiences it was not the existing or previous personal contact but rather the social and interpersonal skills of the persons that influenced the success of the cooperation,” concluded the Faculty Coordinator of the research.

“We are now in the phase of data processing and we can only guess what the final results of the research will be. We mostly regard the project a methodological experiment, which will bring valuable conclusions in the future. In the project we have the opportunity to observe the cooperation of two people in the virtual space, in other words we can see how two colleagues work together from different locations using modern infocommunication devices. Such forms of communication are more and more widespread mainly in large multinational companies that have offices in several different countries. According to the experiments the factors that make cooperation through virtual channels more efficient can be identified, which can bring financial benefits in business life. Also the research programme is a team-psychological experiment and the observations in the virtual space can be used indirectly for search optimization,” summarized the possible future applications of the project Károly Hercegfi.

“Our faculty receives enquiries from various companies to test softwares and client service systems from the usability aspect in a similar way,” added the Faculty Coordinator. “We have already tested design programmes, client service systems, and also the air control software. Our activities contribute to the growing efficiency and speed of the given programmes that is financially beneficial for the companies.”