Following its resounding success at CES, the game, jointly developed by BME and the Nokia Bell Labs in Budapest, is about to be showcased in several international conferences.

“By showing the real and the virtual world together our aim was to illustrate the communications potential of 5G networks and the related engineering challenges. For this we chose the famous Hungarikum, the Rubik’s cube, an excellent device for demonstration, which people can hold in their hands and which is close to our hearts. The digital version of the Rubik’s cube enabled us to connect tactile and visual experiences: users rotate and twist the single-coloured black or white cube made with 3D printing and fitted with several sensors while wearing virtual glasses, which project another visual image: the virtual colour copy of the object they are holding. This image copies the physical movements in real time”, explained Domokos Kiss and Attila Hideg, assistant lecturers of the Department of Automation and Applied Informatics at BME’s Faculty of Electrical Engineering and Informatics. They are the hardware and software coordinators of the project, which was showcased in this year’s CES (Consumer Electronics Show) in Las Vegas, drumming up huge interest. It was developed within the subproject of BME’s Centre for University-Industry Cooperation (information and communications technologies), with the help of experts from the Nokia Bell Labs research and development centre in Budapest, a key industry partner of Budapest University of Technology and Economics. 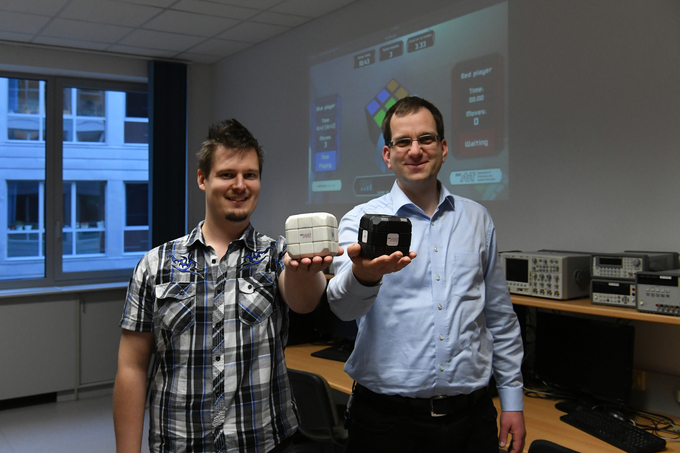 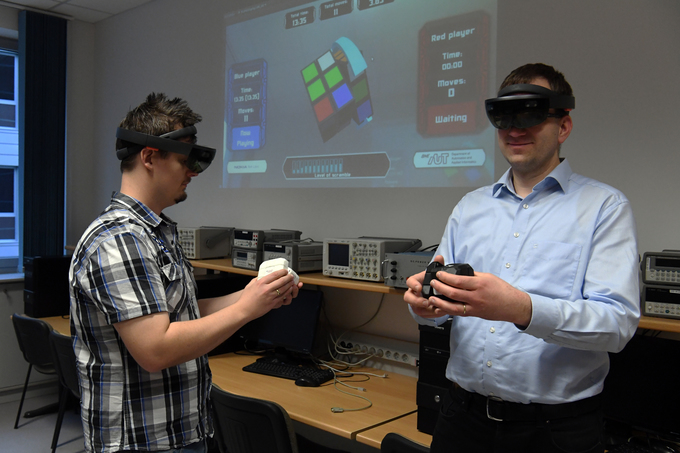 Due to large visitor numbers at CES, the virtual image of the Rubik’s cube was displayed this time on a giant screen, so that engineers could share the user experience with many people simultaneously. For an even more successful experience, a solution guide was also incorporated into the programme: the computer provided detailed instructions to players on how to solve the puzzle and what their next move should be. 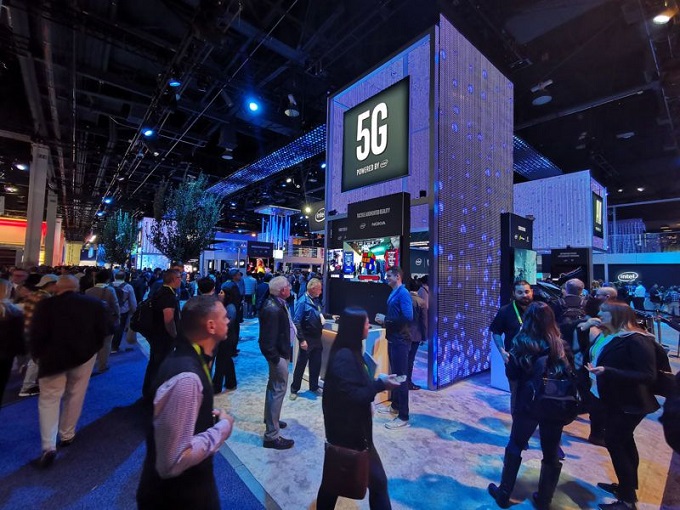 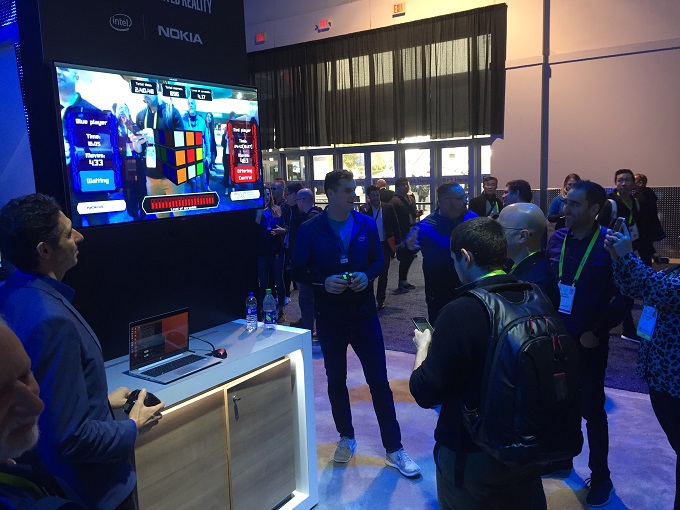 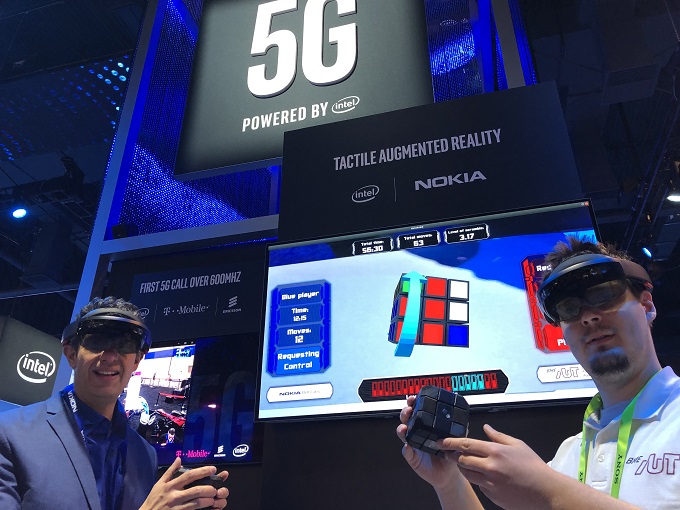 “The demonstration shows the multiple capabilities and possibilities for using 5G technology. The first accomplishment is the digitalisation of objects which provides a gateway between the physical and the virtual world. We decided to use a classic and deservedly world-famous Hungarian innovation, the Rubik’s cube, as an example to show how the IoT-based (Internet of Things) sensor communication and digitalisation can be extended to almost any device. Apart from the IoT, mixed reality through network-connected devices is also used here as a display technology, requiring a different communication channel for the display of high-definition image content, compared with the IoT. One of the key innovations of 5G networks is that they are able to serve data links with different demands within one physical network and are thus able to adapt to demands flexibly. The programmability and the flexible allocation of computing resources of 5G networks is able to meet the strict latency (delay) requirement of tactile applications. All this is coupled with the ability to provide full user mobility, mapping the changes of communication requirements in space and time, along self-organising principles. The current technologies are only capable of producing interactive mixed reality without any mobility. Compared to these, the demo shows a solution without any restrictions (in space, resources and time), where multiple users in different locations are able to work together in real time to solve various tasks (in this case the puzzle). 5G networks applying software and visualisation technologies are independently capable of moving certain functions between the data centres in real time, without the users even noticing this, thus ensuring that the users and their applications are served from the most optimal location. Alongside the new radio access technology, the extremely short response time of 5G networks is ensured by these dynamic self-organising capabilities, controlled by artificial intelligence,” said Csaba Vulkán, head of Nokia Bell Labs Budapest. 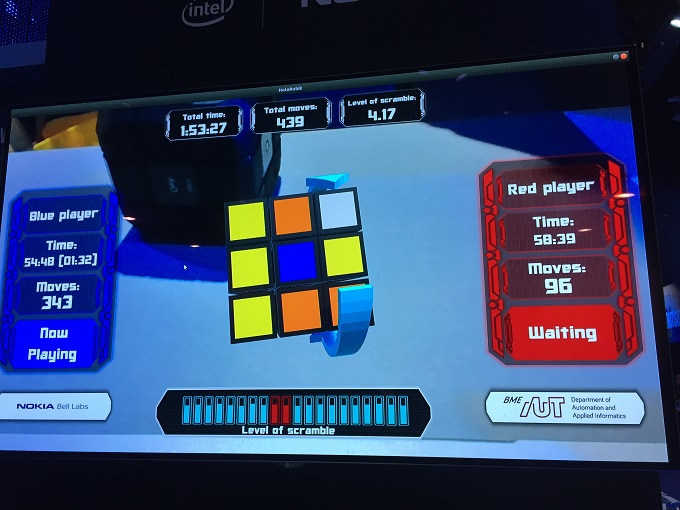 The hardware and the software for the digital Rubik’s cube was developed at the Department of Automation and Applied Informatics of BME’s Faculty of Electrical Engineering and Informatics under the professional leadership of Nokia Bell Labs, the originator of the idea. Last year the 8-10-strong group of developers at BME came up with a unique, hybrid mechanical-electronic system, based on the well-known mechanism of the Rubik’s cube. The mechanics were created locally, using 3D printing. The hardware system of the cube was also designed by experts from the department: the six rotatable sides of the cube were fitted with sensors and Bluetooth, through which the object is able to communicate with any type of computer (notebook, Raspberry Pi or even smartphone). Side rotations are detected by so-called incremental encoder sensors. The cube also has an inertial sensor, which helps to identify the object’s exact orientation in three-dimensional space.

“The project posed multiple engineering challenges. We had to come up with intelligent solutions, which enable the actual physical movements of the single-coloured cube, fitted with sensors, to be displayed in the virtual space of augmented reality (AR) with a minimal delay of less than 20 milliseconds in order to synchronise the movements of the human hand and eye smoothly”, said the lecturers of the Department of Automation and Applied Informatics. They added that designing and making a complex electronics system which fits inside the cube had been quite a difficult task. For this they had to synchronise the mechanics and the electronics down to the smallest detail, while during the design of the cube they had to ensure easy manipulations and guarantee a very realistic experience. 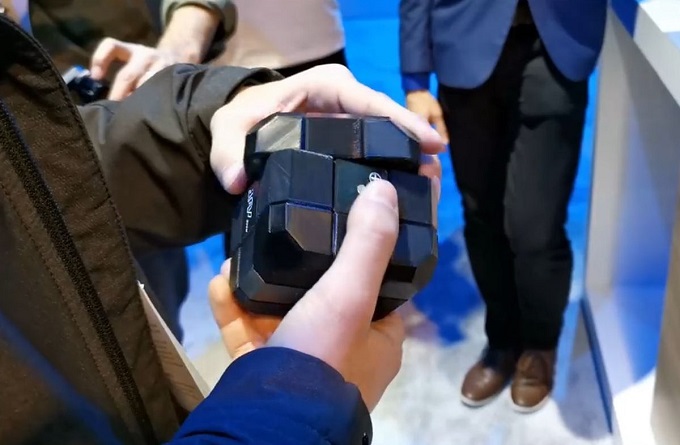 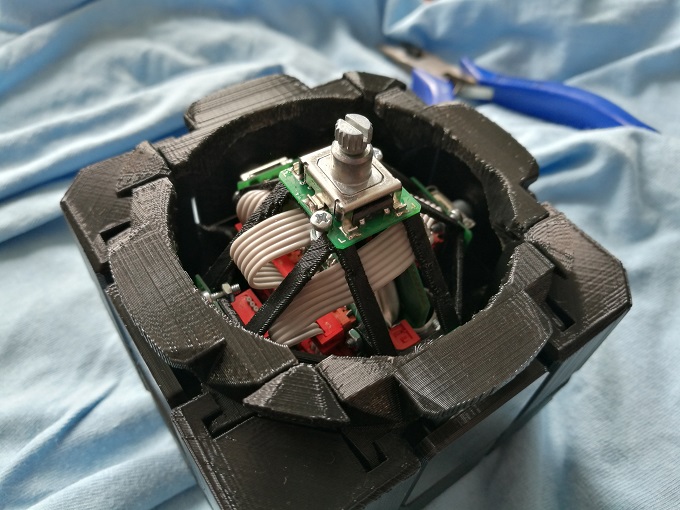 Visitors to the stand at CES 2019 in Las Vegas could test their skills and try the digital Rubik’s cube. A multi-player option was also available, when all players – irrespective of the geographical distance between them – saw the same virtual coloured cube while holding their own cube in their hands. Since it is a multi-player game, the users take turns in being the active leading player, so only one person at a time can change the cube, while their move can be seen immediately by all players. What’s more, the virtual Rubik’s cube orientation in space is identical to the way each player holds their own real cube, so everyone can follow how the game unfolds from their own perspective. The parameters are saved on a virtual server. 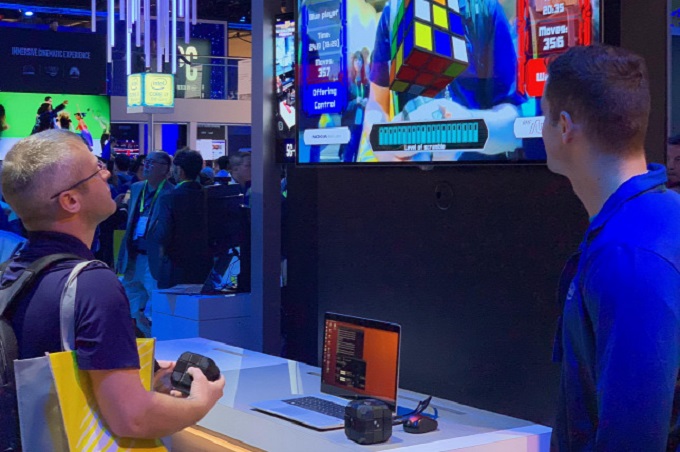 “The soon to be introduced 5G network provides a solution for the challenges of communication and the smooth, fast connection between devices: its aim is to remove geographical distances as barriers in communication or the execution of remote-controlled physical operations, where data and information pass from the sender to the addressee in real time, with only a minimum acceptable delay. 5G promises higher download and upload speeds and, according to expectations, much more devices will be capable of simultaneous communication”, the BME researchers described the potential of the 5G network, which is to be introduced in the near future. (The current prognosis is that the 5G network will be available for users in 2020 at the earliest. The goal of Hungary’s 5G Coalition (5GC), set up in 2017, is to make Hungary one of the first countries in the world where 5G technology is introduced and used in practice. A further aim of the coalition is to help Hungary to become a major European centre of 5G development and play a leading role in the region in designing and testing 5G applications. László Jakab, Dean of BME’s Faculty of Electrical Engineering and Informatics is a member of the coalition’s 7-strong board , while experts from the university are involved in several 5GC work teams – Editor’s note).

“It is a great honour and professional acknowledgement to be able to exhibit our newly developed cube at the world’s leading technology trade show”, said the researchers of BME’s Faculty of Electrical Engineering and Informatics on returning from Las Vegas. Sprouting from the innovative idea and created under the professional guidance of Nokia Bell Labs, the digital Rubik’s cube has become one of the key objects within the topic of 5G network capabilities. It provides a compact, interactive experience of all the elements (digitalisation, touch-based control, augmented reality), with which the audience of the demo is able to have first-hand experience of the capabilities of 5G. The demo cube made its debut at the 2018 Researchers' Night event. It was presented to an international audience of professionals at Nokia Innovation Days organised in Budapest, Stuttgart and Munich. This was followed by the most important venue so far, CES in Las Vegas, thanks to the cooperation with Nokia and Intel. It will be featured in several countries in the near future either in a road-show or as a permanent exhibit in Nokia’s offices in the US, Europe and Asia. One such event will be the prestigious Brooklyn 5G Summit, of which Nokia is a co-organiser. 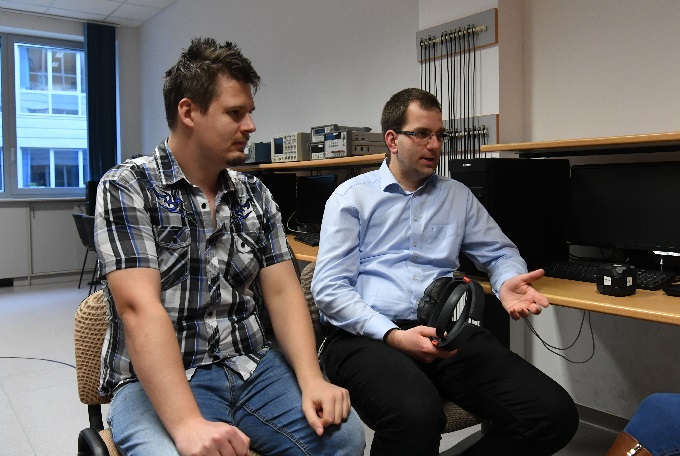 “In our view, it is important that besides our industry partners, our developments are also introduced to young people who attend the faculty’s career orientation events”, emphasised the lecturers of the Faculty of Electrical Engineering and Informatics. Apart from the Researchers’ Night, the digital Rubik’s cube also featured at BME’s Open Day and the so-called open-lab afternoon event of the Faculty of Electrical Engineering and Informatics. “We would like to seize every opportunity to show to the young generation the potential of technical and engineering careers, Budapest University of Technology and Economics and our faculty, where students can learn about new technologies that can shape the future, thus helping them to make their choices for their higher education studies.