“BME to remember the victims of the tragic Havlov attack”

A joint memorial service was held in the Czech Republic on the 74th anniversary of the WW2 bombing, in which BME students and their professors were killed or injured.

Budapest University of Technology and Economics is committed to honouring the memory of its former professors and students and looking after the Hazlov graves, which is a BME memorial “, emphasised László Dunai, Dean of BME’s Faculty of Civil Engineering in his speech, held on 11 April 2019 in Hazlov, a town in the western part of the Czech Republic. The professor attended the event as the head of the faculty, where most of the professors and students, buried in the town’s cemetery, had been teaching or studying. The dean described the memorial service, during which wreaths were laid on the graves, as deeply human and uplifting. He felt that all those who attended the event and had not met previously were brought very close to each other by the all-pervading memory of this tragic event. He also thought it remarkable for such a memorial place to have been preserved and looked after for so many decades in a small Czech town without any Hungarian inhabitants. 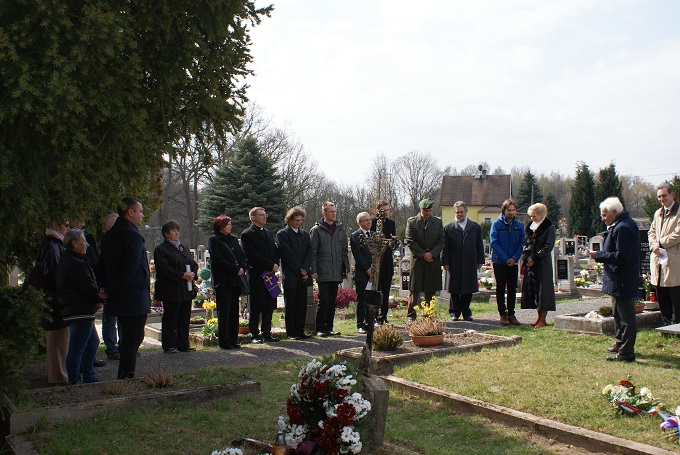 László Dunai expressed his gratitude on behalf of the university to all those who helped to maintain the graves and organise this memorial service: the relatives, the Hungarian Embassy in Prague, the Association of Hungarians in the Czech Republic, the Ady Endre Student Association in Prague and the citizens of Hazlov. 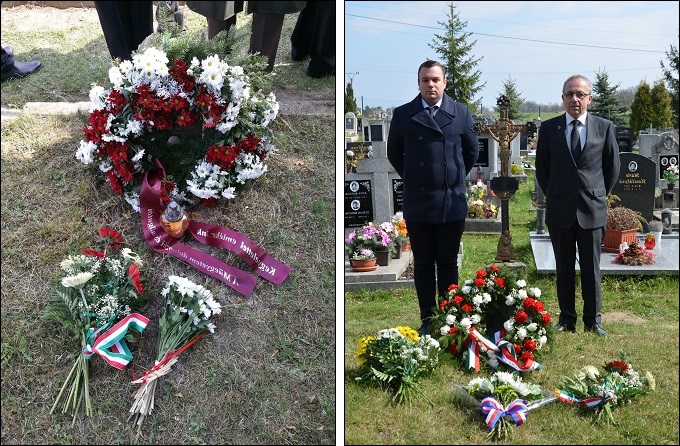 The students of the university were represented at the memorial service by Richárd Suhajda, vice president of the Students’ Union (EHK), who told bme.hu: it would be unimaginable today to draft students for military service from one day to the next in this way. He found it shocking that these students had to study, sit for exams and pass comprehensive exams in different locations. He added: “I have just the same respect for the professors who chose to travel with their students, leaving their loved ones and their work behind in spite of the fact that they were not obliged to do so”. The vice president of the Students’ Union imagined that the students of the University of Technology who set off to Germany in 1944 had been a closely-knit, cheerful group: “we have managed to preserve their positive attitude, team spirit and resourcefulness even today”. Richárd Suhajda concluded by saying that he hoped “that the current community of the university managed to demonstrate the same determination and team-spirit whenever they faced an unusual situation”. 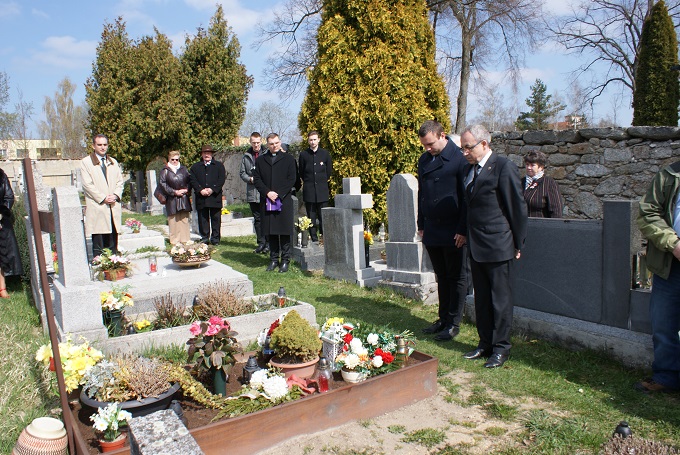 “The people in these graves were mostly young people who did not chose Hazlov as their final destination, but ended up staying here for eternity. The only reason for this is that they were in the wrong place at the wrong time”, said the Mayor of Hazlov, Lenka Dvořáková. 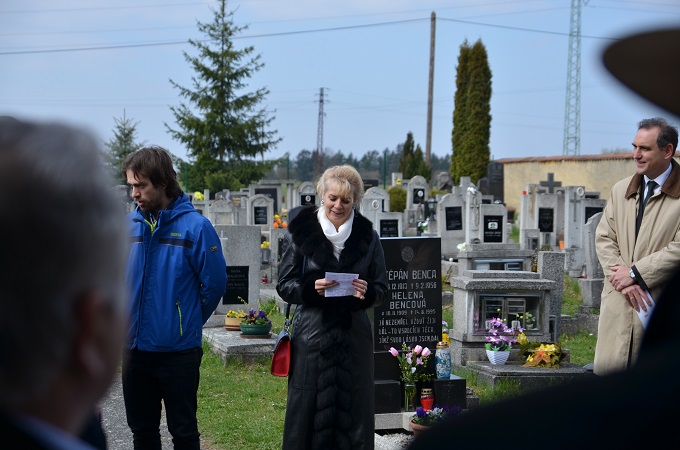 In his speech, Miklós Boros, Hungarian Ambassador to Prague, expressed his gratitude to the locals, including the family of the recently deceased Alžběta Sztuková, for looking after the mass graves of the Hungarian victims for decades (Editor's note: Alžběta Sztuková was a young girl at the time of the bomb attack. Her parents helped the injured victims and she had been tending to the graves until her death). László Dunai stressed in his answer to bme.hu: he met another old lady of Hungarian origin who lived there and would light a candle from time to time up to this day in remembrance of the fallen students. 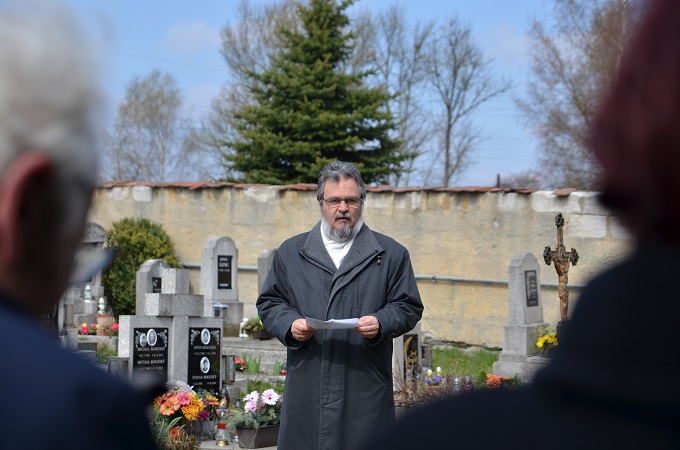 The memorial service was attended by other staff members of Hungary’s embassy in Prague: Deputy Head of Mission Dávid Szesztai, who has connections to BME through his parents, director of Hungary’s Cultural Institute in Prague Gertrúd Kelemen and defence, military and air attaché colonel Zsolt Annus. Speeches were delivered by Barbora Majová, head of the Karlovy Vary section of the Association of Hungarians in the Czech Republic (representatives of the Plzeň section of the association were also present) and Ádám Szily from Hamburg, who is the son of József Szily, a BME professor buried in the mass grave. 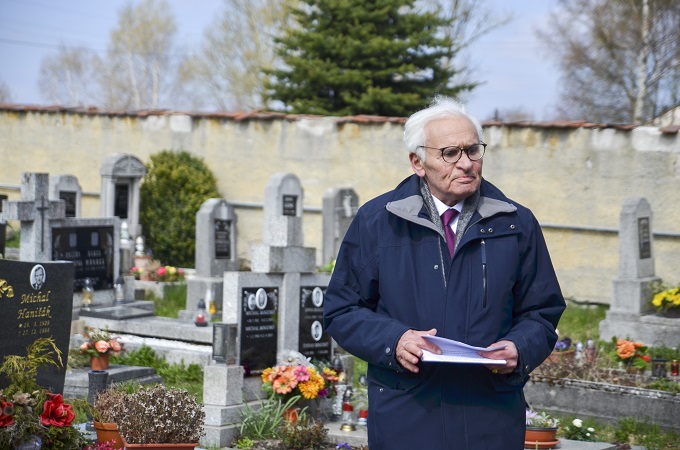 Zoltán Balga, the priest of the Hungarian Catholic Parish in Prague said a prayer by the graves. 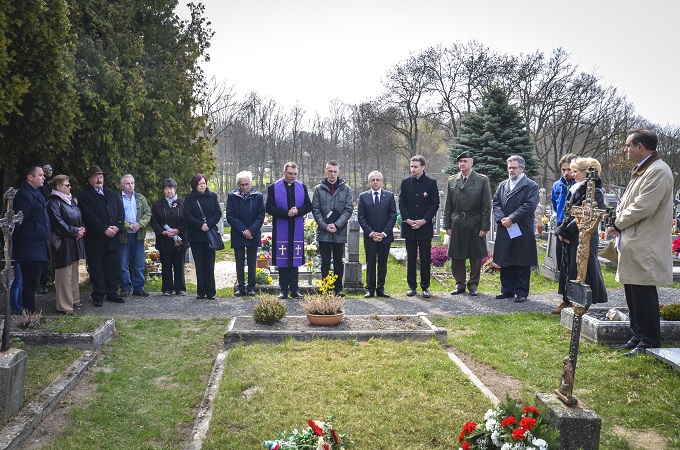 A memorial plaque was displayed in the Hazlov cemetery almost 25 years ago, on 13 June 1995 with the following inscription: “With deepest sympathies, in memory of the Hungarian students who lost their lives on 11 April 1945 in a low-altitude bombing raid and are buried here. The staff and former colleagues of the Technical University of Budapest. 1995”

Last summer the Executive Meeting of BME decided to support the university’s involvement in the maintenance and care of the mass graves. According to the plans, next year, on the 75th anniversary of the bombing the cross erected on the graves will be restored and the memorial site will be renovated: another memorial plaque will be displayed in memory of the BME students and professors who passed away in the hospital of the nearby town. 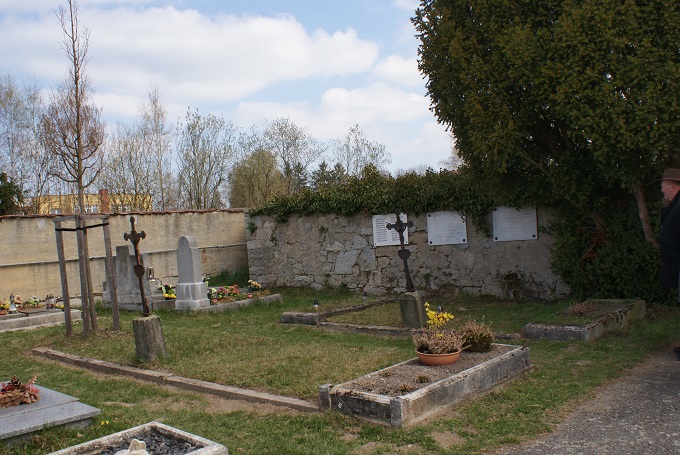 The Ady Endre Student Association in Prague will have a significant role in these endeavours. Their representatives (mostly young Hungarians living in Slovakia and studying technology in Czech universities) also took part in the memorial service. 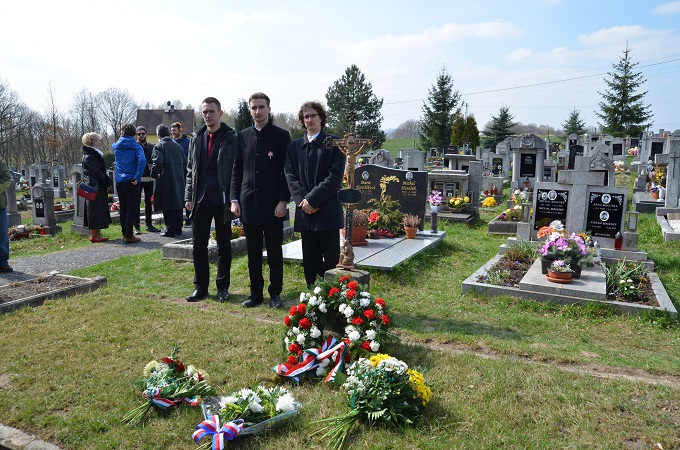 “The watchman's house, in the vicinity of the area which was targeted by the raid, is still standing just outside of the village. Passing by the fields and listening to the speeches and the stories I had a vivid image of the people fleeing from the railway lines toward the forest. This scenery made the biggest impression on me during my visit”, explained Richárd Suhajda and László Dunai. They added: every BME citizen should be familiar with this tragic story.

(The short video, made by the local television station about the memorial service is already available – Editor’s note.)