“Our international students build bridges across continents and cultures”

Over 120 students graduated this year from the English-language programme of Budapest University of Technology and Economics.

”It is a great success to reach this milestone in your lives. Take a look from our building onto the Danube river, which connects so many countries. You can see the bridges also, connecting the two sides of the city. For us, our foreign students are the bridges across continents and nations”, Vice-Rector for Education Károly Veszprémi addressed the audience at the graduation ceremony of the English-language programme. He emphasised that these past years had been very valuable for the students: they gained new knowledge, got to know various cultures and customs in a foreign environment while making new friends. But BME also gained a lot from having foreign students, he added, explaining that the university had the opportunity to establish closer links with future engineers and their home countries, where they will return to work after graduation. ”Please spread the word about Budapest University of Technology and Economics and Hungary. Act as our ambassadors back home and around the world. Be proud of the knowledge you acquired here, just the way we are proud of you”, the professor said, adding that ”BME welcomes new graduates returning to further their studies and experience the joy of working as engineers”. 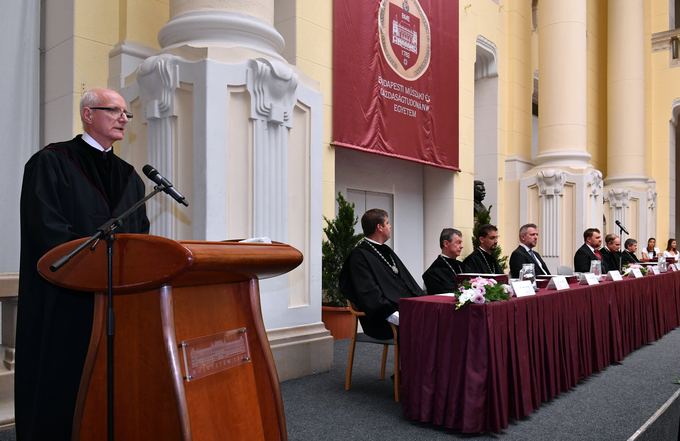 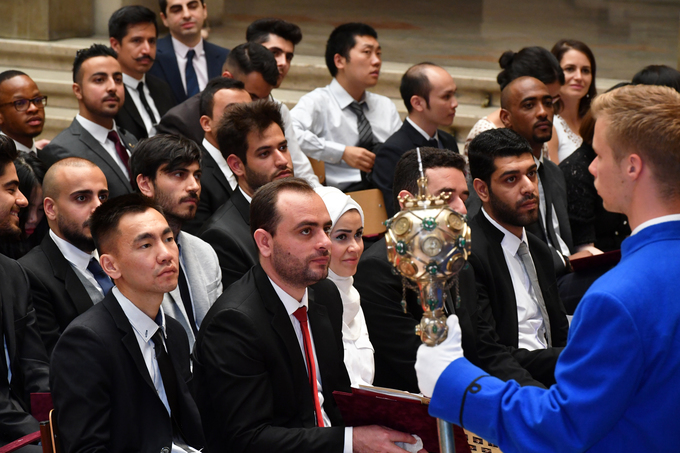 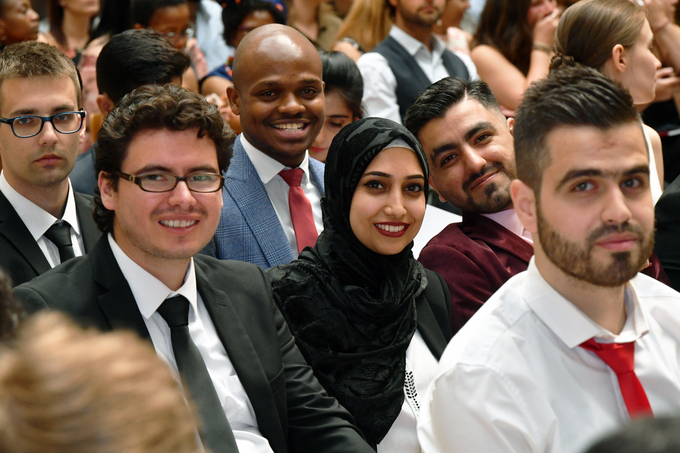 ”My parents always encouraged me to follow my dreams, and I found BME to be a great university to do so in. I started my studies here as a teenager who was raised by very supportive parents. Not only have I learned how to keep up with the compact schedule of the courses, but also I had to learn how to become an independent individual who is in charge of every single thing that may happen in his everyday life”, emphasised BSc civil engineering graduate Seyed Ala Ashrafi in his farewell speech. He explained that it had been a completely new life for him, which had been made easier by the warm welcome and new friends. He expressed his gratitude for the help of his instructors, professors, university staff and his family. He finished his speech with something that he learnt during the last few years: ”you can spend time to get experience, but talent and intelligence will only find their way to you if you are in love with what you do”. 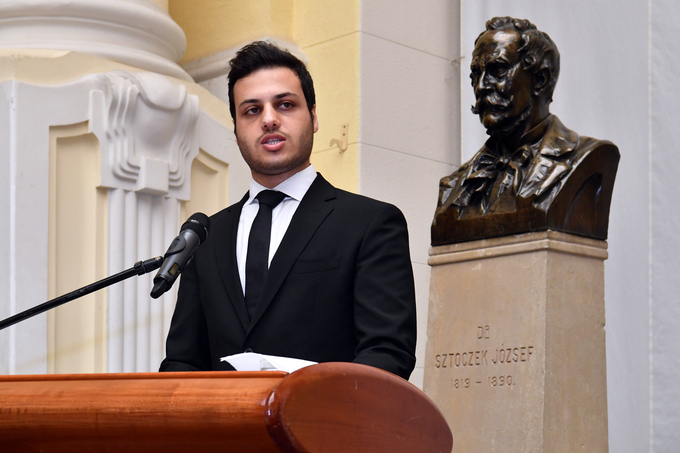 ”The same institution that provided solid foundations for Nobel prizes in the past, has now provided for our graduation. Personally, I can relate to this University and this country through what were the best years of my life”. MSc transportation engineering graduate Carlos Raul Lima da Frota Araújo turned to the audience, adding that he came here first in 2013 as one of the 800 Brazilian students from an exchange programme called ”Science Without Borders” and continued his studies at BME. He recalled that since then many of these students have become successful professionals, which was beneficial for both countries. He decided there and then to return at the first opportunity he had: in 2017 he was here again for another term, this time with the Stipendium Hungaricum scholarship programme. He explained that BME's dynamism was not only shown by its scientific, technical and cultural programmes, but also the efforts to make everyone feel comfortable, enjoy great experiences as part of the community and make many friends. ”After this day, there will be time for new challenges. It is time to be thankful, it is time to feel proud and trust yourself, after all, you are a graduate student from the great university of BME”, said the young graduate from South America. 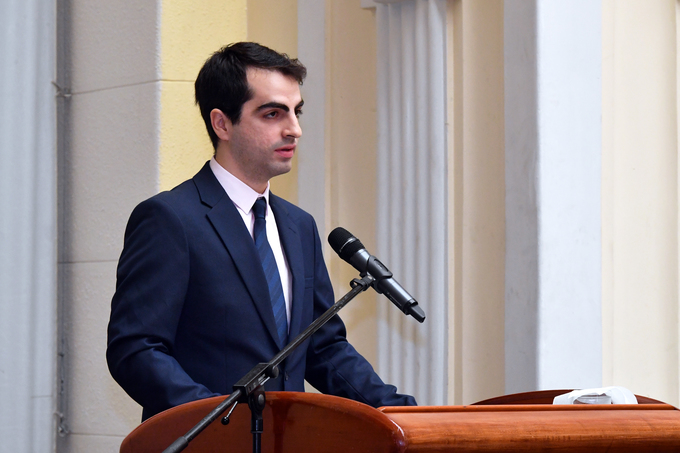 MSc transportation engineering graduate Havraz Khedhir Younis Al-Zibaree gave a farewell speech on behalf of the graduates with merit. ”BME was not only a scientific medium for acquiring explicit information and scientific certificates, but it was also a platform for learning plenty of tacit knowledge and practical lessons about what life is about and realising ourselves as useful human beings in this world”, he stressed, recalling the easier, as well as the harder, more demanding periods of being a student. He emphasised that many of the students had come from different countries and cultures, learning how to bring together the beautiful diversities and similarities, and creating their own community. He expressed his gratitude to the teachers and professors, who were not only motivators and masters, but also like friends and soul parents who always took care of their students and guided them to the right path. 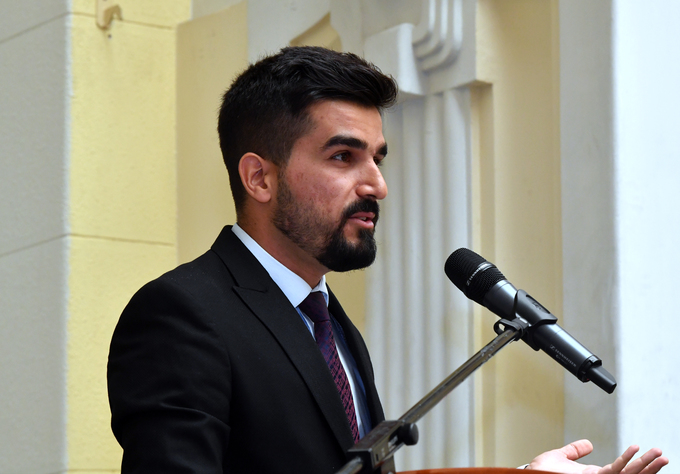 The results of successful studies can become even more valuable if young professionals stay in touch with each other and with Hungary in the future, stressed Eszter Végh, who congratulated the graduates on behalf of Tempus Public Foundation, adding that the organisation's website is a great help in facilitating the communication between former graduates who studied in Hungary. 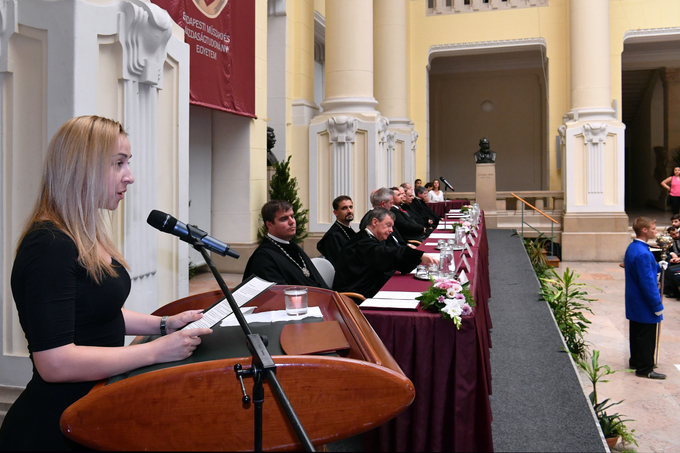 The master of the award ceremony quoted the words of prominent English theoretical physicist Stephen Hawking, who passed away last year. ”Remember to look up at the stars and not down at your feet. Never give up work. Work gives you meaning and purpose and life is empty without it. If you are lucky enough to find love, remember it is rare and don't throw it away”, said György Ádám Horváth as a farewell. 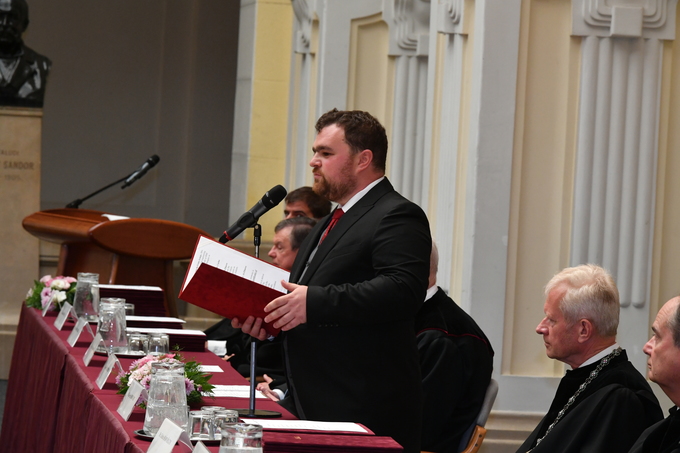 At the end of the 2018-19 academic year 122 students received their diplomas, 52 of them with merit. 80% of the new engineers took part in the Stipendium Hungaricum scholarship programme. Graduates came from 37 countries, most of them (15) from China, but many arrived from Syria, Jordan, Pakistan and Brazil. 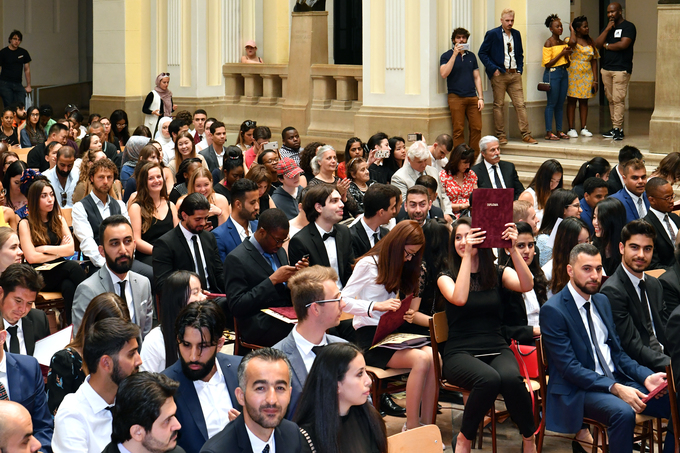 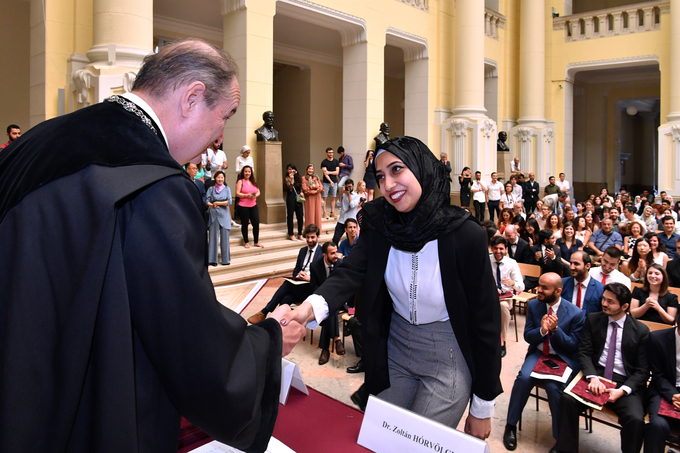 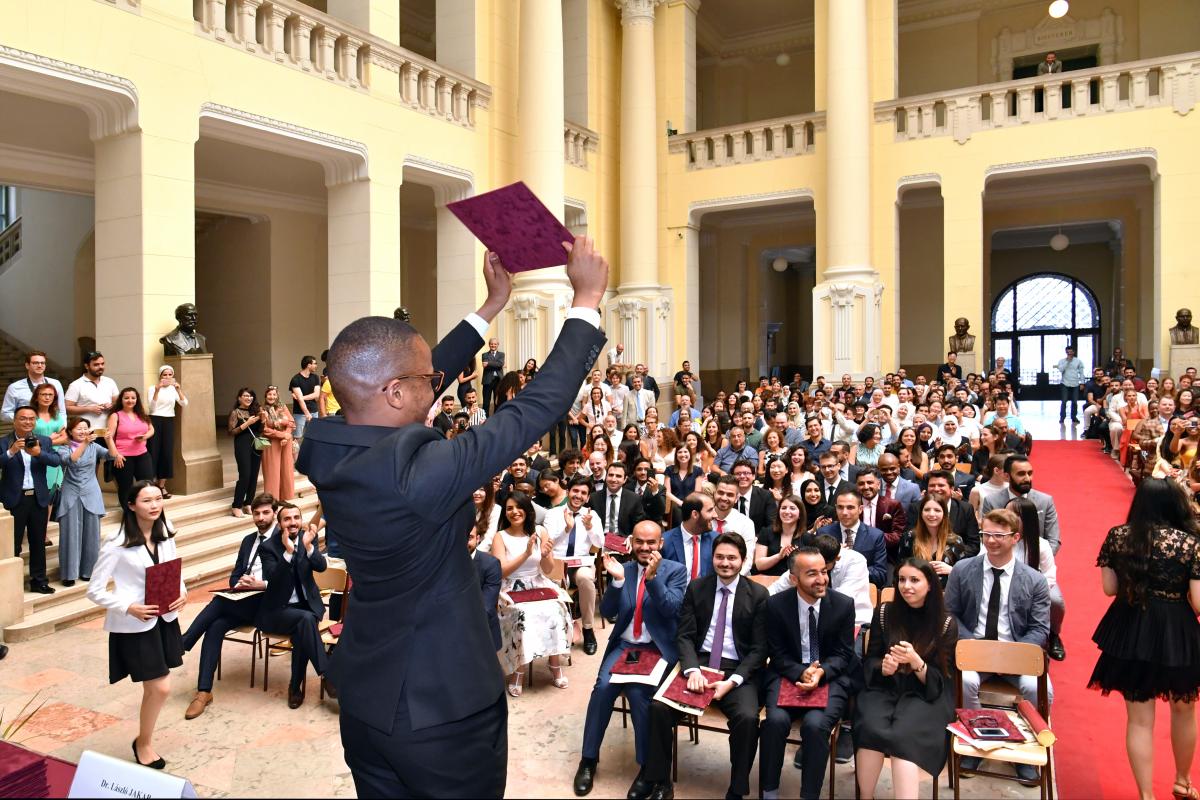 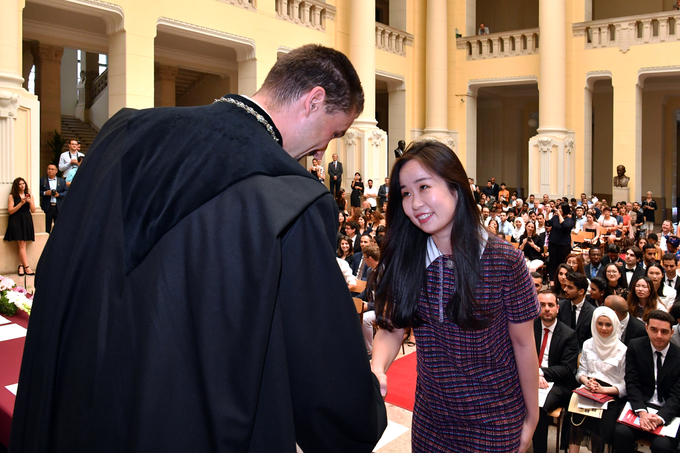 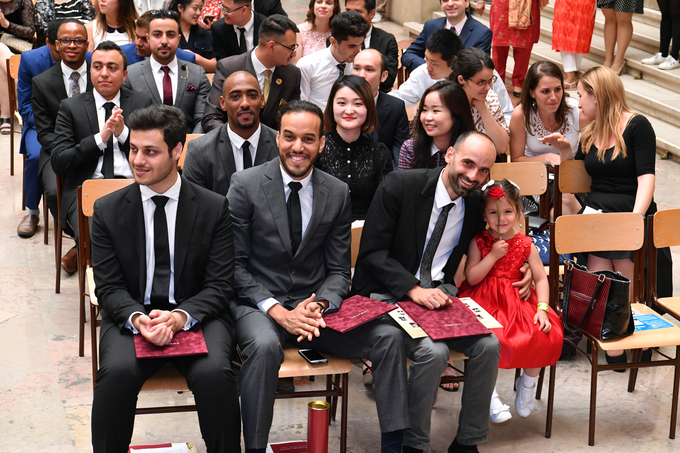 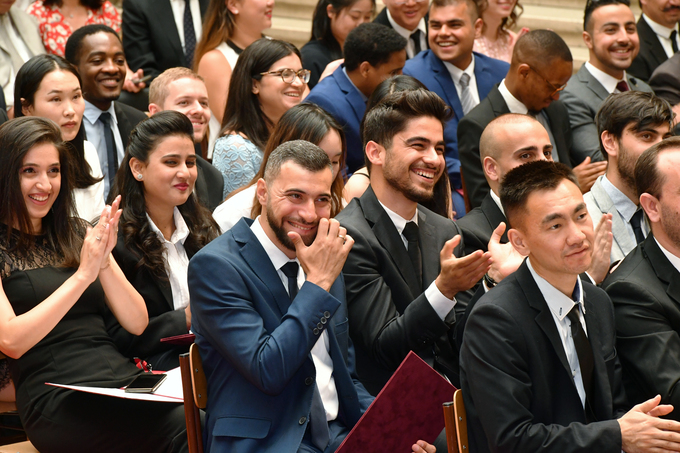 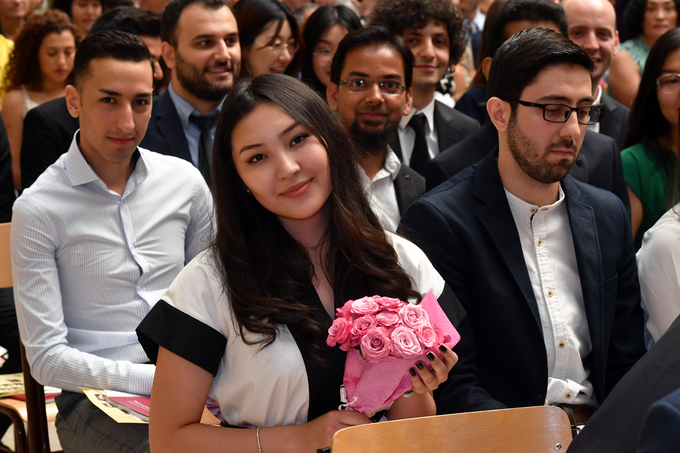 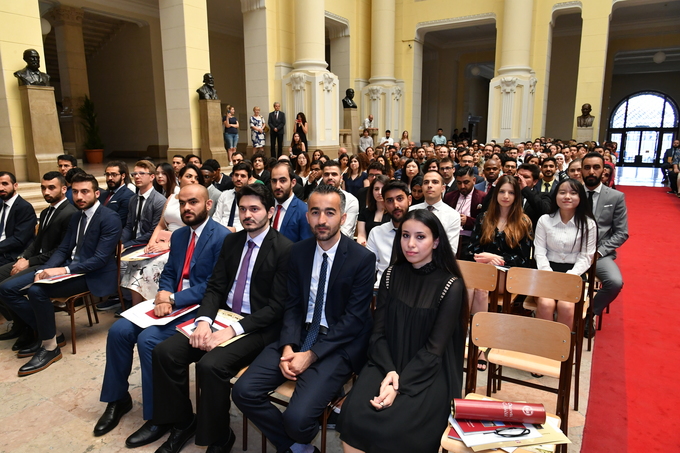 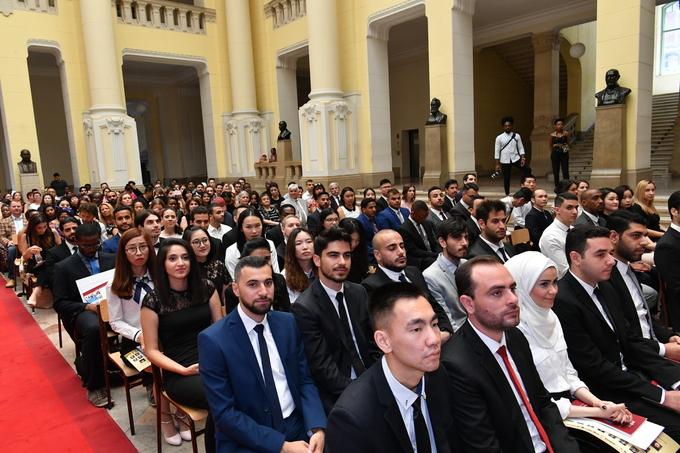 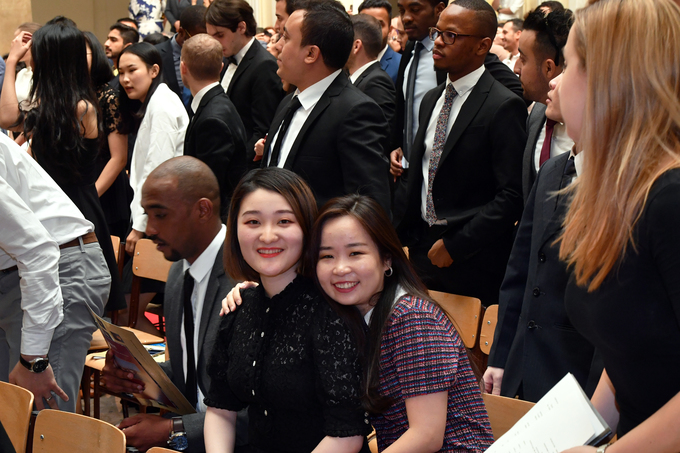