“We studied the connection between memory and creation in architecture”

The dean, teaching staff and students from the Faculty of Architecture participated in a professional collaboration with Philippe Prost, Parisian professor of architecture who visited Hungary at the invitation of the French Institute of Budapest.

“We successfully finished our two-day programme series where all the sessions were designed to focus on the connections between memory and creation. The events where this extremely broad topic was discussed were particularly important and informative as the interpretation of the past in the present together with experiencing and communicating memories for the future remain a permanent responsibility of architectural activities, said Levente Szabó, associate professor of the Department of Public Building Design at BME’s Faculty of Architecture (ÉPK) after the conference, student design competition and TDK session held on October 11–12 2018. (Editor note: bme.hu earlier published an interview with the architect about his art and works.)

At the conference on October 11, Philippe Prost and Levente Szabó shared their views on the connection between architectural heritage, creation and memory. 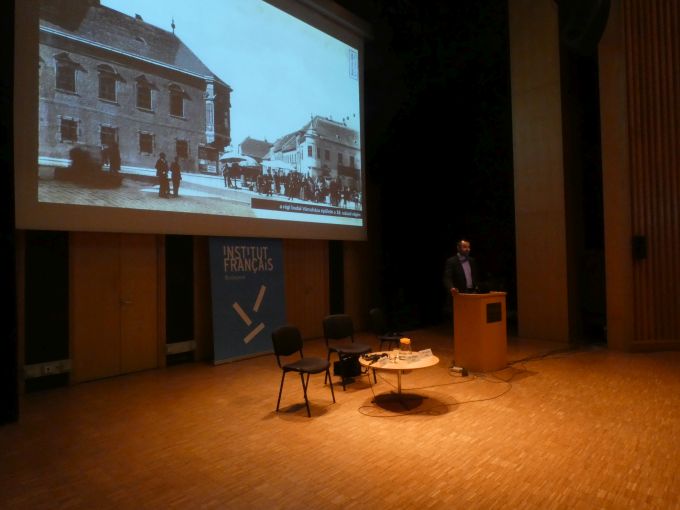 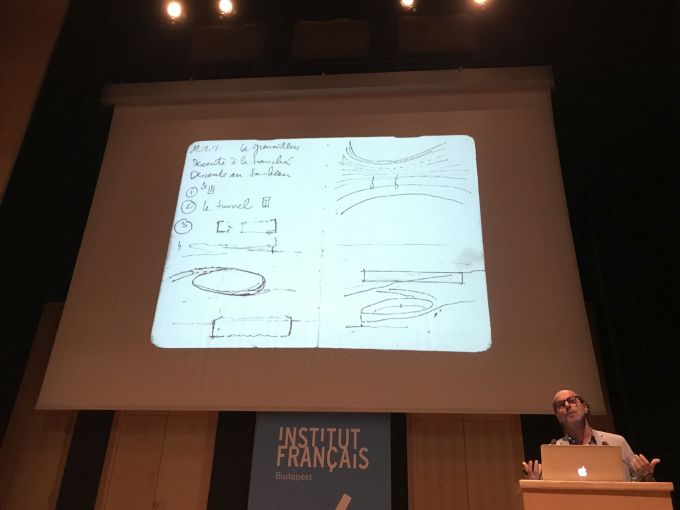 Their presentations were followed by a round table discussion on the role played by memory and architecture in the identity of communities moderated by Melinda Benkő, associate professor and head of ÉPK’s Department of Urban Planning and Design.

The next programme scheduled was a business breakfast on October 12 hosted by György Alföldi, dean of the Faculty of Architecture including Philippe Prost, Cathrine Seyler, head of the design office AAPP Atelier d’Architecture Philippe Prost and Sebastien Reymond, attaché for technical, scientific and university cooperation at the French Institute of Budapest. The faculty leaders in attendance and Philippe Prost as the professor and president of the EcoleNationaleSupérieured’Architecture de Paris-Belleville in Paris agreed to establish long term professional cooperation between the two institutions planned to include further co-hosted events, teacher and student mobility programmes as well as joint participation in potential future projects. 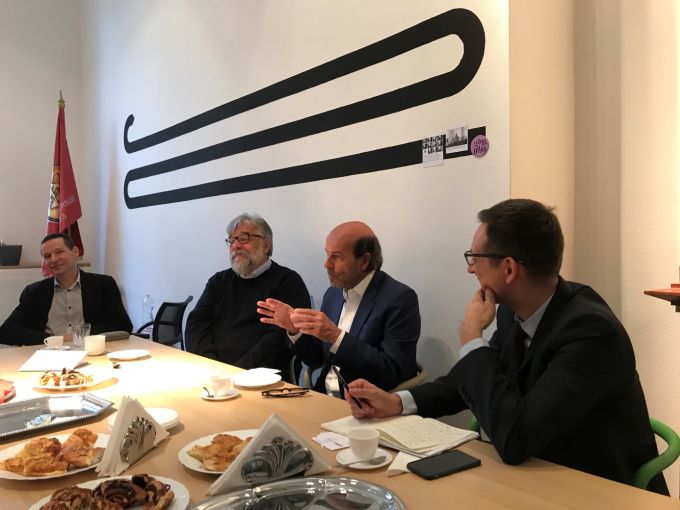 István Bartók, ÉPK’s associate professor, György Alföldi, dean, Philippe Prost, professor of architecture and Sebastien Reymond, attaché for technical, scientific and university cooperation at the business breakfast discussing the collaboration between the Faculty of Architecture and the EcoleNationaleSupérieured’Architecture de Paris-Belleville in Paris.

Another significant event, particularly key for the education of architecture students, was the MEMORY & INSPIRATION student workshop for which the well-known Parisian architect was asked to act as moderator. 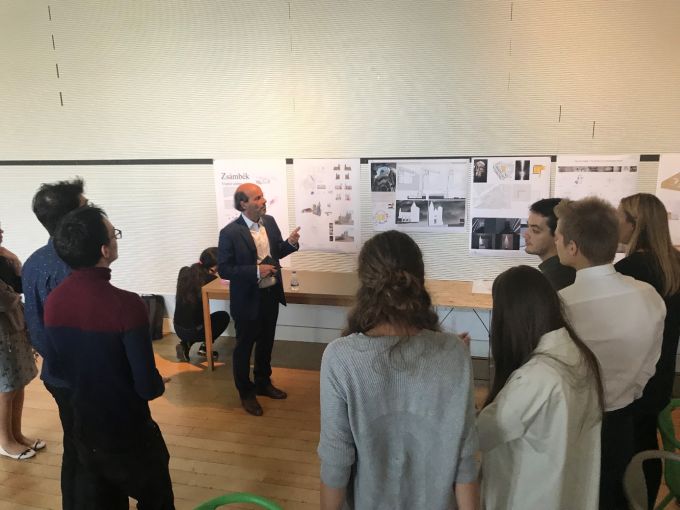 Philippe Prost at the student workshop co-hosted by BME’s Department for the History of Architecture and of Monuments, the Department of Public Building Design and the French Institute of Budapest

The forum included the formal presentation of preliminary designs submitted for the design competition announced for BME’s students in September. As a follow-up, the competing teams of two will present their designs in a session at the TDK conference in November focusing specifically on this subject, with professor Prost expected to be participating, which means they will appear in front of an international jury. 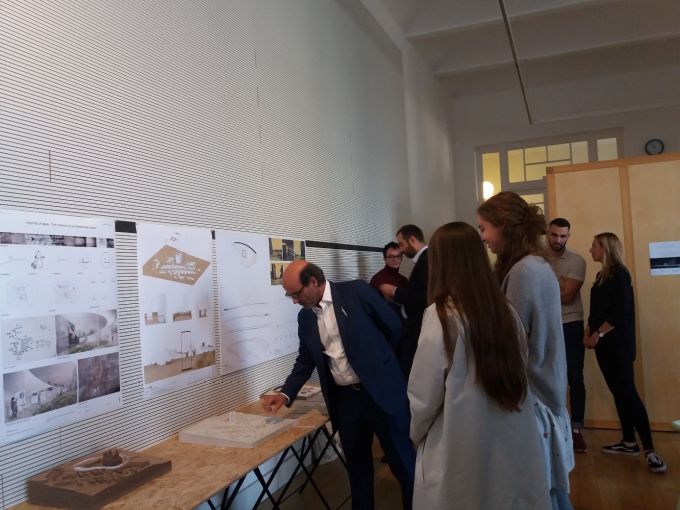 Philippe Prost and the applicants of the international student design competition

The workshop focused on the area around the ruins of the former Premonstratensian provostry church in Zsámbék, which offered a unique location to develop design concepts combining the duality of memory and modern creation as it carries the signs of nearly every period and important moments in Hungary’s history since the 11th century up to today.

The workshop was organized by Krisztina Fehér and Levente Szabó while a number of ÉPK’s lecturers were involved in the special international design programme as consultants to the students. The event was also attended by Csilla Mónika Balázs, director of ZsámbékiMűvelődésiIntézet cultural centre and Zsuzsanna Marthi, Zsámbék’s chief municipal architect, who was very pleased with the selected subject matter and invited the architecture students to showcase their designs in Zsámbék too as “the protection, preservation and modern management of the church ruins in Zsámbék as one of Hungary’s most significant monuments is an extremely important responsibility of today’s architecture”. The organizers chose this location partly to draw the public’s attention to this mediaeval artefact.

Before the workshop, Philippe Prost and the organisers visited the location lying close to Budapest whose rich cultural and historical layers together with the monumentality of the church provided him with inspiration for the evaluation of the student designs. The Parisian architect offered to award the winning applicants a two-month professional internship to be completed with a grant from the French Institute of Budapest. 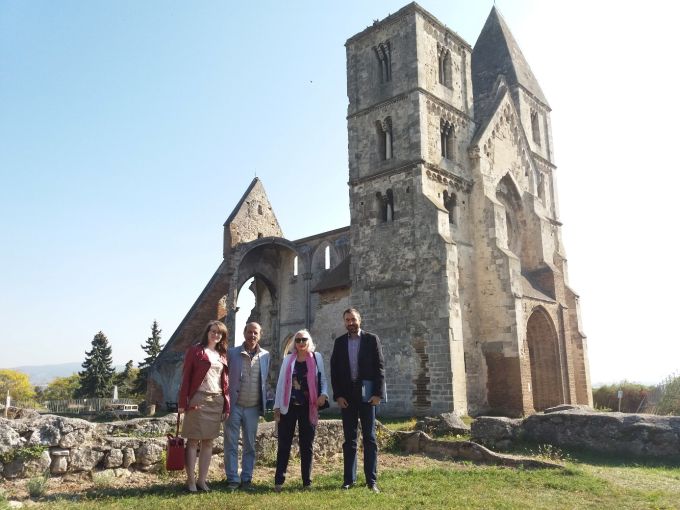 Krisztina Fehér, Philippe Prost, Catherine Seyler and Levente Szabó on the site visit before the international student workshop in front the church in Zsámbék

At the end of the programme series, Pascale Andréani, France’s ambassador to Hungary hosted a business lunch for the participants (including György Alföldi, dean, dr. János Krähling, Melinda Benkő, Krisztina Fehér and Levente Szabó from the Faculty of Architecture) where they discussed the special features of the two countries’ architect training programmes, the conference presentations and the connection between architecture and memory. 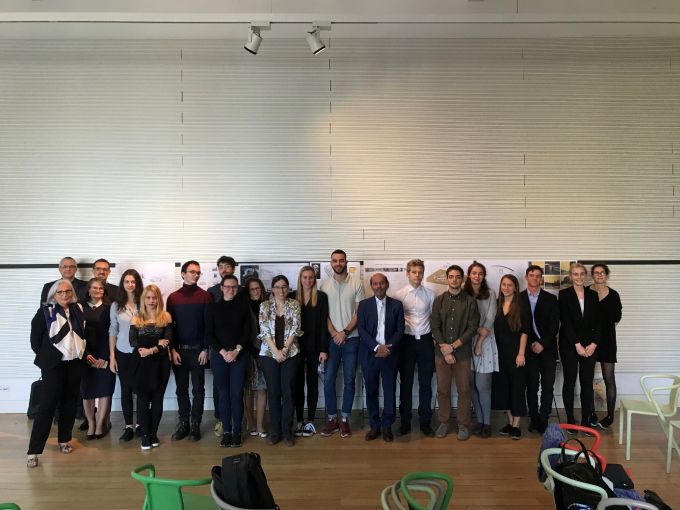