The mathematical, historical and personal background of code-breaking discussed at one of the key events of the Hungarian Science Festival.

“Cryptography, the encryption of information and error-correction coding have undergone a significant evolutionary change from the Second World War on. These days, coupled with digital technology, mathematical algorithms, algebra, finite geometry and the theory of discrete mathematics are also used to make internet sites unbreakable. We wanted to highlight the importance of this subject through the tragic story of the British mathematician and one of the fathers of modern computer science Alan Turing, which also inspired the American filmmakers, while the credibility of the presentations was guaranteed by one of our speakers, a close relative of the professor”, said Gábor Péter Nagy, Associate Professor and Head of the Department of Algebra at the Institute of Mathematics of BME’s Faculty of Natural Sciences, describing the conference entitled: Breaking the Enigma System, one of the Hungarian Science Festival events at Budapest University of Technology and Economics. The event was held at the Assembly Hall of the Hungarian Academy of Sciences (HAS) and was jointly organised by BME’s Institute of Mathematics and the Wacław Felczak Foundation, while also supported by Karol Biernacki, the honorary consul of Poland in Szeged. 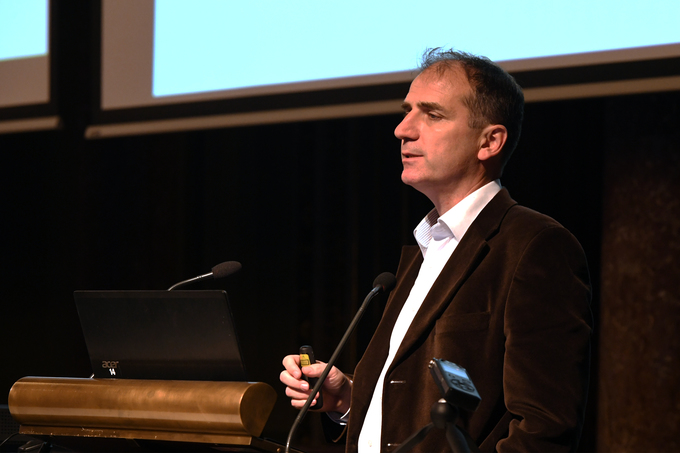 BME’s professor talked about the history and the modern fundamental concepts of cryptography. He explained in detail the operation of the Enigma system, which was originally used to protect commercial information and the confidential communication of financial institutions before being used for military purposes during the Second World War. 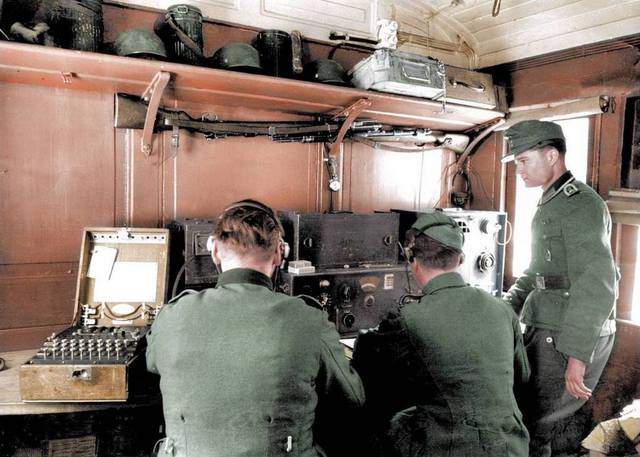 A code-breaker unit of mathematicians was set up by the Polish government as early as the 1930s to break the coding which was considered reliable and unbreakable. They achieved ground-breaking results by the end of the decade. They shared their experiences with the French and British secret services just days before the outbreak of the Second World War. The British established a separate unit of researchers, based in Bletchley Park near London, which was led by Alan Turing.

Breaking with traditional methods, the researchers used electromechanical and electronic computers to read the Enigma messages, decoding 80,000 such messages per month in 1943, which is 2,500 per day. Some historians believe that this scientific breakthrough significantly shortened the Second World War and heavily influenced its outcome. The details of the code-breaking operation were shrouded in secrecy until the 1990s”, Gábor Nagy explained in his lecture. To demonstrate the story, a functioning Enigma machine, borrowed from the Museum of Technology and Industry in Warsaw, was presented. 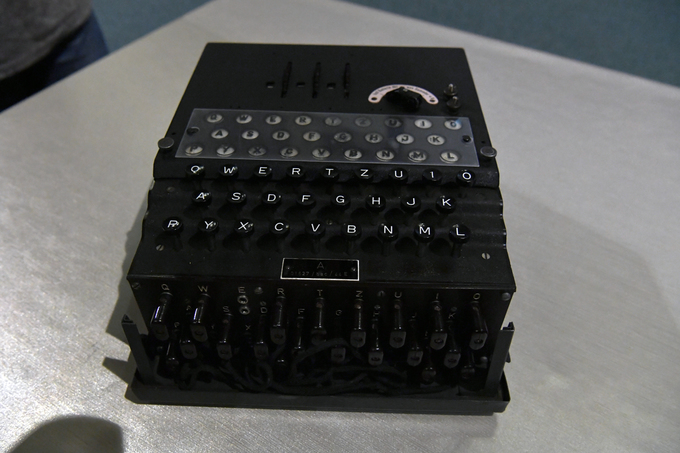 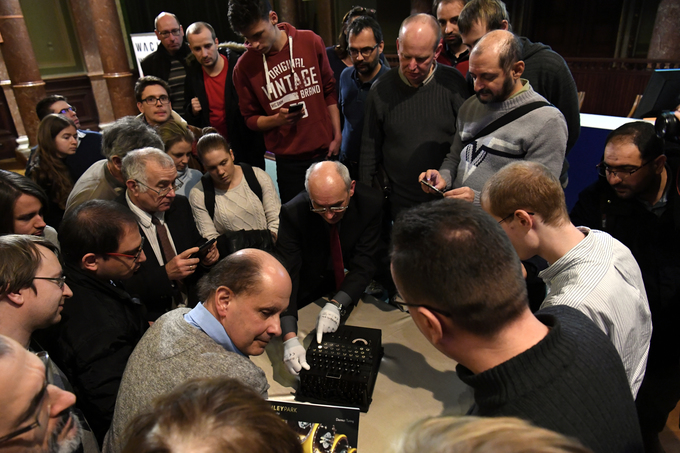 “Alan Turing was a brilliant scientist, but his private life was riddled with tragic events. In spite of his scientific achievements he was prosecuted in 1952 for homosexual acts. He chose chemical castration treatment and thus was able to keep his academic position and avoid prison, but later he lost his job despite his outstanding results, which led to a mental breakdown. Two years later he died in debatable circumstances; presumably he committed suicide after eating half an apple laced with cyanide. In 2013 Queen Elizabeth II granted him a posthumous pardon. His life story was made into two films: in 1996 and in 2014”, BME’s professor said about the British scientist. The special guest speaker of the conference, the mathematician's nephew Sir Dermot Turing added personal and family memories to describe in more detail the events in Britain, the background of the story and its consequences. He previously worked for the Government’s Legal Service and an international law firm before specialising in financial sector regulation, particularly the problems associated with financially instable banks and financial market infrastructure. He is also a trustee of Bletchley Park and of the Turing Trust, and has published several monographs on his uncle’s life (his latest book was published in September 2018, entitled: XY&Z: The Real Story of How Enigma Was Broken). 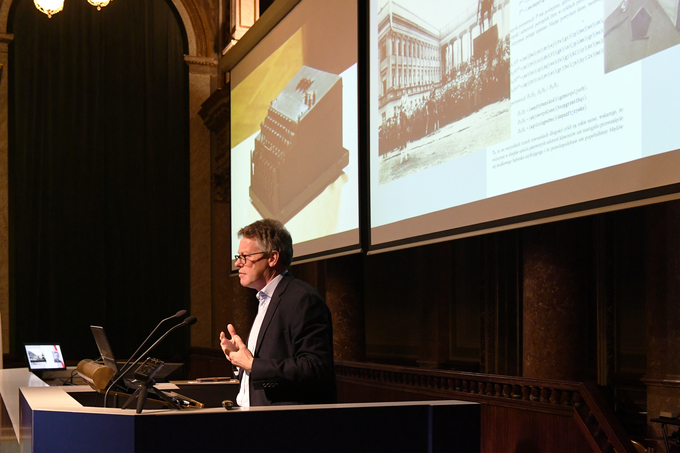 “Encryption is currently the most researched area within mathematics, IT and technology, but it is also focused upon because of the importance of secure communication and data storage”, Gábor Nagy said about the relevance of the topic. He primarily addressed the young people in the audience, contemplating their career choices, and their parents when underlining the importance of natural science subjects, adding that “graduates with a degree in mathematics are very much sought after in the labour market, being favourites with the secret services and IT companies, the latter employing them to find solutions for the challenges of internet security. Apart from mathematical expertise, such jobs also require complex engineering and IT skills, which can be acquired at BME”, the professor explained, encouraging young people to have a career in natural sciences. 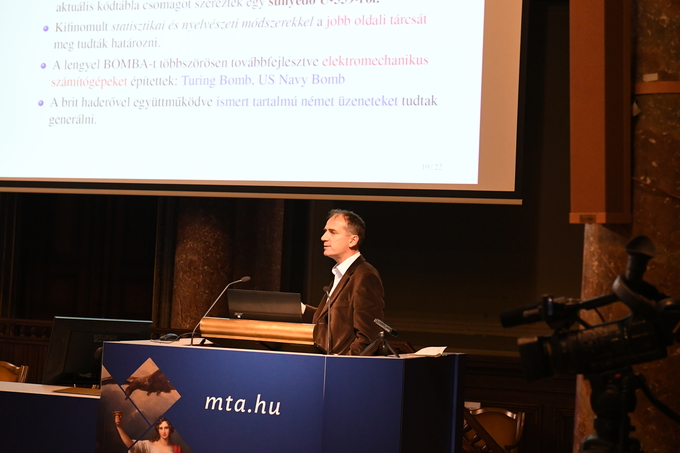 Gábor Nagy used Turing’s example to talk about a new research programme, launched at BME this October in cooperation with the University of Debrecen and the University of Szeged. The aim of the project entitled “SETIT - Technologies to increase the security of IoT systems”, financed by the National Research, Development and Innovation Office, is to research the IT security risks of the IoT (Internet of Things) and develop technologies which reduce these risks, thus facilitating the wider use of IoT applications. “For us mathematicians, the challenge is to find theoretical solutions, which remain relevant even after decades of a news-ban, just like Enigma. We have to understand theoretical considerations, which are ahead of their practical implementation by 10-20 years”, the professor said when describing the tasks of the experts. He also used the example of high-performance quantum computers, the development of which has been ongoing for several decades, but still remains a theory.

The lectures of BME’s Faculty of Natural Sciences were attended by hundreds of secondary school pupils, their parents, university students and lecturers, mathematicians and science enthusiasts. “We decided to choose a topic, which goes beyond our narrow field of expertise and can be interesting and enjoyable for our visitors, who are open to the different branches of natural sciences. We hope that we managed to make this topic and our profession more attractive to members of the audience, so that more young people consider mathematics as a career choice and perhaps decide to study here at BME for a degree”, Gábor Péter Nagy explained to bme.hu. 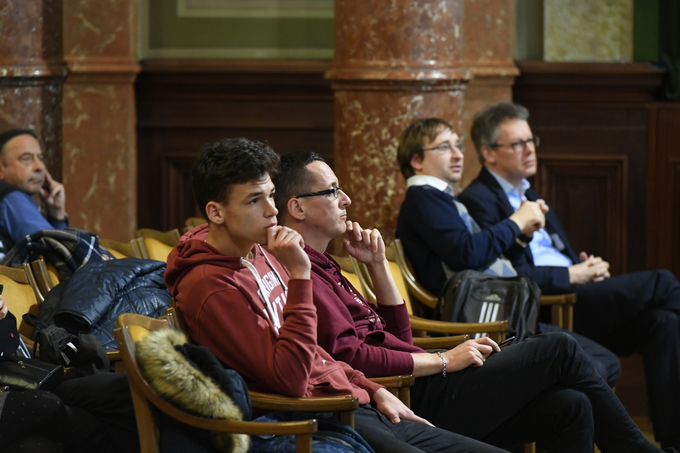 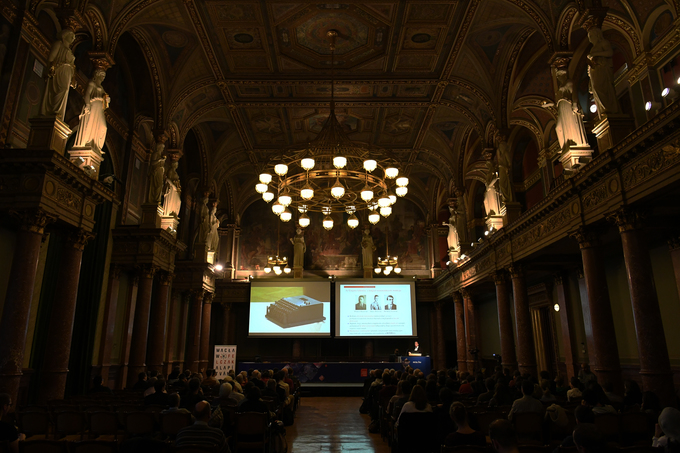