Upon finishing their studies at BME's English-language bachelor's and master's programmes, close to a hundred students received their diplomas at the graduation ceremony.

”Your voyage on the flagship of Hungary's engineering higher education has come to an end, and now you are embarking on a new journey”, were the welcoming words of Vice-Rector for Education Károly Veszprémi, with which he addressed the new graduates in the Assembly Hall of BME's Central Building. He went on to say that despite all the hardships of the past few years, the students had enjoyed their time here. ”Instead of being passive passengers, you were active participants in your programmes: laden with obligations, you had to work hard, but fortunately behind a desk instead of on board a ship, which is a big difference”, he explained, adding that he hoped that all their efforts would yield dividends. ”The knowledge and competencies acquired during your studies will give you a solid foundation, onto which you can build in the future”, the professor stressed, continuing that he hoped to see many of the new graduates return to BME for further studies or to build partnerships between the university and their profession or prospective employers. 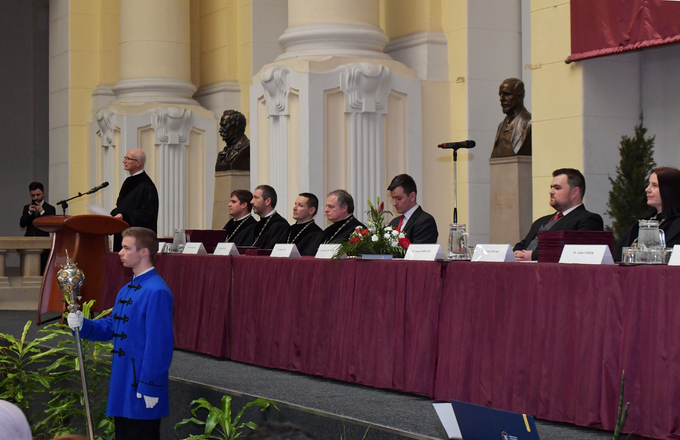 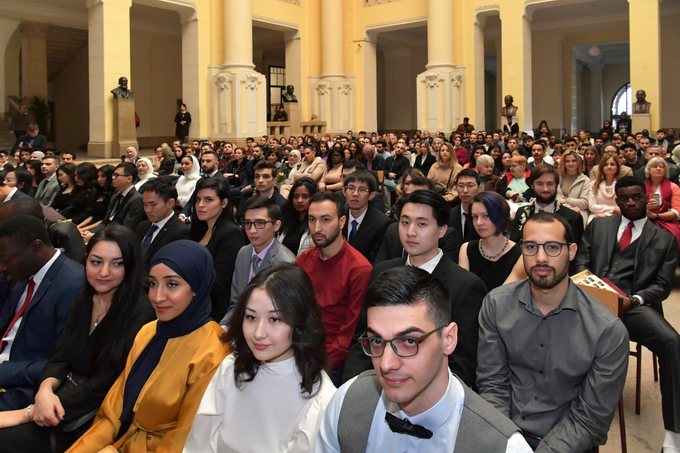 ”We have fond memories of our foreign students and we hope that they have fond memories of us too. We trust we have given our best during the time we spent together”, said Máté Igaz, on behalf of the mentoring team in his farewell speech. Recalling the first event organised outside the university he said: at the end of a whole day's sightseeing in Budapest participants truly felt like members of the ”large BME family”. 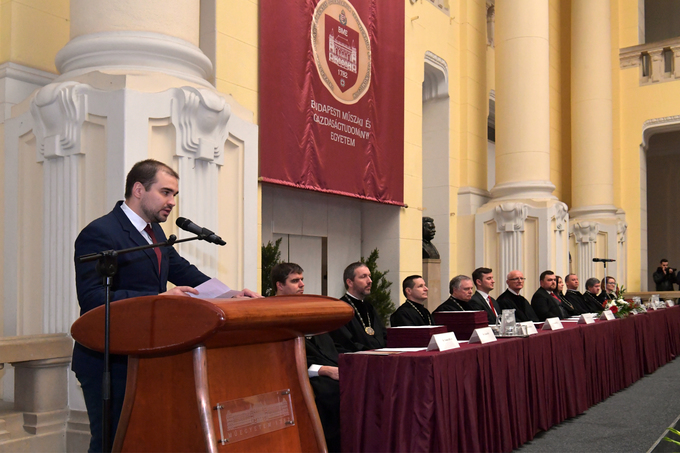 ”I am certain that just like me, all my fellow graduating students have mixed emotions right now”, said Khalil Mohammad, MSc civil engineering student from Syria at the start of his speech addressing the audience on behalf of the new graduates. In his words, receiving the diploma was a dream of many years come true: anxiously awaiting the joyous moment, a new chapter in the lives of the students, who also have a heavy heart, because they have to say goodbye to the university and to their friends. During these years they not only acquired a sound professional knowledge, but also learnt how to live together with and accept the culture of their fellow students who came here from all corners of the world to build a better future together. He expressed his gratitude to the professors who helped to overcome any challenges, the Tempus Public Foundation for their support, the Stipendium Hungaricum scholarship programme and ”the heroes in the background”: the parents, without whom this achievement could not have been possible. 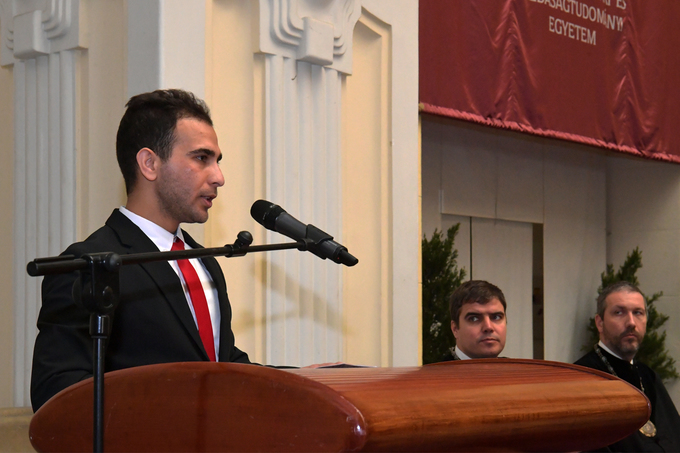 ”I chose BME because of its rich academic background and excellent location in the heart of one of the best cities in Europe”, stressed Mirlan Karimov, MSc mechanical engineering student from Azerbaijan. He went on to say that although he knew quite a lot about the country, its history and culture, it still surprised him in many ways: one of the most important of which was mobility. Having the opportunity to visit other countries on the continent, he travelled to more than 20 states during his studies. He thanked his professors abroad and at BME, who provided valuable help throughout the programme and during his scientific research. He also thanked his family and his fiancée for encouraging him from such a distance. He also mentioned that the Stipendium Hungaricum programme was one of the key factors in his success. ”Today the world around us is changing unprecedently. Mankind has to respond to a multitude of natural, political, health and technological problems. The world needs us more and more every day. It is now our responsibility to take the lead and ensure human betterment”, he concluded. 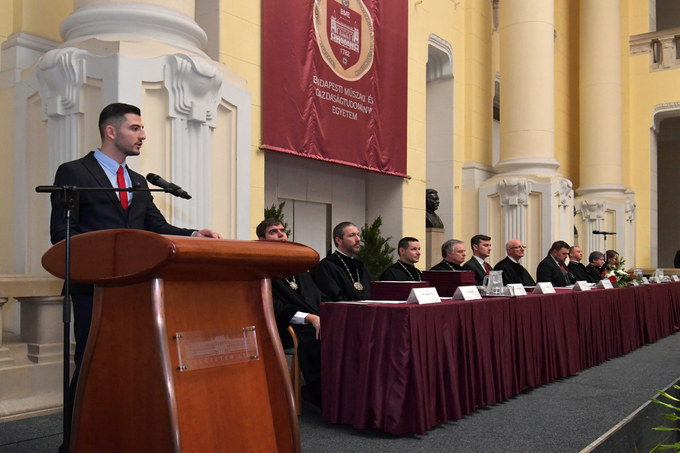 ”It looked very exciting to study at a university which gave three Nobel laureates to the world. However, my peers and I soon realised that life is not a Disney movie, especially not during final examinations at BME”, Irakli Kelbakian, an electrical engineering graduate from Georgia reminisced with some humour on behalf of students who received an honourable mention. He added that during the past seven terms he had always strived for excellence, trying to get the best results. ”It is a great joy for me to receive my diploma and this special award. The greatest joy, however, is the knowledge that I gained, which goes far beyond just learning the course material. He recalled that international carnivals, museum visits and events organised by mentors were a great help in getting to know Hungary and the other students. They also helped to overcome the fatigue of all those busy days spent studying. He touched upon some links in the history of the two nations: ”we promise to treasure and respect Hungary and BME forever”. 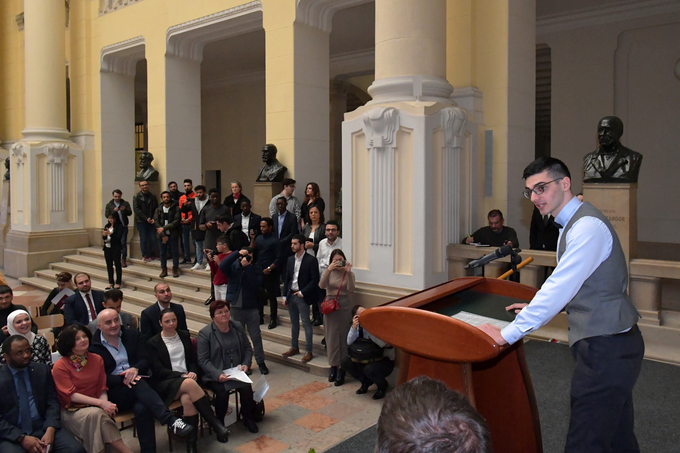 At the ceremony 23 students received an honourable mention for their academic excellence, presented by the heads of their respective faculties, while 6 new graduates were awarded Green Diplomas by Vice-Dean Anikó Grad-Gyenge for the completion of sustainable development courses. 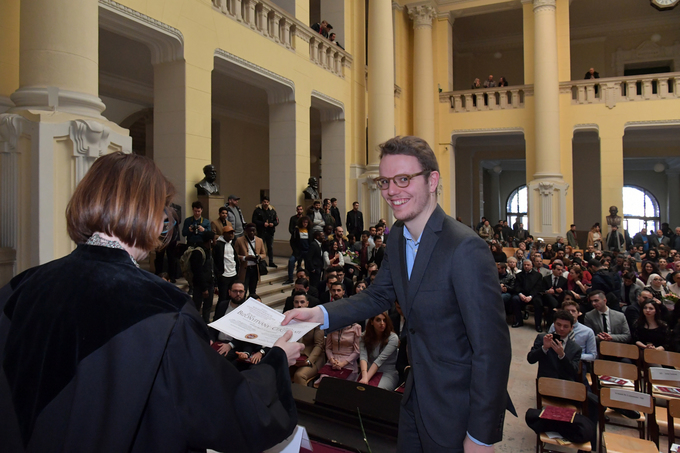 Continuing the tradition, master of the award ceremony György Ádám Horváth said farewell to the graduates with the words of the world famous English physicist, Stephen Hawking: ”Remember to look up at the stars and not down at your feet. Never give up work. Work gives you meaning and purpose and life is empty without it. If you are lucky enough to find love, remember it is rare and don't throw it away. 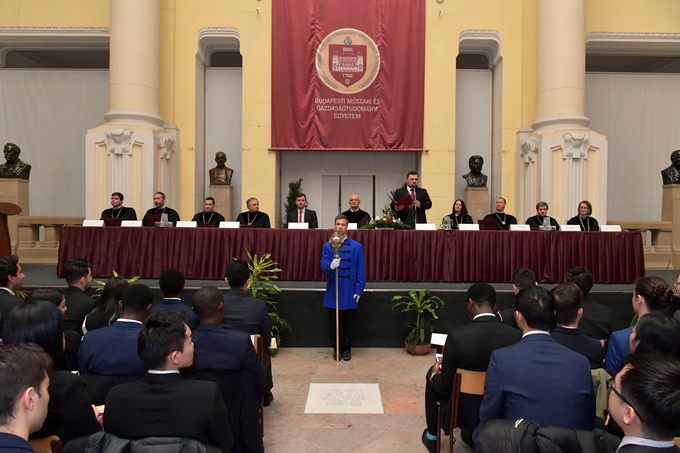 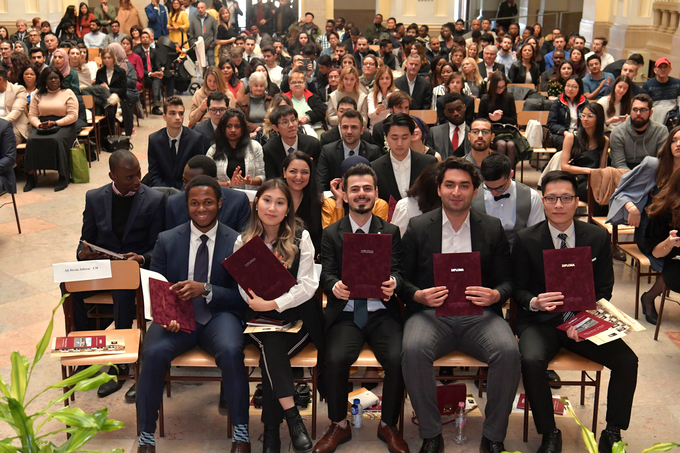 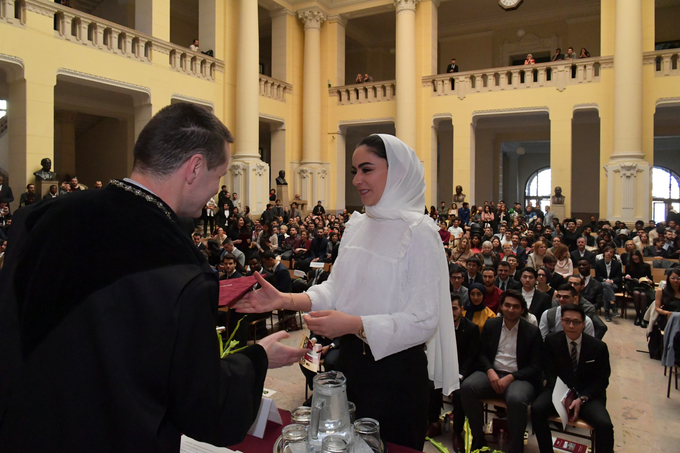 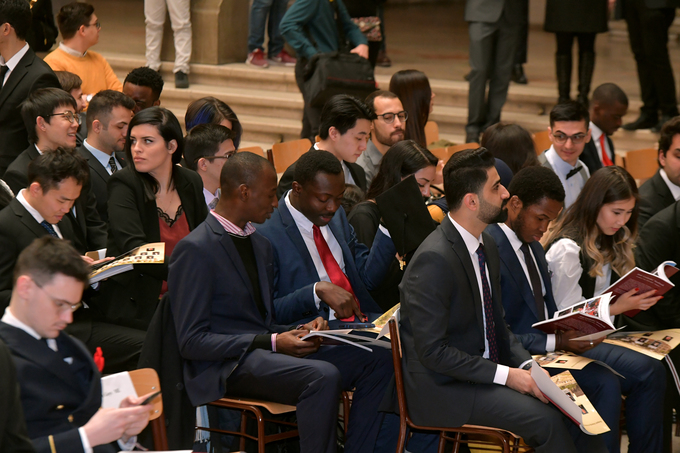 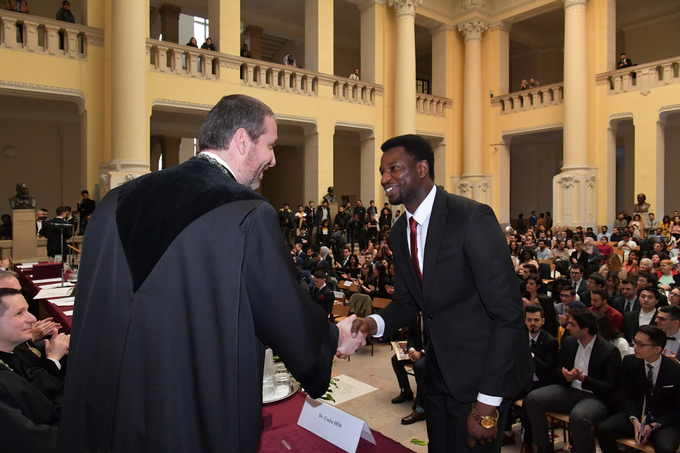 ”There has been significantly more interest in our English-language programmes in recent years, which is a good thing, however it requires complex, precise and extra team efforts on our part”, Valéria Balogh, coordinator for international affairs at the Department of International Relations of the Rector's Office revealed, explaining that for example the final examinations are held in the last days of the exam period. 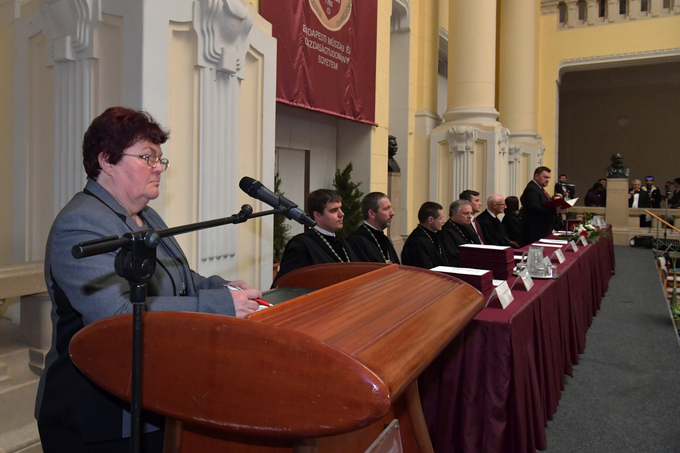 She added that the staff of the Central Office of Studies deserve a big thank you for their work in preparing all the documents, required for issuing the diplomas on time. 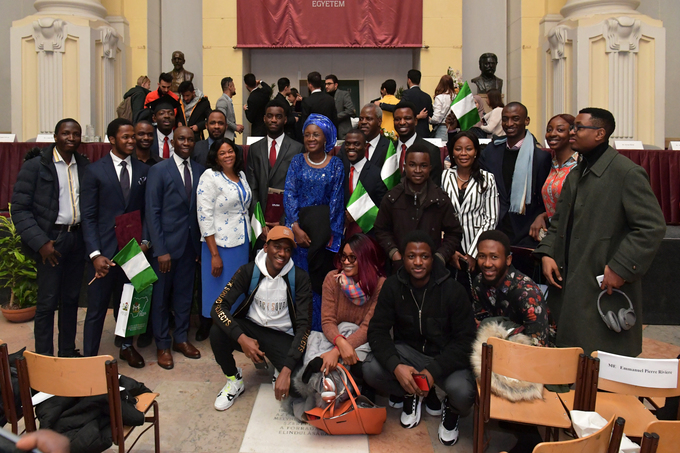 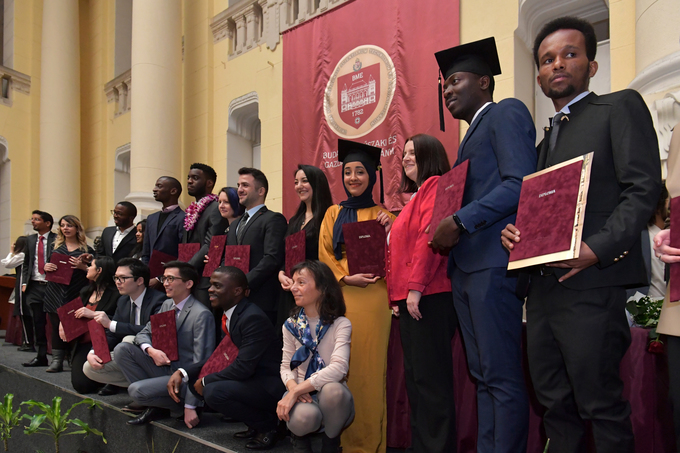