Orbiting the Earth at a height of 350 km for six months, SMOG-P monitors a circular area with a diameter of 4000 km. Using the signals captured by its antenna from this area, it has already made 2000 measurements.

“The world's smallest, 5x5x5cm satellite, developed by BME, has been working smoothly ever since its launch on December 6,” stressed András Gschwindt, honorary associate professor of the Department of Broadband Infocommunications and Electromagnetic Theory at the Faculty of Electrical Engineering and Informatics (VIK) of BME and the head of the SMOG project, adding that the satellite has dual purposes: it enables the proper functioning of the equipment on board while also performing electrosmog measurements based on instructions from the ground and sending the collected data back. He also said that the height of its orbit, which is on average falling by 4 to 5 km every week, suggests that it will not survive until its first anniversary, being predicted to burn up at the end of September as it enters the more dense layers of the atmosphere. (Editor note: the launch of the satellite was covered by bme.hu earlier)

“The mission of SMOG-P is to confirm the presence of and map the electrosmog around the Earth, generated by human activity. The satellite's antenna receives signals from a height of 350 km monitoring a circular area with a diameter of 4000 km. Due to the slow speed of the satellite's spin and the anisotropic directionality of the receiving antenna, the measurements needed to be repeated with small time delays and the signal with the largest amplitude was used. We have made nearly 2000 measurements so far,” said the head of the project. 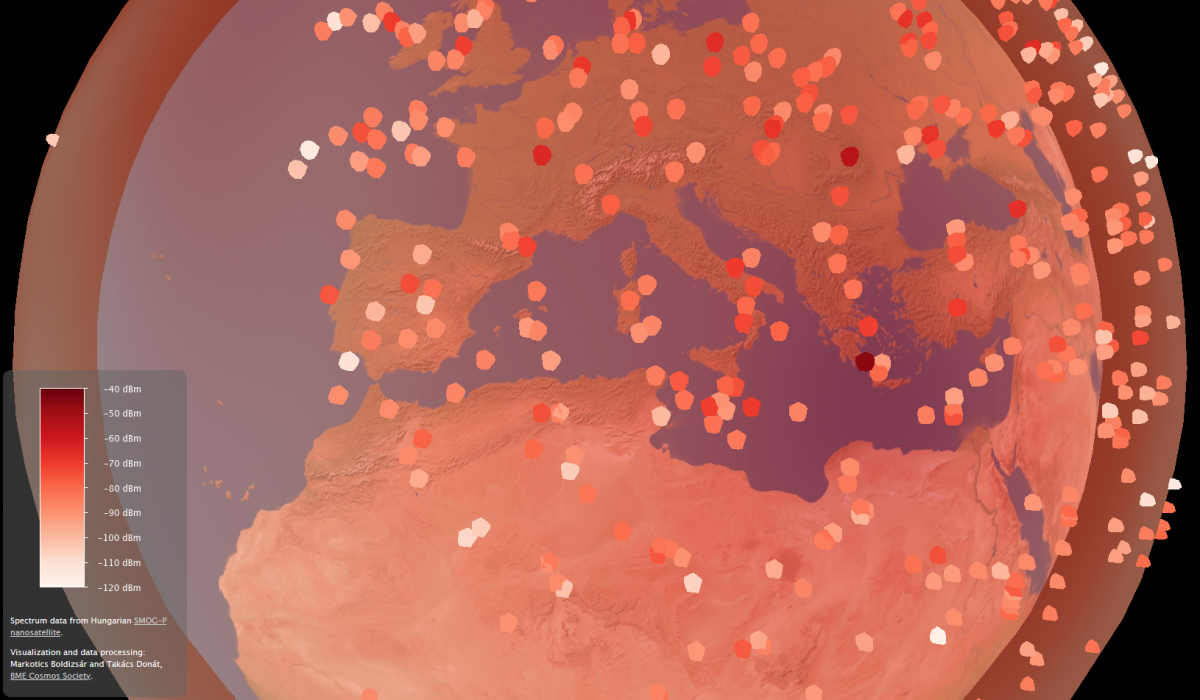 The simplified distribution of the measurement points based on the image of the 3D video version. Created by: Boldizsár Markotics and Donát Takács university students (VIK). An online, interactive version of the 3D map is also available.

“The measurement data from SMOG-P also enabled us to create a map of the electrosmog covering the Earth. There are no signals captured from the satellite over the oceans as there are no signal sources there,” said András Gschwindt. 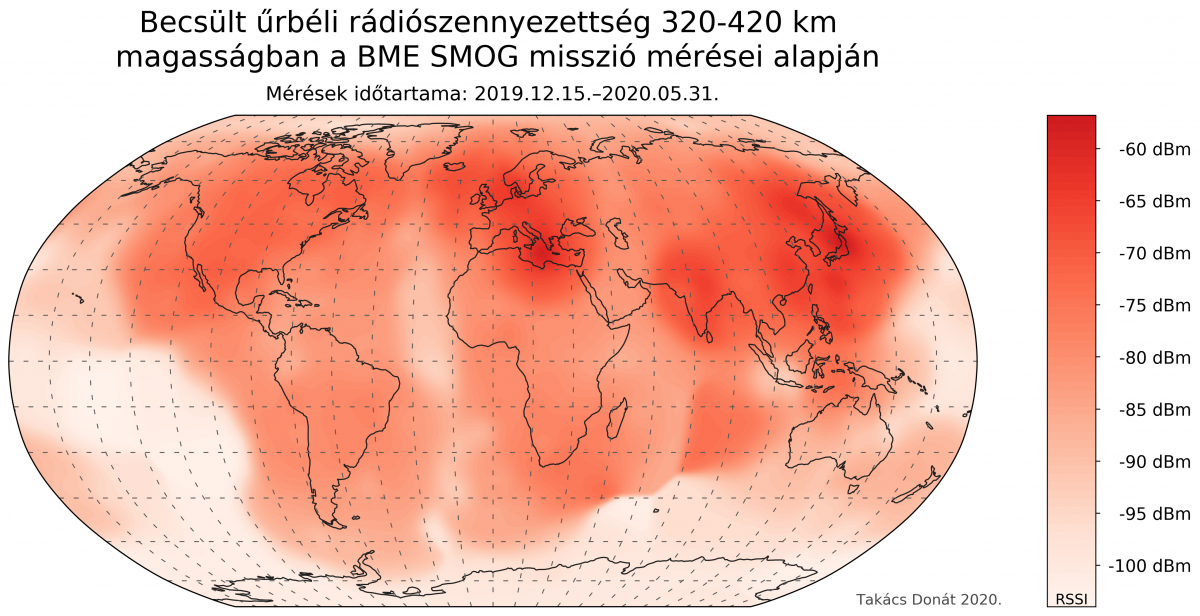 BME's developers interacted closely with experts from the National Media and Infocommunications Authority (NMHH) during the operation of the satellite and the preliminary analysis of its measurements. “We are using our measurement data to try to convince the working group on Earth observation at the European Space Agency that electrosmog should be defined as a phenomenon adversely affecting the environment although it causes damage to the Earth in a different way. In the meantime, the International Telecommunication Union is looking forward to our results and to potentially using our space measurements in the design of telecommunication systems on the ground,” highlighted the head of the project while also sharing their most surprising conclusions: “looking at the spectral image above Europe, we could not only observe signals of around 810 and 950 MHz released by large TV broadcast towers (500–600 MHz) but also signals that come from mobile systems and are not normally expected to be present in this low range. This means that the antenna systems of mobile service providers do not only release signals in their range but also below that, which suggests excess performance levels. 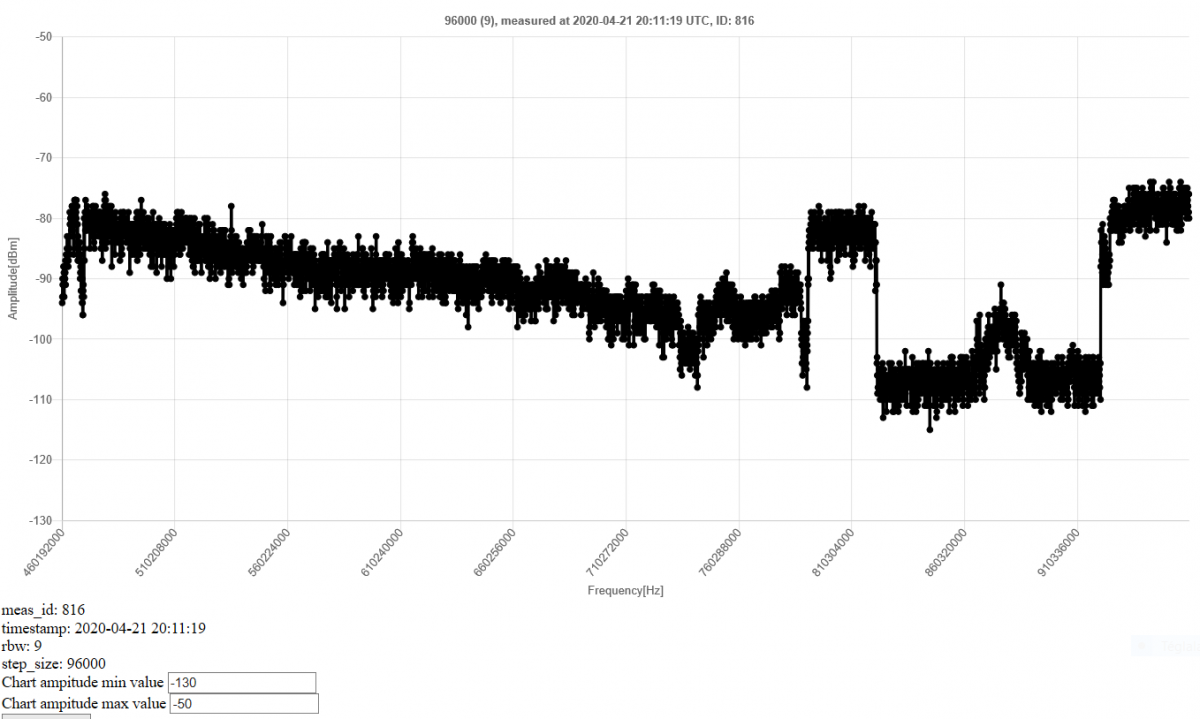 Spectral image above Europe. The section up to 760 MHz is generated by TV broadcast towers while the section above that indicates signals by mobile systems released into space at unexpectedly high levels.

The greatest challenge for the designers of SMOG-P was to ensure the appropriate environmental temperature and power supply/storage for the satellite's devices to function. The two subsystems with the highest level of exposure to change are the primary power supply unit (pcu1) on the inner surface of the satellite's walls and the communication (com) unit in the inner part, which enables radio connections with the ground. The data captured were processed and presented by Donát Takács, mechatronics engineering student at the Faculty of Mechanical Engineering (GPK). 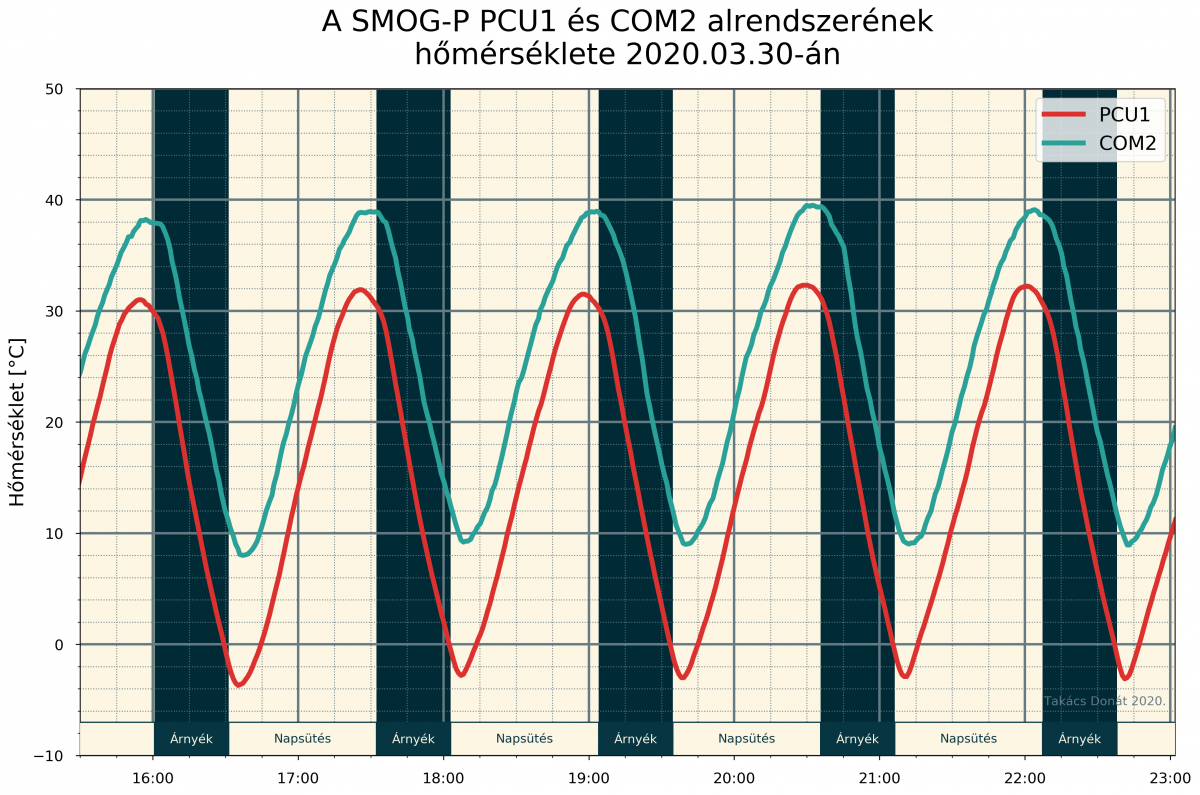 Time-dependent temperature variations in two subunits of SMOG-P: the primary power supply unit (PCU-1), which charges the batteries, and the communication unit for ground radio connections. The temperature rises in direct sunlight and decreases when the satellite is in the shadow of the Earth. The data reflect the impeccable design.

The data were captured, and communication with the satellite was carried out, via the control station located on the top of BME's Building E, under the direction of Levente Dudás, lead constructor and assistant professor at the Department of Broadband Infocommunications and Electromagnetic Theory at VIK and Emil Hödl, station operator. Even the new coronavirus pandemic did not cause any disruptions as the satellite was controlled entirely remotely, from home settings. The data are accessible through the unencrypted frequency range used by amateur radio operators. The decryption software is available on the website of SMOG-1. You can use this software to access the data on your own computer and view the electrosmog present over your location.

Many helpful satellite enthusiasts contributed to the improvement of the software. The central server of BME receives data online from ten countries. Up to now, the largest amount of data has been captured by Tamás Hegedűs (HA6NAB) in Hungary and József Illés (OM3BC) in Slovakia. The key operational parameters of the satellite can be followed on the constantly and automatically updated dashboard managed by Tibor Herman.

András Gschwindt also said that the university environment allows them to involve more and more eager students in the achievement of their project goals. They had a helping hand with this from the BME Kozmosz Kör, a self-organised student group interested in BME's space projects. “We are hopeful that the introduction of the space engineer master programme will further enhance their engagement,” the researcher said sharing his hopes. “Our small satellite SMOG-1, scheduled to be deployed this autumn, is likely to allow us to monitor a wider frequency range including the components of the range below 960 MHz, the band used by the 5G mobile networks, which will support the creation of a more detailed electrosmog map. In the meantime, we will need to upgrade our ground antenna systems and provide backup units. We have received substantial contributions from our sponsors in support of the activities we have carried out up to now using BME's resources and premises. We hope that they will continue to support us,” said András Gschwindt in reference to the future. A large number of research teams at various faculties and departments within the Budapest University of Technology and Economics have been engaged for many decades in space science related activities including basic research, technology developments, the creation of different devices and services as well as numerous forms of education and training.

The BME was at the forefront of the initiative to introduce a master programme for space engineers in Hungary and BME's Senate unanimously endorsed the establishment of an MSc programme for space engineers at the Faculty of Electrical Engineering and Informatics in December 2019. The procedure to establish this programme is already under way with the first term expected to start at BME in the autumn of 2021.