It has got one more year before it burns. Preparations of MASAT-2 have been started

The second birthday of MASAT-1 satellite was celebrated by the „crew” in a professional information day.

„I warmly congratulate the MASAT team on the successful work of the past two years!” announced Gábor Péceli on the birthday celebration organized by the Faculty of Electrical Engineering and Informatics of BME and the Hungarian Astronautical Society.. The Rector of the University of Technology expressed his hope in his speech that “more and more will join the initiative and the topics related to space research will be growing in the future”. 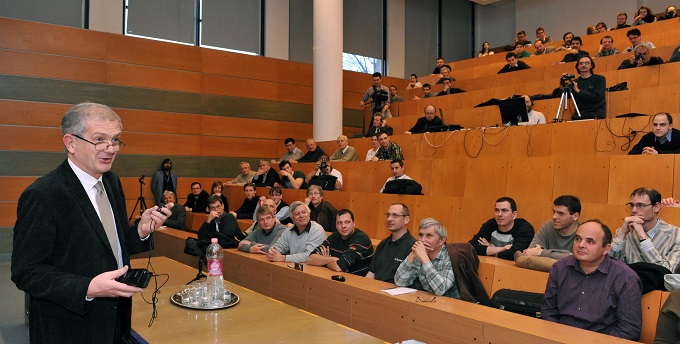 “I am absolutely committed to the plan to have MASAT-2 and MASAT-3 as well,” expressed Zoltán Cséfalvay. The State Secretary for Parliament and Economical Strategy of the Ministry for National Economy, on behalf of the government, welcomed “the first Hungarian small satellite, the success of which proves the high quality of engineering training at the University of Technology and provides a sound basis to continue and expand scientific research, experiments and developing industrial applications in space technology.”

László Vajta, Dean of the Faculty of Electrical Engineering and Informatics of BME launched a competition to develop Earth surface and environment measurement devices and systems to be installed on small satellites (editor’s note: further information on Space Mission 2014 Competition can be found on the website of EIT in Hungarian language). “We are trying to improve direct practical applicability of our research activity and support various potential development areas,” said László Vajta, who is convinced that the new competition will “bring out excellent ideas, attract talented young people and create successful teams that will get involved with space technology and space research.” 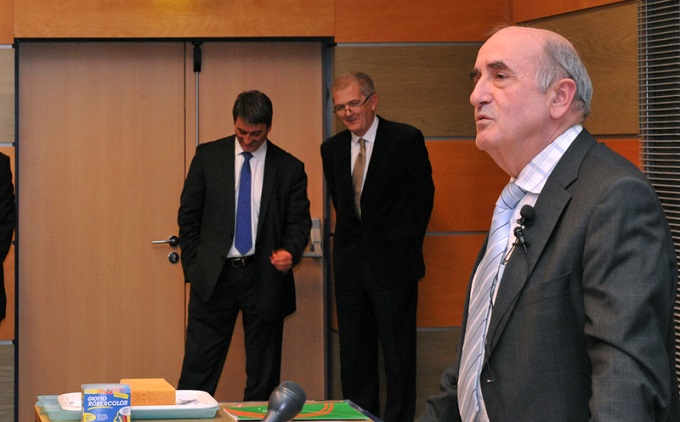 “Launching MASAT-1 two years ago was a historical moment in Hungarian space research,” stated Kálmán Kovács, Director of the United Innovation and Knowledge Centre of BME. László Bacsárdi, Chairman of the celebration and President of the Hungarian Astronautical Society highlighted in his welcome speech that the event was broadcasted live on the internet.

“The first small satellite of Hungary is an internationally renowned successful mission,” emphasized Gyula Horváth, member of the development team, who also said that the satellite circled the Earth 10.500 times in the past two years, took over 200 photos and broadcasted some 22 million information packets to the Earth.

The researcher also highlighted that “for us the biggest success for the future would be to be able to provide opportunities for a growing number of Hungarian scientists and engineers for further research with the new generations of satellites, and also to support the new generations of researchers.” Levente Dudás added that “as a first step the ground control station was moved to a new place.” Another member of the development team mentioned that in the fully automated presentation and education station located in the E building of the university, students of BME and others interested can get insight in the structure, operation and maintenance of the systems of the small satellite. 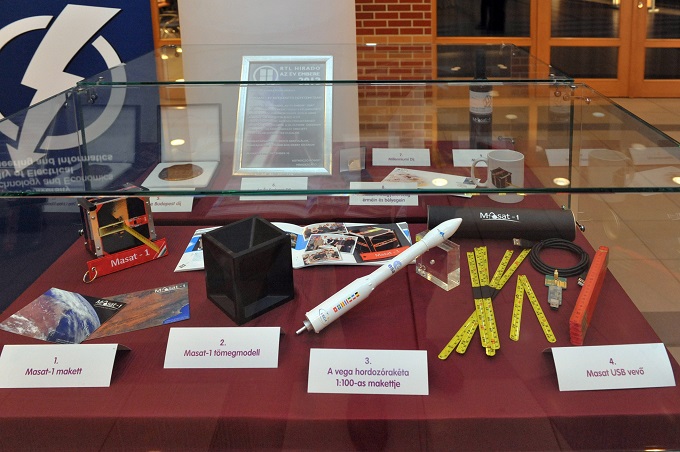 Talking about the future the young engineers announced that preparations for MASAT-2 had been started. In the next generation scientists aim to improve data processing speed, and a more complex camera and a total dose dosimeter will also be installed in order to be able to measure the radiation dose of the satellite. With the help of the latter information lifetime of the next MASAT can be extended. 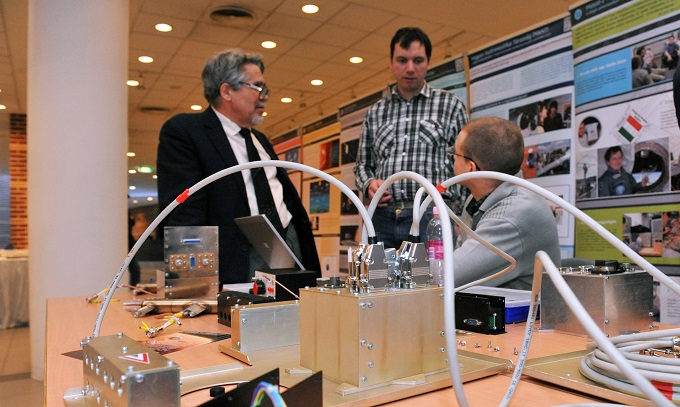 MASAT-1 exhibition in the Hall of I Building

On the celebration of the second birthday of MASAT-1 – after remembering the past events and outlining future plans – participants were informed about space research activities of the students of BME.

Two students of the Faculty of Electrical Engineering and Informatics of BME are members of the Hungarian Space Research Team.   Veronika Grósz   and  Ottó Botond  Lőrinczi in the framewor k of the REXUS/BEXUS Programme of ESA measured atmospheric ion density with rocket and balloon experiments and were  exploring how much the early environment of the Earth was damaged by UV radiation.

“We do not make satellites or launch rockets but we do use them,” announced two students from the Faculty of Civil Engineering of the University. Tamás Tuchband’s presentation described how the geo-spatial positioning of satellite navigation systems can be made more accurate by using the EGNOS (European Geostationary Navigation Overlay Service), a satellite based augmentation system. The signals of GPS systems can be used to estimate the expected amount of rainfall and adjust weather forecasting models. Annamária Kiss, civil engineer shared shocking facts with the audience when summarizing the research and findings of her doctoral thesis: there are continuous warnings that the Antarctic is melting due to global warming, while the measurements of the GRACE, gravimetric satellites’ orbits and the distance between them that is created by the Earth’s gravity proves that the Antarctic is gaining the same amount of ice in the East that it loses in the South. “Therefore we should not worry that the Antarctic would disappear,” confirmed the young researcher.

Gábor Varga, a newly graduated engineer from the Faculty of Architecture participated in a NASA-financed project in New-Mexico. In his thesis he studied an issue of crucial importance in space research: the efficient usage of fuel; his research focused on the precise designation of the orbits of spacecrafts.