Lander of Rosetta orbiter is reaching comet Churyumov–Gerasimenko on Wednesday. The electrical power subsystem of the lander was created by space researchers of BME.

„The success of a lot of people’s work will depend on the time when Philae lander reaches the comet,” emphasized József Szabó, researcher of the Department of Broadband Infocommunications and Electromagnetic Theory of the Faculty of Electrical Engineering and Informatics. „We have been waiting for this very exciting day for 20 years when we will learn whether this equipment 500 million kilometres away works properly.” 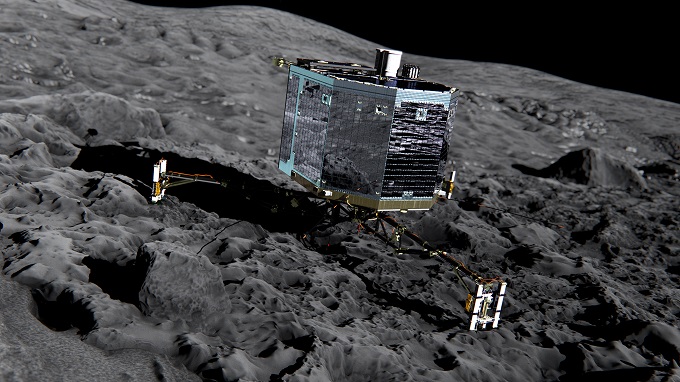 Philea lander is the unit of the Rosetta orbiter which is exploring the surface of comet 67P/Churyumov–Gerasimenko in one of the largest scientific enterprises of the European Space Agency (ESA). Rosetta has been following the comet on its orbit and the lander will be the first measurement unit reaching its surface. (In the name of the comet, besides the names of its discoverers, letter P shows that its orbiting time is less than 200 years and the number indicates that it was the 67th of this type of comet discovered.)

The Rosetta programme was started at the beginning of the 90’s with wide international support and one billion Euro budget originally with the target to explore comet 46P/Wirtanen. Owing to the problems of the booster launching planned for the beginning of the 2000’s was delayed, the plans were revised and the new target was the 67/P Churyumov-Gerasimenko comet. The control centre is located in Darmstadt and most of the scientific research performed by or related to the orbiter is coordinated by German scientists.

Hungarian researchers have been participating in the project since 1994. „ESA experts were in time pressure therefore they were to involve scientists from other institutions for specific work units,” said László Csurgai-Horváth, leader of the Space Research Group of BME. „It was partly a question of luck that research centres of Hungary, which had excellent references but was not a member of ESA, were also involved in this extraordinary task.” 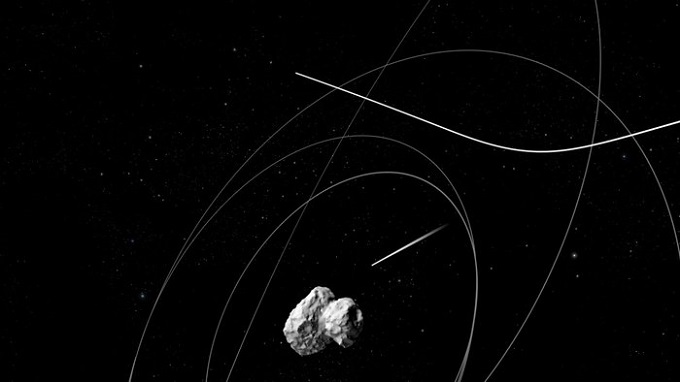 Rosetta orbiter weighs approximately 3 tons, the total surface of its solar panels is 64 m² and it is holding 12 distant measurement units. The Philae lander weighs approximately 100 kgs and hosts eleven experiments, which aim at further exploration of the comet. Rosetta was launched in 2004 and on its complicated orbit – using the Earth’s inertia force three times, Mars’s one time – approached its destination in January 2014 and has been flying with it since then. Most of its route it has spent passively in hibernated state but when it approached the Lutetia and Steins asteroids it was woken up to take photos of them. 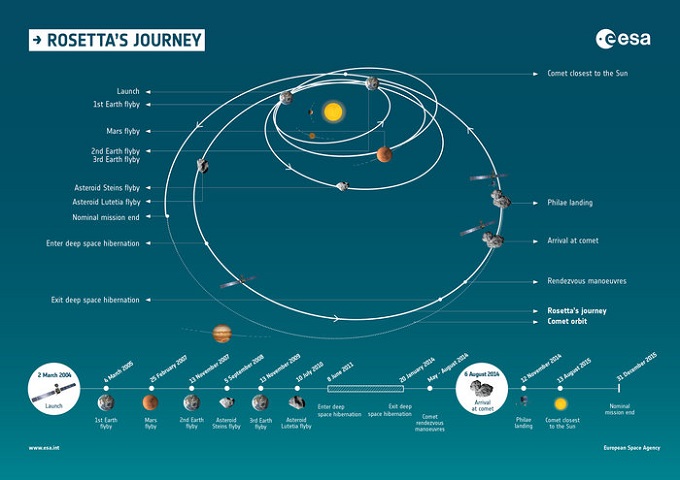 The two main elements of the Rosetta programme are to carry out scientific experiments and observations and to prepare and maintain equipment and supply systems that ensure faultless operation of the orbiter. Hungarian researchers, mainly scientists of the Wigner Research Centre for Physics and Research Centre for Energy Science of the Hungarian Academy of Sciences, SGF Ltd and the Department of Broadband Infocommunications and Electromagnetic Theory of BME were dealing with both areas but their major task was to create equipment and supply systems of the Philae lander of the space probe. BME researchers mainly worked on the ’vegetative organ’, the energy supply unit of the lander. „It is a mechanism of key importance; until it turns on, no other systems would work,” highlighted László Csurgai-Horváth. „It manages all the energy, the batteries and solar panels. It serves the operation of the whole orbiter, therefore the commission to prepare the energy supply unit shows deep trust from decision makers of ESA in our expertise.”

”What I teach to my students is that a spacecraft is like a human being: it exists, thinks, communicates and it is oriented: it proceeds straight to its destination, it does not wonder around,” said József Szabó, who has been participating in the programme from the beginnings. „The main systems of the space probe – the computer, communication and energy systems – work like human beings’ organs.”

Philae, just like Rosetta, spends most of his journey in passive state and needs to be woken up to land on the comet. After that the systems measure the temperature and charging of the batteries. As parts of the equipment operate optimally between minus 45 and plus 70 Celsius it is essential to ensure the required temperature. Batteries mainly need to be protected from extreme cold because otherwise switching them can lead to catastrophic results. When the energy supply system finds everything in order it starts waking up the other units of the system in due order. The Philae lander approaching the nucleus of the comet will anchor itself to the solid surface which is necessary to avoid bouncing back, which is possible due to weak gravitation force. „The process has to go automatically because instructions from the Earth take 24 minutes to reach the orbiter, which allows only limited intervention,” added the researcher. „When Rosetta has launched Philea on the comet it can rely on only itself.” 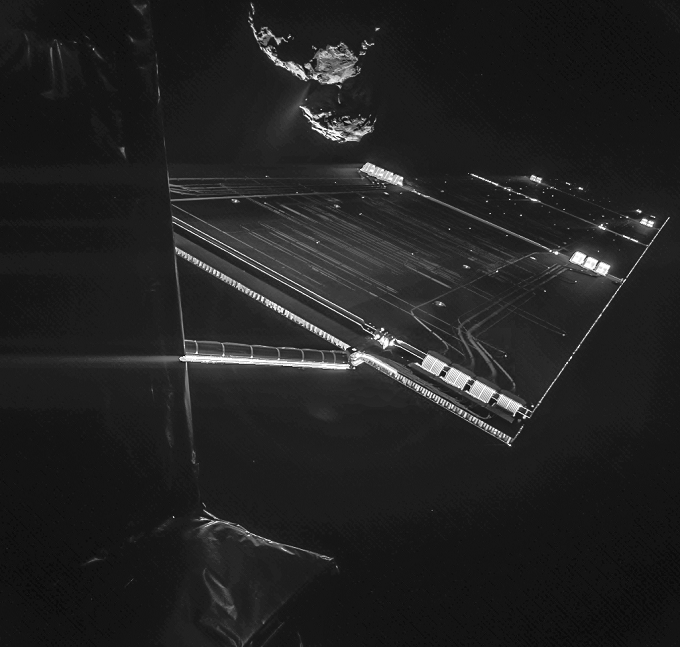 After the start of the orbiter in 2004 developing work of BME scientists has mostly finished. It is not possible to interfere with the operation of the energy supply unit, it does not have any parts that could be programmed remotely. Other hand some elements of the orbiter were improved during the long journey: programme of the computer of Philea was developed for years by a scientist of KFKI and the final version was uploaded this April. The computer can manage the other units in various ways, for example it may switch them on in an alternative sequence; this is how operation of the energy supply unit can be influenced indirectly. During the long journey researchers have found new, energy-saving operation methods as well. For this work close cooperation of developers of the different units was essential, who tested their ideas on the copy of the space probe on the Earth.

„Preparing spaceships is always a risky enterprise: normally all of them are built in one copy and it has to work well,” said László Csurgai-Horváth. „When a computer is fabricated in hundreds of thousands of copies producers continually issue updated and improved software and hardware. In space research it works differently: first we prepare a so-called plain model, then one or two so-called qualification models, which has the same electric parameters as the final version sent to space. Finally the last version is prepared to be sent to space using parts with space qualification.”

All the parts to be used for spacecrafts have to meet extreme quality requirements, therefore they may costs a thousand times as much as similar tools used in industry. For certain equipment radiation-resistant parts are needed, which are otherwise used in military rockets, medical tools or power stations. „Authorities strictly register these parts, some of them are not even allowed to leave the country to avoid any illegal usage of them,” emphasized István Rieger, scientist of the Space Research Group of BME. „In spite of using such expensive equipment such projects are very convenient for university research centres; this is why it is worth joining international projects for space research.”

Such opportunities will be more apparent when Hungary joins the European Space Agency in the near future. Space Research Group of BME  has received several other commissions from ESA besides the Rosetta mission being an associate member of the organization since 2003. Hungarian scientists have great hopes with regards to upcoming membership as the annual membership fee may be regained to improve Hungarian space research. „Until we become members we do not have the opportunity to join most of the application programmes therefore we are unable to join several research and development programmes either,” added László Csurgai-Horváth. „We are highly inspired: the Rosetta programme is a huge scientific enterprise and our participation is an important reference not only for the country’s membership in ESA but to other possible commissions in the future.”

(Editor’s note: on 12 November Rosetta Day is held in the Planetarium of Budapest with presentations of the mission.)