University of Technology in the Forefront of International Water Management

The Department of Hydraulic and Water Resources Engineering of BME received the award of the American Water Resources Association for its outstanding educational and research activities.

At the annual conference of the American Water Resources Association various awards were given recognizing outstanding achievements in the water resources profession in 2014. The „Sandor C. Csallany Institutional Award" of the professional organization celebrating its 50th anniversary last year was awarded to the Department of Hydraulic and Water Resources of the Budapest University of Technology and Economics; József Szilágyi, university professor represented the Faculty at the event in Washington. 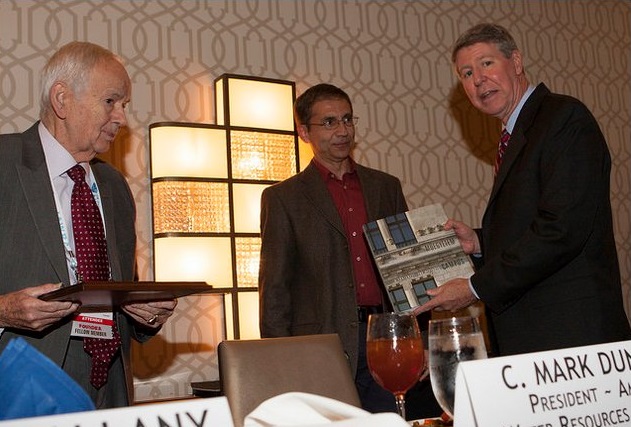 Professor József Szilágyi presents the Campus Album of BME to Mark Dunning, President of AWRA (Professor Sándor Csallány on the left). The Album was placed in the special display collection of the head office of the Association. 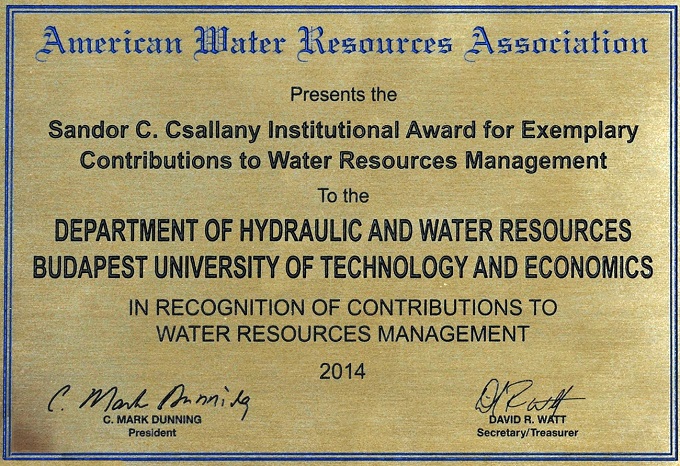 Joint research programmes of water management experts of the USA and Hungary has a history of several decades. Outstanding Hungarian scientists have made efforts to establish cooperation of professionals of the field, some of them had the opportunity to perform research in the American continent. József Szilágyi, representative of BME at the Award ceremony started his American career in New Hampshire. „In 1992 an American-Hungarian joint research programme was started to examine the reasons of subsidence of groundwater levels on the Danube–Tisza interfluve” said the researcher, whose first qualification is a meteorologist. „I had the opportunity to start studying with Charles Vörösmarty at the University of New Hampshire, who was an outstanding expert of global water management.” József Szilágyi graduated as a hydrologist, got his PhD degree at the University of California and worked in the United States for several years. His contacts at the university allowed him to obtain data collected by satellites. „These days such data are available from Hungary as well for no charge, but very few are aware of it,” explained the researcher of the University. „Not only satellite data but other data collected from the surface are also available for free. Unfortunately in Hungary there is a charge for such information, which greatly hinders large-scale geophysical and climate research.” 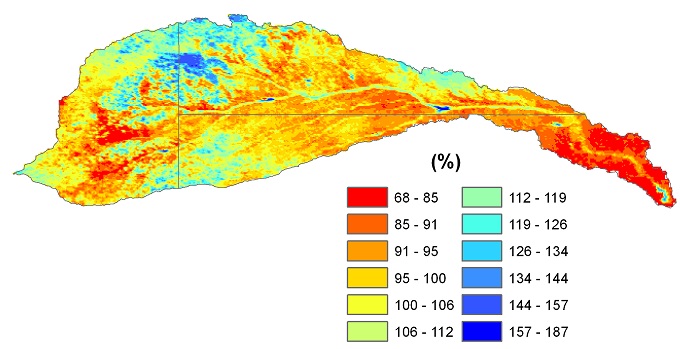 Ratio of evaporation and precipitation on Republicana River (2000-2009)

A special element of the research results of József Szilágyi is that they help deciding an existing and ongoing legal dispute in the United States. Colorado, Nebraska and Kansas states share the water drainage area of Republican River and there has been a long dispute among them about how much water each state can use for irrigation. Although there is an agreement dating back to the 30’s of the last century, which clearly determines how much water the states are allowed to use but the exact quantity of the water taken from the wells is not measured and therefore each state claims that the other states use too much water that results in subsidence of water in the river. „According to the satellite data we are aware of the difference between the evaporation of the natural prairies and artificially irrigated areas. Therefore we can draw conclusions about the extent of irrigation of a given area, we can make estimates how much the three states have influenced natural hydrologic cycle in the drainage basin and which one uses water for irrigation the most intensively,” emphasized the researcher of BME, who published his research results in Periodica Polytechnica among other international scientific journals. 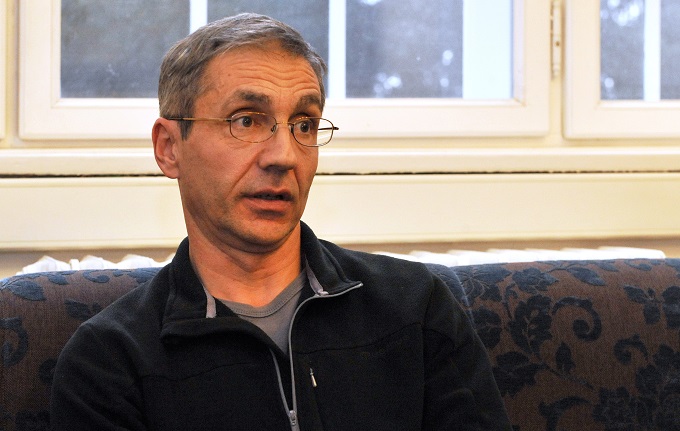 The research is being performed in cooperation with the scientists of the University of Nebraska and the method can be applied in Hungary as well. „We used the same technique to estimate the ratio of evaporation among different areas of the country,” says József Szilágyi. „The method will help to calculate the expected resupply of groundwater as well. In the past 4-5 decades subsidence of groundwater levels in the ridge of the Danube–Tisza interfluve has been a serious problem, which has become slower in the past few years but we do not know the reason for that. The methods used to examine the drainage area of the Republican River were adapted to the local conditions: we used more variable surface temperature data due to the hills and they need to be corrected according to the various height levels so that intensity of evaporation can be measured.” 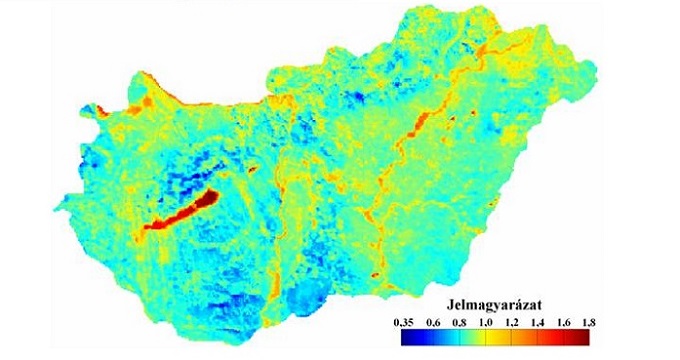 Ratio of evaporation and precipitation in Hungary

The American research project of the professor of the Department of Hydraulic and Water Resources has not been concluded; the MODIS satellite of NASA has been providing publicly available daily data since 2000 and using this information will allow the researchers – including a PhD student and a postdoctoral programme – to extend the time frame to 15 years from 10. These results will provide more grounded conclusions about the interrelations among evaporation, irrigation and groundwater supply.

“Research activities of József Szilágyi have greatly contributed to the fact that we received the AWRA award,” emphasized Professor János Józsa, Vice Dean for Science of the Faculty of Civil Engineering, member of the Hungarian Academy of Sciences. “It is a particular phenomenon that he can progress with his research easier using the freely and publicly available data from the USA than obtaining similar data from Hungary for a local research project.” 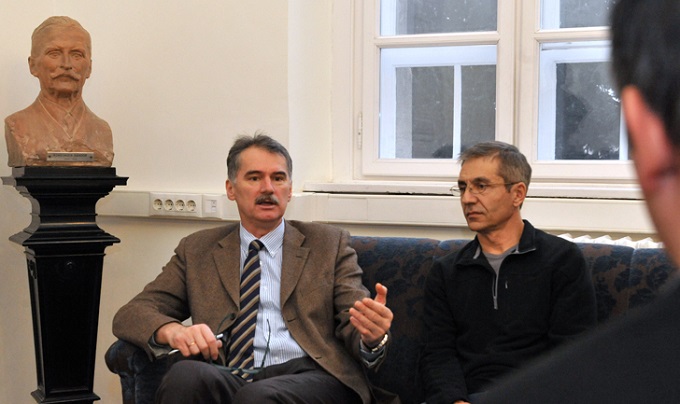 The faculty performs a wide range of scientific activities in the area of water management of Hungary. The floods in June 2013 made a special emphasis on such research; the aim is to determine the significant flood levels on all major rivers of Hungary. The other main area is the national flood risk analysis project in relation to the relevant EU guidelines and the third topic is making the plans for basin management of large water bodies. 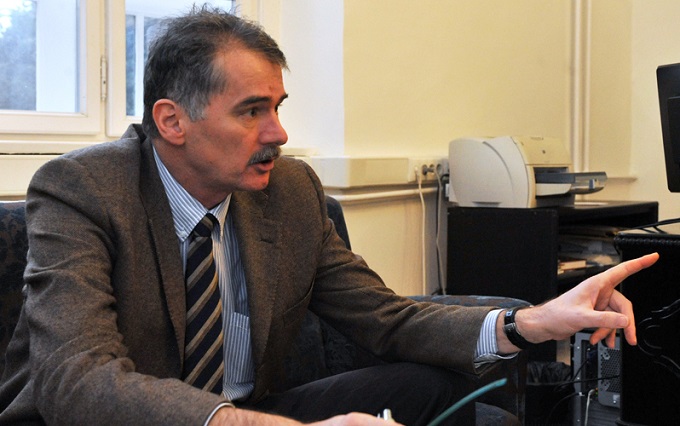 “Some of the projects are fully managed by our Faculty but it is more common that we provide the theoretical and scientific background; for example we prepare the computer modelling of the river flow,” summarized János Józsa. “It is a great challenge for us that for the calculations we have to consider the forestry, environmental and nature protection aspects, while our priority is to organize safe and controlled management of the flood. At present there is no specific research centre for water management, therefore the staff of 40 researchers, professors and PhD students of the Department of Hydraulic and Water Resources and the Department of Sanitary and Environmental Engineering of the Budapest University of Technology and Economics are required to perform all the relevant scientific services and examinations. Recognitions like the recent AWRA award confirm that we do a good job and encourage our staff to proceed with it.” 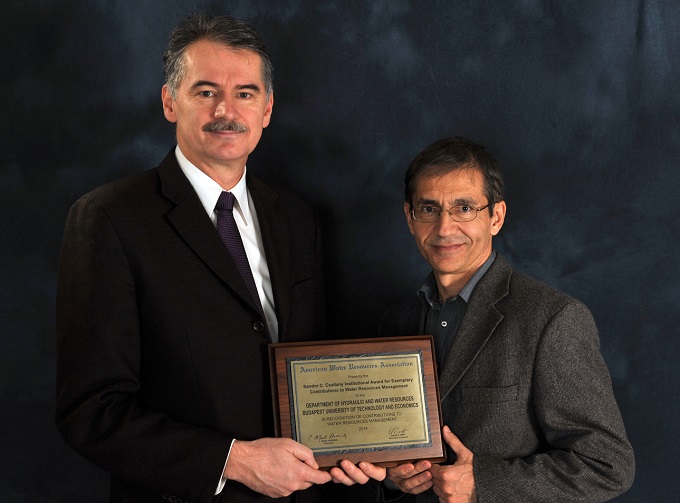