The New Geomerty-Based Calculation Method can be a Breakthrough

Assistant professor of Faculty Of Architecture is the first author of the study published in Nature Communications on pebbles on Mars.

„The article published is a scientific event not only within the field but in general: as far as I know this is the first time that an article about such a topic appeared in this journal,” emphasized Gábor Domokos, one of the co-authors of the article titled Reconstructing the transport history of pebbles on Mars. The Professor of the Department of Mechanics, Materials and Structures is convinced that their findings can bring a breakthrough not only in the examination of natural forms on Mars but also those on the Earth. „Without doubt this is the most spectacular result of the work going on for several years,” he said about the Mars research.

The first author of the article is Tímea Szabó, the 29-year-old assistant professor of the Department of Mechanics, Materials and Structures of BME, the co-authors are Gábor Domokos, Professor John Grotzinger (Caltech), former chief scientist and head of strategic science planning of the NASA Mars Curiosity Mission and Douglas Jerolmack, director of the Geophysics Laboratory of the University of Pennsylvania. 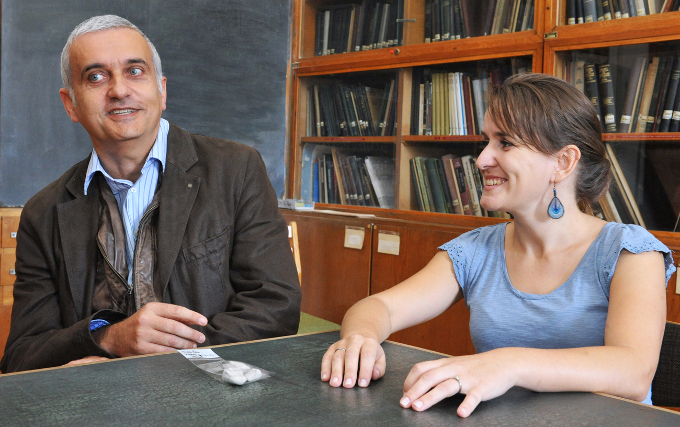 Morphology of the sediment, in other words the shapes of pebbles and grains of sand was a subject of scientific examination already during the antiquity; Aristotle even set up a mathematical model on it. „The reason why scientists are interested is that such forms include their history in a coded format and by breaking such codes we can explore processes on physical surface of the planet,” explained researchers of BME. In spite of the long history of scientific interest and examinations there has been little progress in understanding such forms as describing them is a very challenging mathematical issue: it is not clear what characteristics are significant when describing their evolution, so it is hard to indentify the ’code’. In geology several methods, including geochemistry, are used to describe the origins of sediments.

„In mathematics, the recent presentation of the proof for Poincaré conjecture motivated those purely mathematical research programmes that founded the modern theory of form evolution in the 70’s and 80’s,” explained Gábor Domokos. Scientists found various quantities that characterise the form and therefore presented the past evolution of the form in mathematical modelling. On the other hand as geomorphologists were not familiar with such research findings and they are not directly suitable to describe abrasion processes the mathematical results did not influence geomorphology science for a long time,” added the Professor.

„Invention of Gömböc highlighted the close relationship between the given geometrical form and the characteristic quantities (in case of Gömböc it is the number of balanced positions) and after that we started to examine different models of form evolution,” told Gábor Domokos. „We understood that applying certain results published in relation to proving Poincaré conjecture on mathematical models for abrasion geometry would bring very interesting findings,” added the researcher. In the next step in the research project performed together with Ferenc Kun (Department of Theoretical Physics of the University of Debrecen) he proved that universal rules apply for the geometry of the sediment, the origin of the evolution of pebbles. (Editor’s note: The summary of their article published in Nature Scientific Reports last March is available here).

After several years of fieldwork and research performed in the Morphology Laboratory of BME researchers of the Department of Mechanics, Materials and Structures got in contact with the Curiosity project of NASA. The former chief researcher of the project, John P. Grotzinger and his colleagues helped with collecting photos taken on Mars by the NASA robot, selecting and analysing them to choose the ones that show sediment and pebbles the forms and shapes of which can be for the scientists’ interest. They analysed the data and compared them with field measurements and laboratory results. After all this – by using their knowledge on the geometry of sediments - they have been able to give relatively good estimates for the distance from the origins of the pebbles, i.e. how far water has transported them on the surface of the planet. “We found that the distance of movement of pebbles can be estimated only by their shapes,” they emphasized. In their latest article researchers stated solely on the basis of the geometry-based model that the most likely origin of the pebbles is the edge of the Gale crater located some 30 kilometres away. “Our calculations proved the planetary experts concepts on the origins of the pebbles,” Gábor Domokos emphasized the importance of the findings. 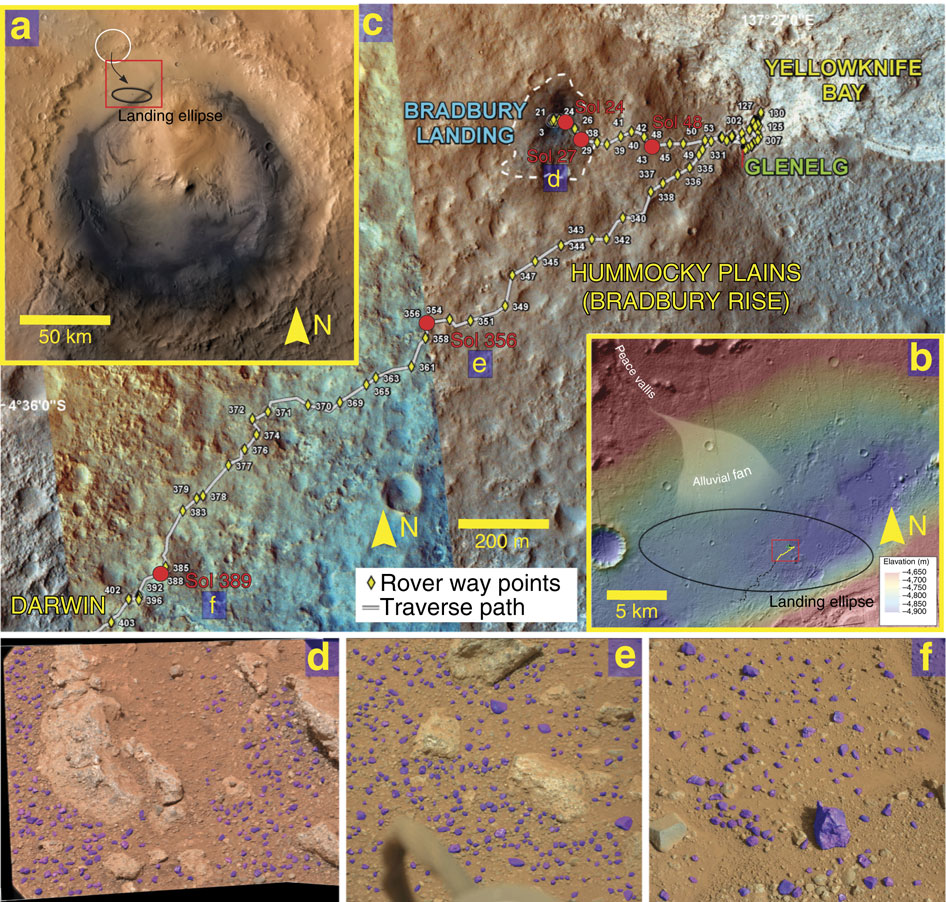 Mars field setting and the traverse of Curiosity

Authors of the article find the publication significant because using the method they can identify the origin and history of a pebble just from the information on its shape. This tool is very useful in situations where there is little data available and possibilities for collecting information are limited. “This method can be a breakthrough in analysing the morphology of sediments,” told Domokos. “We only need some good quality photos of a few hundred pebbles,” added Tímea Szabó. 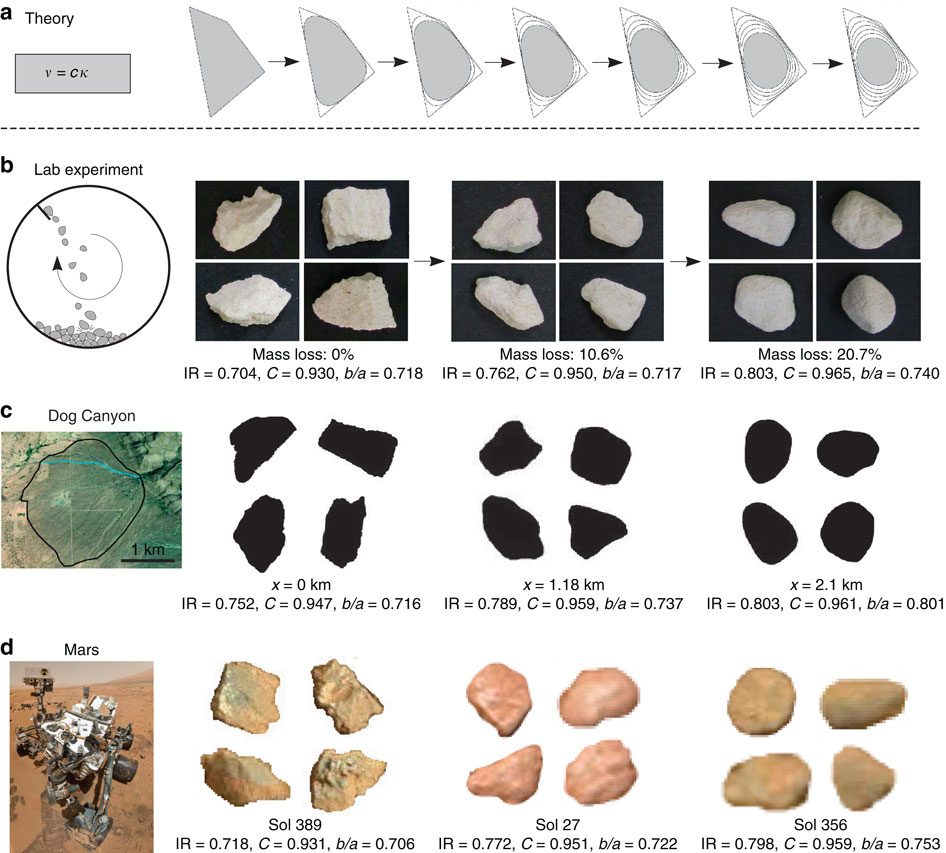 „Our publication is very concise; it contains the synthesis of the past few years’ work and presents the results of field measurements, laboratory experiments and theoretical studies that were published in professional journals for a limited audience. Therefore I mostly appreciate the fact that it has now been published in an interdisciplinary journal and would target a wider audience. This is very motivating for me,” said Tímea Szabó.

The assistant professor finds her personality and area of interest the most determining when choosing a topic for research. “I started working with pebbles in the 2nd year of my university studies when   Gábor Domokos was our lecturer in Mechanics. In a break between two lectures he was talking to me and he invited me to one of his presentations on the mechanics of turtles, which I found very interesting. As a student of architecture I found this geometric approach very appealing and liked the way he was approaching problems. Very soon I found myself at the bank of the Danube collecting pebbles and one student research conference followed the other,” she told about the beginnings. 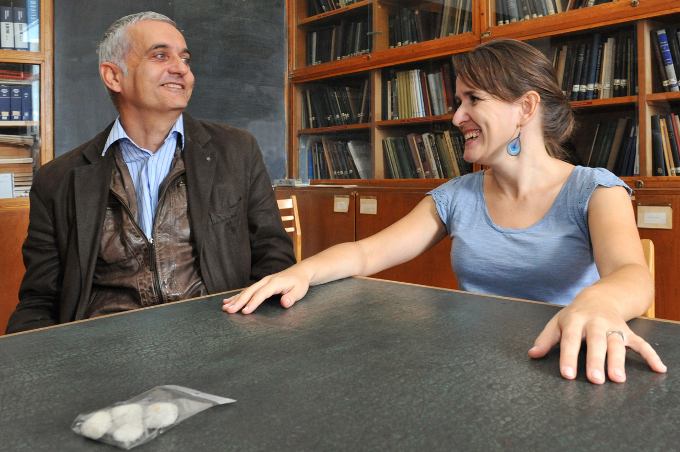 In the next stage of her research Tímea is planning to find out if the method presented in the article would be valid for seaside pebbles or sand transported in the desert. “The theoretical pebble abrasion model used in our project is purely geometrical and not mechanical and therefore it does not necessarily suppose the influence of water and is not limited to the size range of pebbles. The model is based on the fact that particles of similar size continually collide and therefore abrade one another,” explained the young researcher. “We can assume – and our data also confirm it – that in an environment where this condition is fulfilled the shapes of grains change according to the geometrical model applied by us.” The researcher would like to analyze the evolution of the shape of pebbles in friction abrasion as well when the energy of the transporting medium is lower (i.e. a slow river or shallow seaside) and the pebbles do not collide with each other but they roll and slip. “As the described model of collision abrasion is well-founded and tested, we know much less about friction abrasion yet,” she spoke about the tasks for the future.

The young researcher of BME also added that she would also like to do well as a wife as she had her wedding in the summer.