Daniel, the humanoid robot won the hearts in India

The invention of Donat Hegyesi second year student of BME in mechatronic engineering that has already been popular in Hungary was presented in Mumbai.

'The Indian Institute of Technology Bombay invited me to the IIT Techfest conference and fair, which is the largest event in the field of technology in Asia. As a result of a long correspondence I could manage my travel.' – told Donát Hegyesi second year student in mechatronic engineering to bme.hu, who could introduce his design Daniel, the humanoid robot to the audience in India recently. 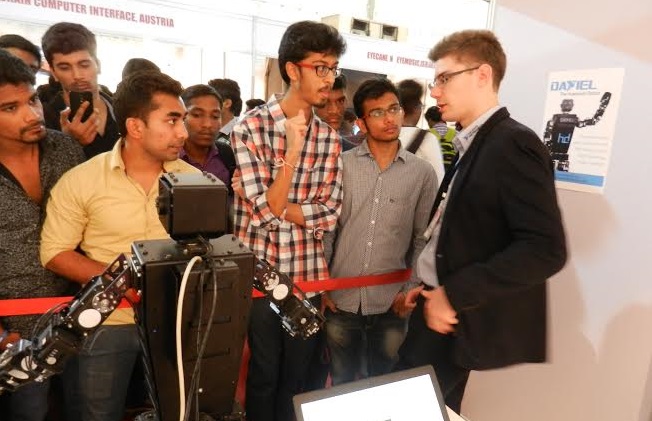 Donát, as a grammar school student, with the prototype of his poker playing robot won the first prize in the Talents Show of the Hungarian Innovation Alliance. With its upgraded version he won the Special Donated Prize By The EPO And Eiroforum at the 25th European Union Contest for Young Scientists. To top them he won the second prize of the largest international scientific contest in the US. At the IIT Techfest he introduced his poker playing robot, but the real breaktrrough  was Daniel.

'They may have heard of me due to my earlier international shows.' – he emphasized. 'I am grateful to National Instruments Hungary for sponsoring the robot and helped me in travelling. My costs in India were covered by the organizers of the event.'

The student travelled to the continent sized country with mixed feelings. 'I was afraid of being embarrassed as I am not familiar with the Indian culture.' – he remembered. 'It was a surprise that the university environment is very similar to that of in Europe. The visitors of the festival were interested in technology.: university professors came with their family members who felt at home in the world of science. Many six-years-old children spoke English fluently, asking about the programming language of the robot, which was quite unusual. From the discussions it became clear that they learn extremely lot and they can write programs at ten. Maybe, they are the children with the best family background. People were helpful as well at the festival, as in the street. There were shocking impressions for a European visitor, like the manifestation of the enormous social differences, the sight of street children – because I met not only programming children.'

At the ITT Techfest there were nearly twenty robot developing exhibitors from Europe, Asia and America: they brought quadcopters, football player robots, chess player machines or robot fish. Three of them were there with own made humanoid robots. 'Some of them have not reached the developing level of mine, but they had already their own company and product.' – described the student. 'The visit was useful to make contacts and the discussions after the event were also informative.' 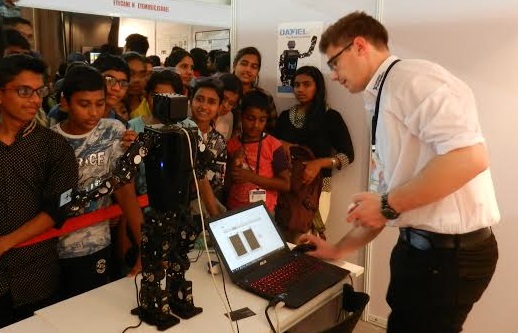 Donát Hegyesi began the development of Daniel, the humanoid robot one and half years ago, that is when he started the university. Desing in paper and in computer took nearly a year. Speciality of the construction that all components are of his design that needed long and thorough work. In the last half year he worked on electronic design and programming. 'My goal is that Daniel would be able to complete complex tasks, so, if I say him to go to the kitchen to make a tee and to bring it into the room, Daniel could interpret and complete it. Minor functions have already programmed, so it can play ball, wave, shake hands, react to the presence of a human. Now I work on the development of his moves, to make him able to walk more smoothly and more dynamically. Later on I would develop Daniels sensors to make him catch the environment in 3D and get oriented in it.' 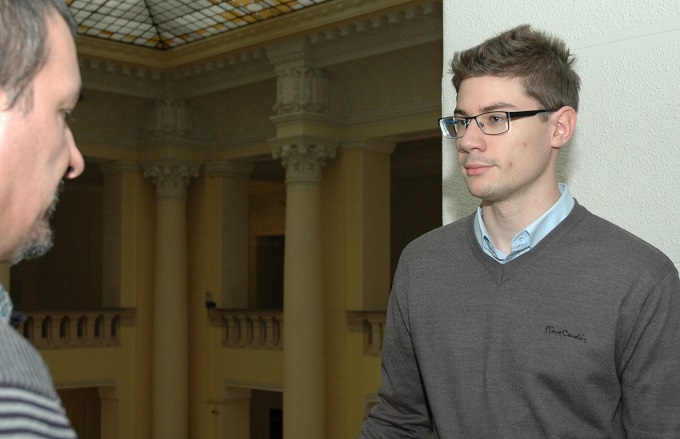 The world of humanoid robots bears contradictions: the world in TV and in sci-fi movies is much over the reality: robots can perform any task. 'Last year the largest humanoid robot contest was in the US. In the videos of that event the robots bump and fell, so the technology is still far from the imagination of the lay people. Anyhow, there are much space for development, and it seems realistic that in fifty years robots will be used widely as assisting machines.' – said Donát. 'It is an attractive field of development, because I would add something new to this knowledge. First of all I want to complete my BSc in mechatronic engineering and it is a challenge. I don't have exact plans for the future, but I want work in a creative developing job.'