“This meeting is not the start of the knowledge sharing between the Visegrád 4 and South Korea, since the parties have been cooperating for several years to present and disseminate good practices and useful examples for innovation between the higher education and the industry”, stressed Mária Vass-Salazar, Head of the Department for Science Diplomacy of the Ministry of Foreign Affairs and Trade at the event initiated by Hungary’s V4 Presidency for the representatives of the project participant countries and held at BME’s Industry 4.0 Technology Centre. She added: the European partners are fortunate to be able to learn from a nation which is playing a leading role in this field. 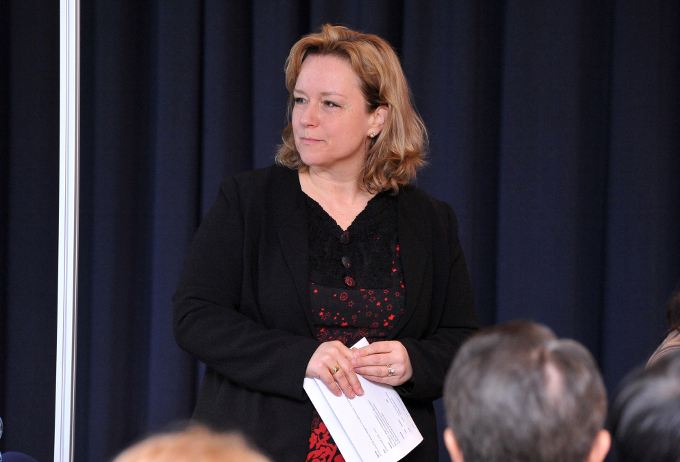 “Our mission is shaped by the objectives of the government, industry and higher education”, emphasised Sungchul Chung, principal investigator of the knowledge sharing programme. He stressed that the partners had similar views on many of the innovative plans for industrial and technological development. He acknowledged the opportunities provided by the joint project-based scientific activities. Highlighting the event’s importance he added: as a result of the extensive cooperation with the V4 countries, all parties involved have the opportunity to learn from the others. 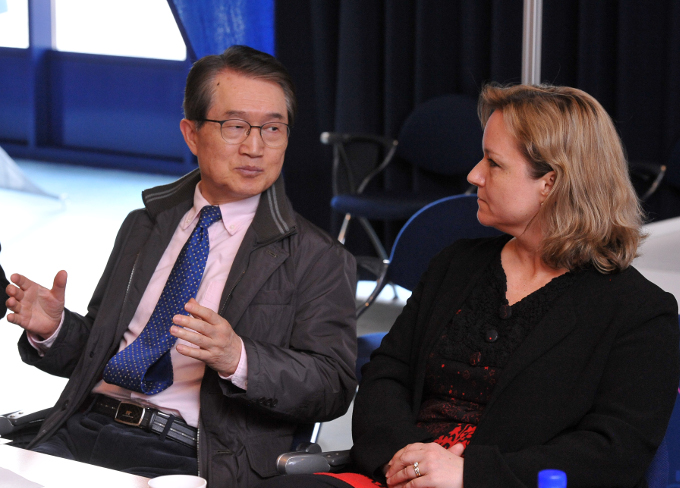 János Levendovszky, professor of BME’s Faculty of Electrical Engineering and Informatics presented the brief summary of the university’s history, as well as its diverse academic programmes and research activities. He said that Budapest University of Technology and Economics was committed to further intensifying international relations, within that its English-language Bachelor, Master and PhD programmes. The professor shared his own story when talking about the importance of gaining experiences abroad, since as a visiting professor at Kyungpook National University he was involved in fruitful scientific work. 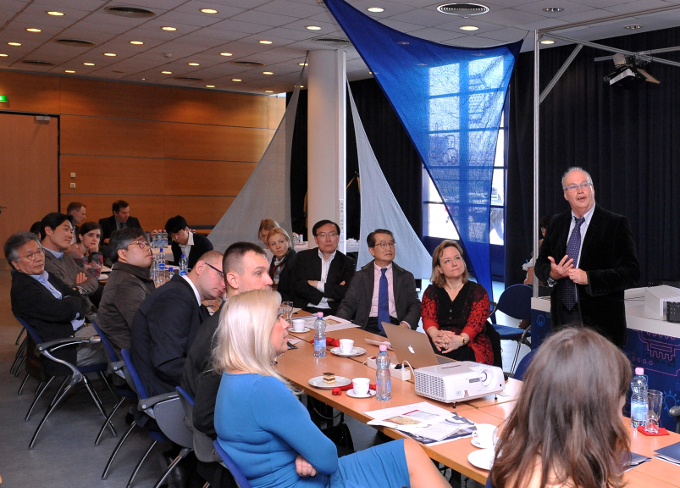 The head of the Scientific Committee of BME’s Senate mentioned such strategically important and spectacular projects as the research on autonomous vehicles and artificial intelligence (AI), conducted at the university.

As the coordinator of several academic and research cooperation programmes with South Korea, Bálint Kiss, Head of the Department of Control Engineering and Information Technology at the Faculty of Electrical Engineering and Informatics, talked about the results achieved so far and future plans. In his presentation he mentioned that as well as in Budapest, workshops on the various topics of the joint projects between the partner universities had been also organised in Warsaw and Daegu in recent years. A crucial element of this cooperation is that BME’s experts are regularly given opportunities to work at South Korean universities as visiting professors, while PhD researchers and experienced scientists from the Far-Eastern country are welcome to visit BME’s laboratories. He added: our university hosted the office of the Hungarian-Korean Technical Cooperation Center Foundation, HKTCCF, set up in 1992 to promote R&D&I cooperation between the universities, research institutes and enterprises of the two countries. 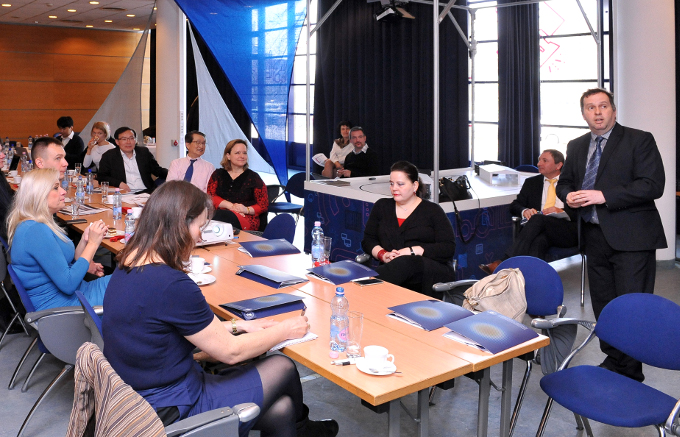 “The student exchange network is one of the most important elements of long-term cooperation between academic institutions”, the researcher stressed, adding that the process is based on bilateral agreements, which specify the eligibility criteria and the mobility numbers. Students typically spend one semester at host universities. Korean students can attend BME’s English-language classes and the Erasmus+ scholarship programme offers them similar opportunities to those of their peers from the EU. As a general tendency, the number of South Korean students arriving here is higher than the number of Hungarians visiting Korea, which is mainly due to financial reasons. 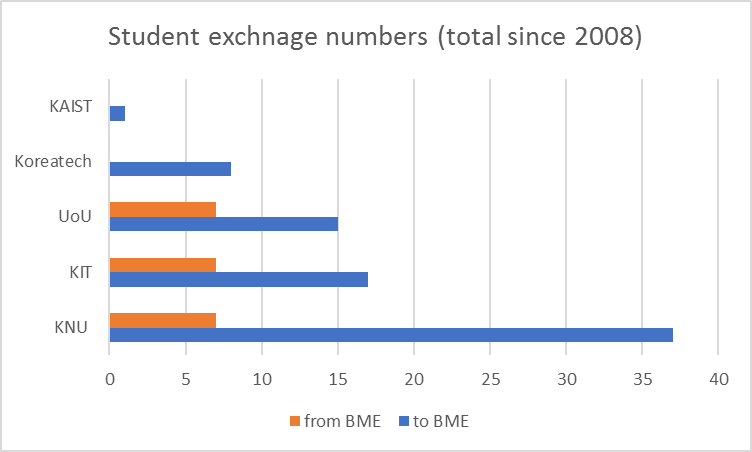 Student exchange numbers from the various partner institutions in South Korea (total, since 2008)

There was an exceptionally successful exchange programme between 2008 and 2012 within the European Korean Leadership Alliance (EUKLA) programme, of which BME was one of the partner institutions. As a result of the cooperation between three Korean and four European universities, which also involved internships at companies, a total of 114 students had the opportunity to gain experience abroad. 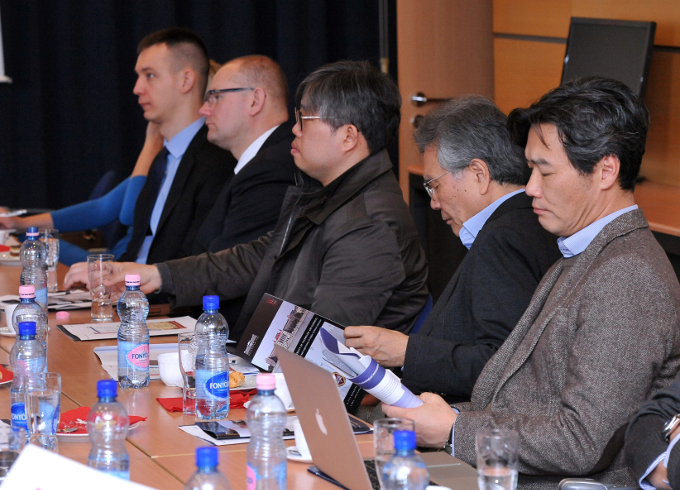 The most successful programme between the European Union and South Korea was KEUDOS (Korea – EU Double Degree Opportunities for Students), which offered double degree programmes in almost twenty specialties. Korea’s Kyungpook National University and Chonnam National University cooperated with BME, as well as Polish, Slovenian and British universities. Participating students had to complete at least two semesters at the partner universities to attain double degree diplomas. Over 200 students received their diplomas and gained knowledge, which was marketable and also useful in a research environment, after studying in one Korean and two European universities.

Bálint Kiss added: the cultural experiences obtained as exchange students are a valuable component of the mobility programmes, which can have a lasting influence on the students’ lives. The organisers paid special attention to introducing the host country’s university, social conditions, cultural values and history to the visiting students. 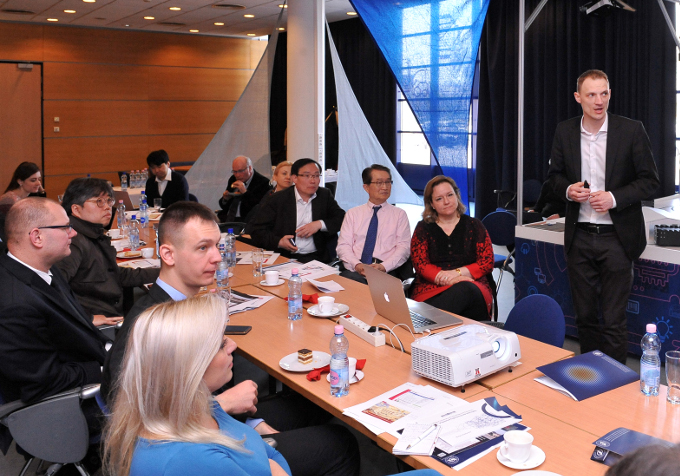 László Lengyel, head of BME’s Centre for University-Industry Cooperation (FIEK) gave a presentation on the activities of his organisational unit. He talked about the aspiration to act like a bridge between the academic and research capital of the university’s faculties and the industry, which accelerates the transfer of scientific achievements to practice and that in return has a positive impact on academic standards. The expert added: the long-term goal is to create a “strong FIEK model”, which can serve as an example for others. 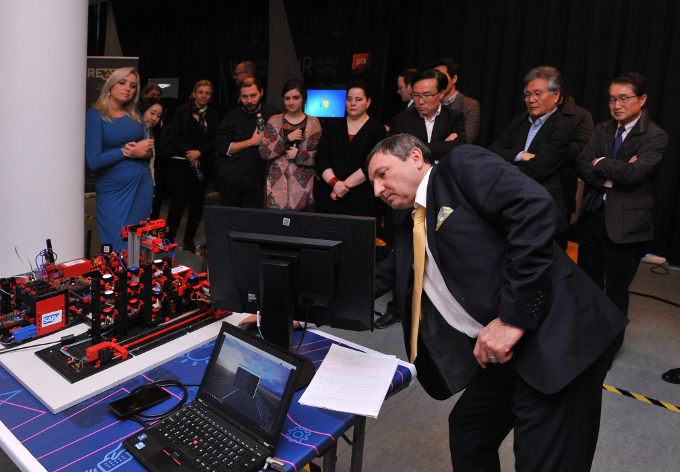 László Kovács, operative manager of the Industry 4.0 Technology Centre outlined the objectives of the scenarios for SMEs involved in production. He emphasised that the fourth industrial revolution is the collective term used for the current period, characterised by the increasing interconnection between information technology and automation, which results in fundamental changes in manufacturing technologies. The opportunities provided by the organisation help those interested – mostly professionals from already existing enterprises – to understand how they can increase efficiency, productivity and competitiveness by using the latest technologies. 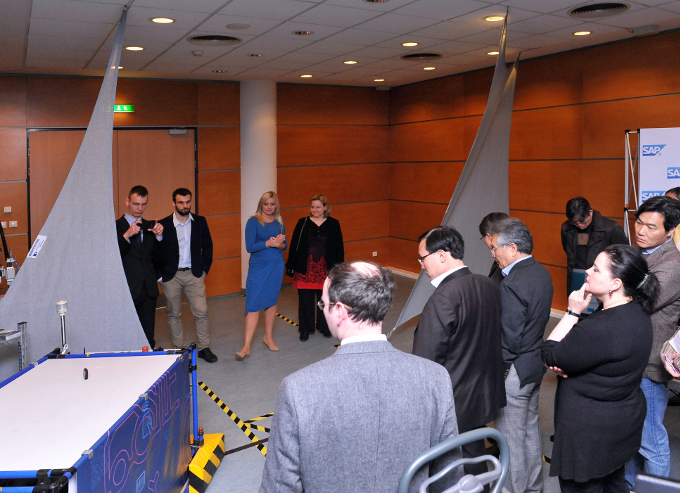 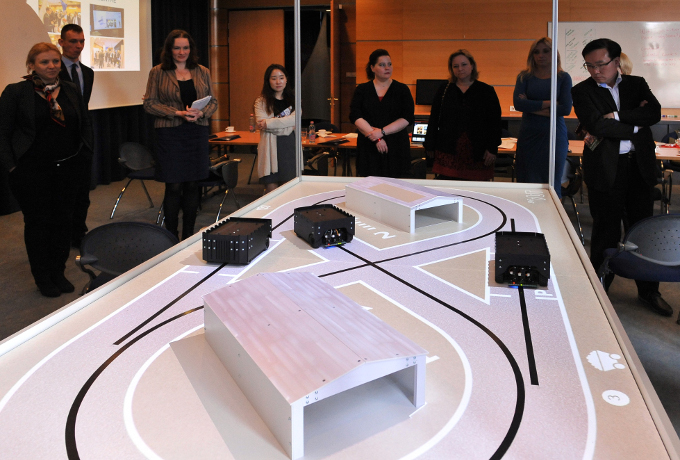 After the presentations the delegates from South Korea and the V4 countries watched demonstrations and participated in a joint workshop.