Well-known and acknowledged Hungarian-born architect from France presents his recent works at BME.

According to architect László Mester de Parajd, whose works are closely associated with Africa: “You can debate the beauty of a building, but the local climate and the available materials must be taken into account during architectural design as important characteristics”. Invited by BME, he gave a lecture for the third time for the attendees of the “crisisARCHITECTURE” course within the subject entitled Departmental Research, at the Department of Industrial and Agricultural Building Design of the Faculty of Architecture. He emphasised that “in traditional architecture most easily accessible materials, such as stones, wood and adobe are used. Now, however, we have different choices to make: it is worth mixing and adapting established forms and traditions with current technical solutions”. (Additional speakers at László Mester de Parajd’s lectures were students Frida Tibai and Laura Veres, who wrote their thesis for the Students' Scientific Association (TDK) in the autumn of 2017 on the architect’s works – Editor’s note.) 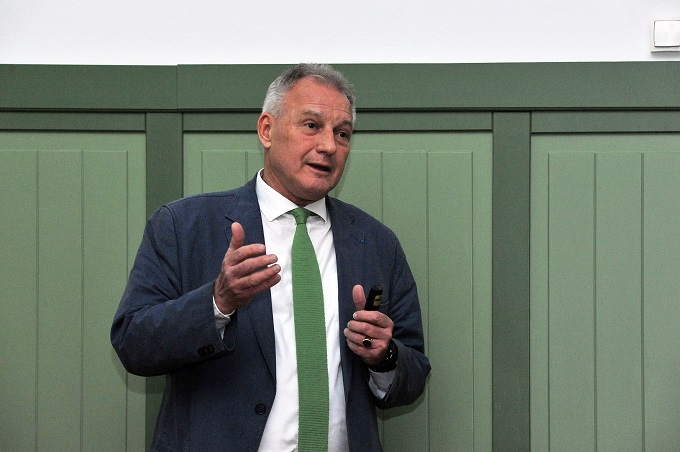 László Mester de Parajd moved to Paris with his parents after 1956, at the age of 8. He studied architecture in Paris, while also working. With the money he earned he travelled as a backpacker through Asia, Africa and the US, always focusing on the unique features of local architecture with the sensitivity of an artist. After graduating he opted for a 2-year assignment in the former French colonies instead of the compulsory military service. As a newly married couple, he and his wife crossed the Sahara by car to travel to his post in Niamey, the capital of Niger. 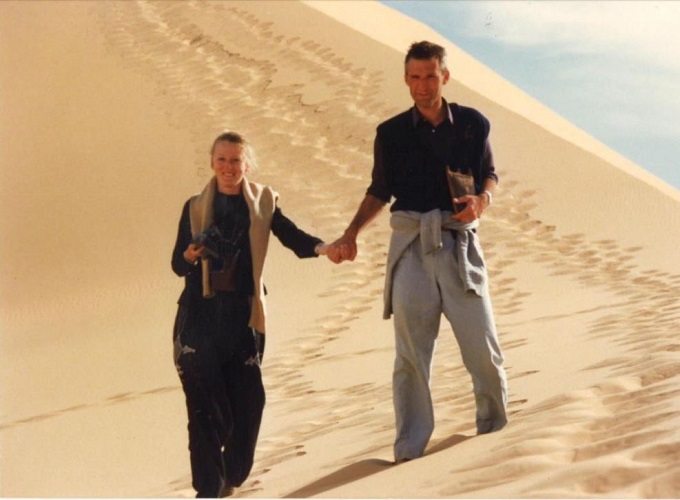 The famous architect eventually spent twelve years in Africa. Commissioned by the Nigerien and French governments, as an architect he has been involved in the design of around forty buildings from 1977. Additionally, he and his wife conducted systematic research on the local architecture: they surveyed, drew and photographed old houses, managing to document some of them just before their demolition. This research gradually helped them to understand the principles of using local building materials and the potential for their contemporary use. They summarised their findings in the book „Regards sur l’habitat traditionnel au Niger” (1988). The famous architect has visited more than ninety countries and worked as an architect in many locations. 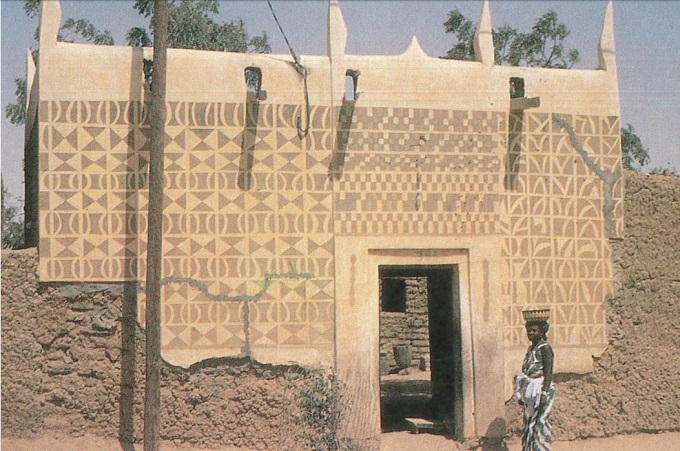 Niger is located in the Sahel. Its desert environment and society prompted the young architect to rethink the applicability of methods that were commonly used in Europe. The diurnal temperature range can be 40-50 ͦC, while usually eight months of drought are followed by a very wet season. Local master builders relied on centuries of experiences, taking into account the orientation, the shading and the carefully planned ventilation systems when building houses. Clay is abundant in the area, making it a popular material for the rich and spectacular architectural culture, so many professionals asked the question: why not use this cheap material?

“Previously I had to explain at great length why I designed my buildings using concrete instead of clay”, László Mester recalled, adding: the cheaper material would be an obvious choice, but it is not practical. In local communities, houses and mosques are repaired and remortared with a combined effort on a yearly basis, because a few centimetres at the top of the adobe buildings are washed away in the rainy season. However, the locals do not consider public buildings or those built by foreign NGOs as their own. “Considering that I designed schools and hospitals, I had to take for granted that the maintenance culture was underdeveloped, due to the communities’ approach which lacked ownership, so I could not use adobe as a building material, although it would have been cheaper and easier to employ the traditional technique. Although 90% of homes are still adobe buildings, we cannot force the locals to continue using it exclusively if they will not carry out the maintenance work; so it was easier to develop a new method instead of changing their mentality”. He also added: a lot of the building techniques, acquired over hundreds of centuries, can be used in modern times: the most beautiful example of this is ONERSOL (Office nigérien de l'énergie solaire, Niger’s Solar Energy Research Centre), built in Niamey, which received several professional awards and on which the Hungarian architect started working in 1979. 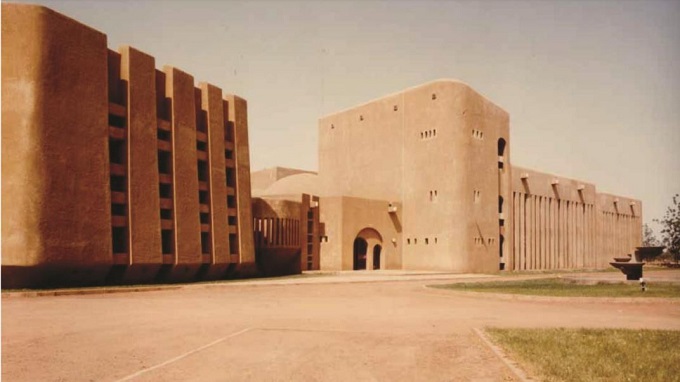 From a distance the monumental block of the research centre resembles the local adobe buildings, such as mosques and buildings of former emperors; the dome being a reference to the latter. In this architectural culture nothing is exactly symmetrical, which is why László Mester also avoided such architectural solutions. “The uneven distance between the pillars of the fence is intentional: when it was being built, I had at least ten people phoning me that the contractor had made a mistake”, the architect said, recalling the humorous moments from the past, continuing: “they probably expected a European architect to come up with a multi-storey glass palace. Some of the locals did not see the point, but with time they came to accept the image.”

Rounded shapes also evoked the local architecture (traditionally edges and angles were not used because they would have been washed away by the rain anyway) and the sand colour was necessary because of the lack of regular maintenance (they found that a white finish would become dirty immediately after the first rainy season). 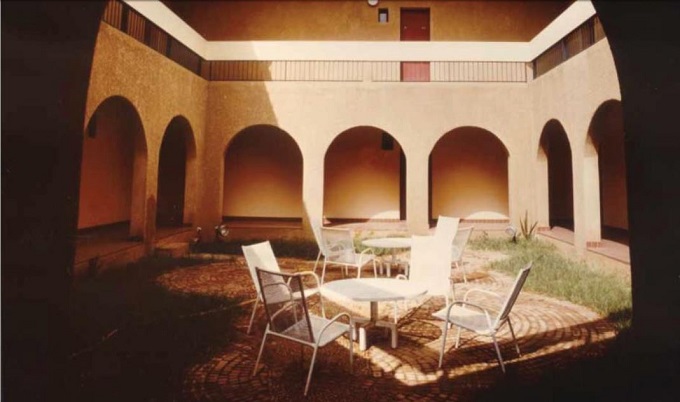 Apart from the aesthetic values, the design also focused on the aspects of comfort and operation. The biggest problem was managing the heat, for which they turned to ancient methods. László Mester designed a special, hollow wall structure with ventilation slits in the lower sections. This generated an air flow which cooled the rooms to some extent. This technique was inspired by the traditional round-shaped silos, which were several metres high: they were built using 4-5 centimetres thick clay, many of them with double walls, so the outer wall protected from the external heat, while the 20-25 cm air gap and the internal space helped to reduce the temperature. 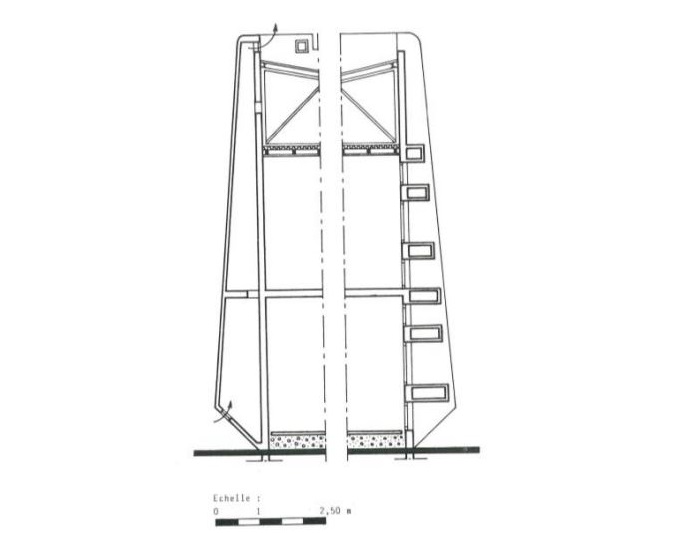 Extreme heat within the building can also be controlled by proper orientation and shading. In the case of traditional buildings, such as mosques, the thickness of the adobe walls reached up to two metres, which not only helped regulate the temperature due to the sheer mass of the walls, but the use of embrasure-like windows prevented the rooms becoming over-heated by the incoming sunshine. Although the Hungarian architect designed concrete walls, he also applied North-South orientation and added deeply seated windows, which, together with the creation of proper ventilation, further reduced the temperature of the rooms. The draught creates an excellent relative temperature sensation, but the dust and sand, carried in the air, made cleaning the interior more difficult.

ONERSOL was well ahead of its time in combining green architectural principles and being built without air-conditioning, which cut operational costs significantly. The benefits of this solution was proven by one of the architect’s later works, the building of the Court of Justice in Niamey. The client insisted on having AC in the main courtroom, but later it turned out that it had been switched on only twice, which rendered its use completely uneconomical.

László Mester and his wife returned from Niger to Paris in 1988 to start a family. He had his own office, where apart from designs, he also worked on architectural projects in Africa, run by the European Union and the French government. He designed and built schools and hospitals in Madagascar, Togo, Mali, Senegal and Mozambique.

The architect is still active today. His expertise is utilised by France’s development agency, the Agence Française de Développement (AFD). He is usually away on work assignments for a few weeks or months at a time. His longest assignment was for two years: in 1994 he designed and oversaw the building work for five refugee camps, coordinated by the UNHCR to provide shelter for the masses of people fleeing to Burundi from the Rwandan crisis. “It was an exciting job, just the one for adrenaline junkies”, he remembered, adding that in ten days they created temporary homes for 25 thousand people.

The Hungarian architect played a pioneering role in the 1970s in Africa: in those times not many attempted to combine local architectural traditions with modern techniques. When opened, ONERSOL was a huge success, featuring in many articles and books, but was then forgotten for a long time before recently being rediscovered. It featured in the „Africa − Big Change Big Chance” exhibition, at the 2014 Milan Triennial, as well as at the Salon d’automne in Paris in the same year, winning the Grand Prize in the architecture category out of 850 exhibits from 42 countries.

“Architectural design in Europe and Africa often overlooks the local characteristics, while in our increasingly standardised world the beauty of original buildings and the expertise, accumulated over many centuries, are values, which we should rely upon”, László Mester said in summary.