"BME, the flagship of engineering education has reached a new port"

Close to ninety students received their diplomas at the end of their studies at BME’s English-language bachelor’s and master’s programmes.

“We are proud to say that BME is the flagship of engineering education and I salute you as its first officer”, said Vice-Rector for Education Károly Veszprémi addressing the audience of young students at the graduation ceremony. He added that finding a berth requires a coordinated approach from people and machinery: for this the officers are the professors and the vehicle is the university's infrastructure. “You were not passengers, you were the crew. You were active participants in this journey which took several years.”, said the professor. He stressed: “the ship has reached the port, but the journey is not over: you can continue your studies individually or with an organised background, hopefully seizing the opportunities offered by the MSc or PhD programmes, and we hope that you will do this here at Budapest University of Technology and Economics”, adding that graduates can rely on the skills acquired here for the rest of their lives. 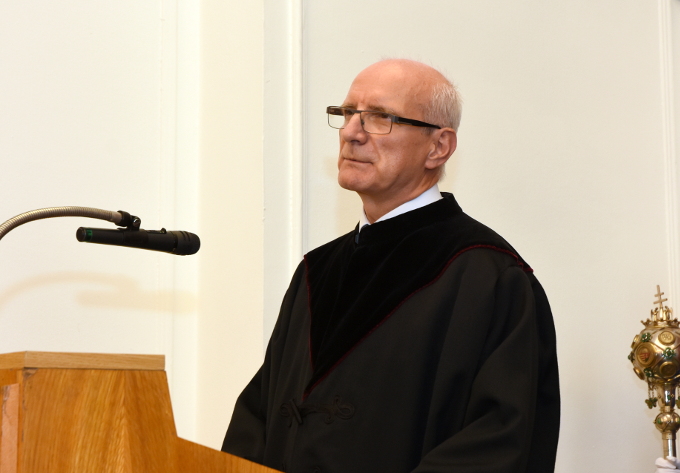 “Among other things, studying abroad is aimed at stepping out of our comfort zone to gain new experiences. I think that you have done a good job in this respect”, emphasised mechanical engineering student Anirudh Bodkhe, when saying goodbye on behalf of the students left behind at BME. “As members of a large international community, we had plenty of opportunities to get to know and learn from each other’s cultures”, he said when assessing the advantages of belonging to a varied student community and asked fellow students to rely on the mentality – hard-working attitude and determination – with which they attained their degrees. 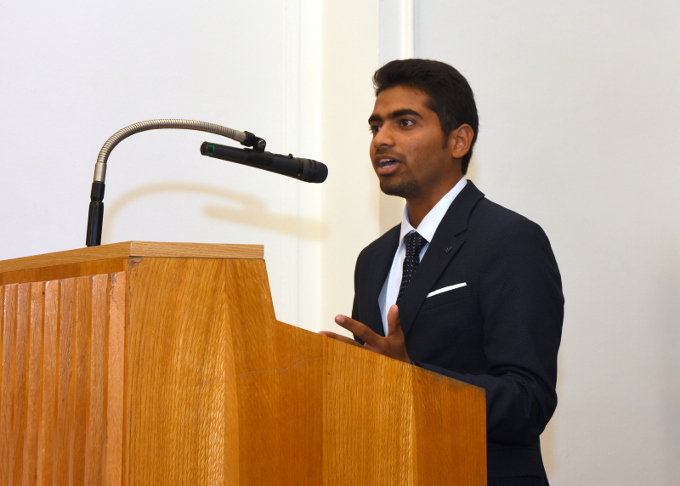 Walaa Ayyad, MSc student of architecture from Palestine was one of the graduates addressing the audience. She recalled that as a refugee and an architect, she arrived at Budapest University of Technology and Economics with an unsure, hesitant and defensive attitude, which affected her abilities as an architect negatively. She emphasised “as engineers, it is our mission to change the world: BME has taught me to explore the real issues, to focus on simplicity and gave me hope. My work slowly became more streamlined and the end result reflected my inner peace. I realised that the knowledge I had gained here was truly precious, because it released positive energies, helping me to set the goal of sharing my experiences with others when I return to my home country”. 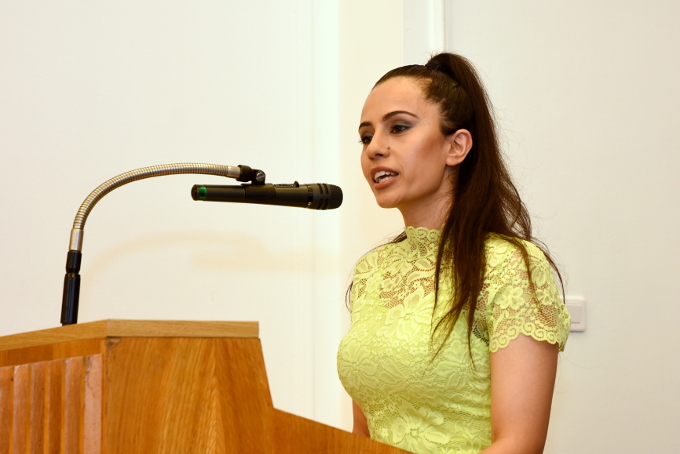 On behalf of the students who received an honourable mention for their academic excellence Davit Sarishvili, BSc graduate in civil engineering from Georgia shared some parting words. “We say in Georgia: ‘studying is bitter in the beginning, but sweet in the end’. I can truly say that BME’s tough curriculum was the most bitter thing that I have ever tasted, but now the sweetness is beyond all my expectations: the knowledge and self-confidence that I acquired while conquering the curriculum is the biggest reward for me”, emphasised the student who participated in the Stipendium Hungaricum scholarship programme, thanking BME for its support and promising to work towards further strengthening the cross-border friendship between the Georgian and Hungarian people. 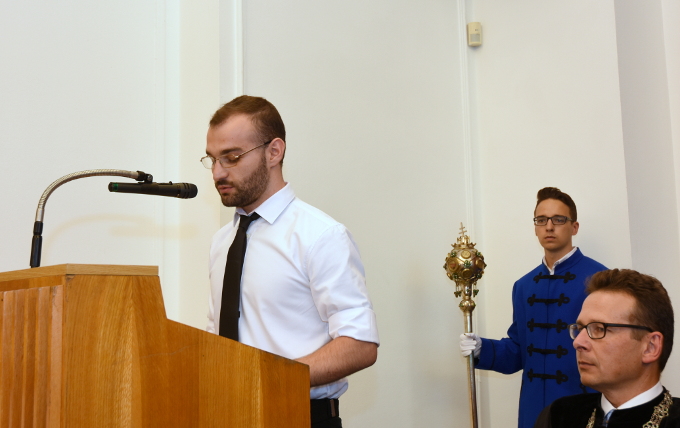 Master of the award ceremony György Ádám Horváth said farewell to the graduates with the words of the world famous English physicist, Stephen Hawking: “Remember to look up at the stars and not down at your feet. Never give up work. Work gives you meaning and purpose and life is empty without it. If you are lucky enough to find love, remember it is there and don't throw it away. 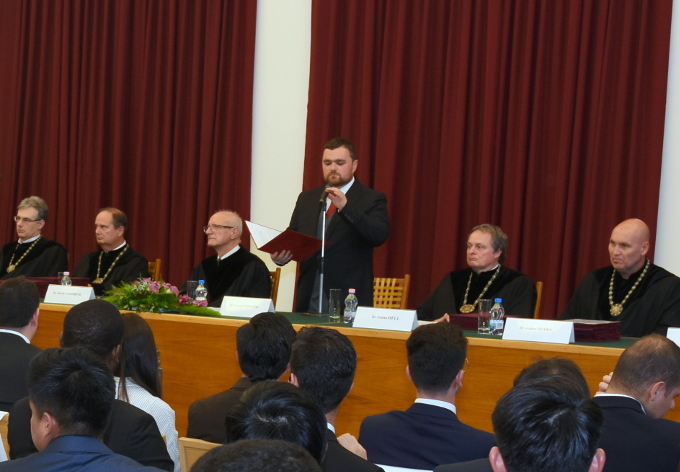 BME’s six departments offering several English-language programmes are regularly attended by students from around 50 countries. 89 students from around 30 countries completed their studies at BME in July 2018, most of them from Turkey, Ecuador, Syria, China, Jordan and Pakistan. A large proportion (34 people) attended programmes at the Faculty of Electrical Engineering and Informatics and each of the other faculties awarded diplomas to a dozen students. Although in this semester there were no new graduates at BME’s Faculty of Natural Sciences and Faculty of Economics and Social Sciences, students took several subjects at these faculties as well. 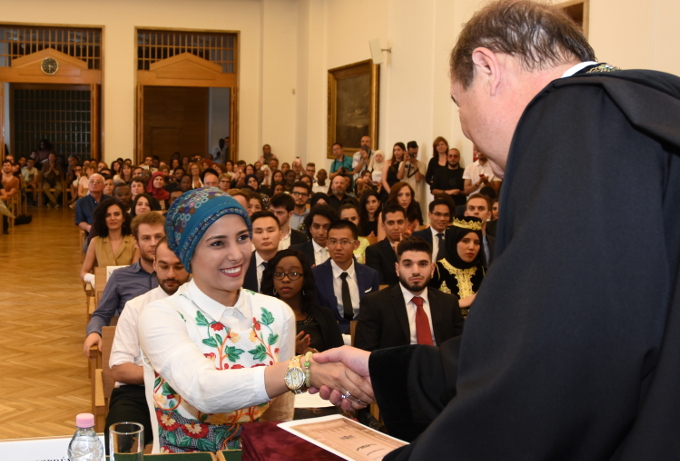 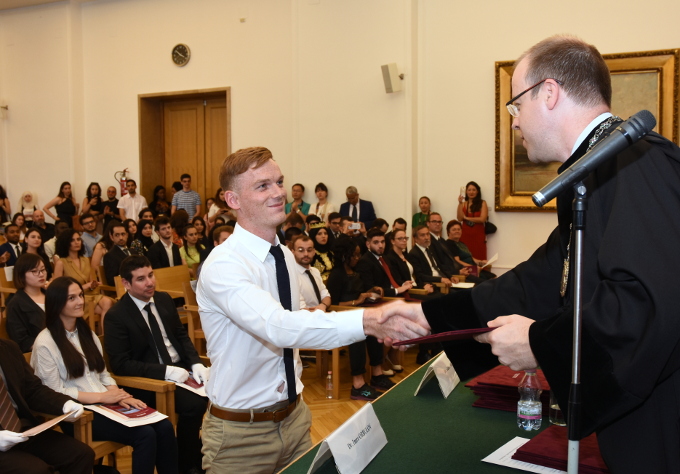 György Farkas, professor of the Department of Structural Engineering at the Faculty of Civil Engineering and coordinator of the French-language programme said in his welcome speech that the long-running programme had been overhauled in recent years. BME is a member of Agence universitaire de la Francophonie, AUF (Association of French-speaking Universities), which coordinated the programme in which students can take 12 subjects in two subsequent semesters of two subsequent years in the French language. If they successfully complete eight subjects in the four semesters, a certificate is issued with their diploma, which was presented to 11 students this time. 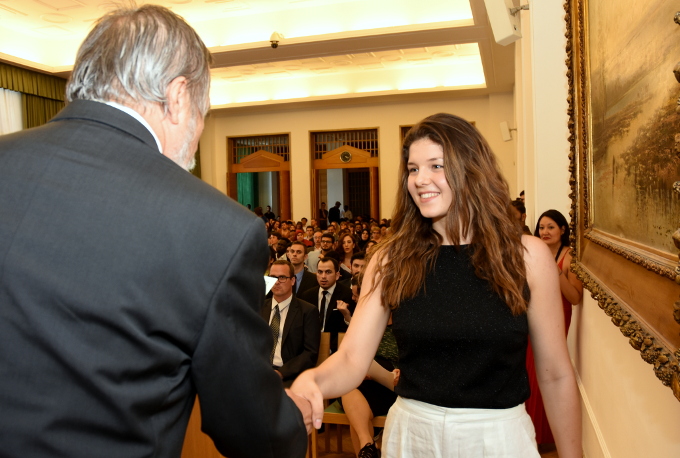 After the official ceremony the new graduates and their guests attended a buffet reception, where they shared their memories of the past few years and received congratulations as new engineers. 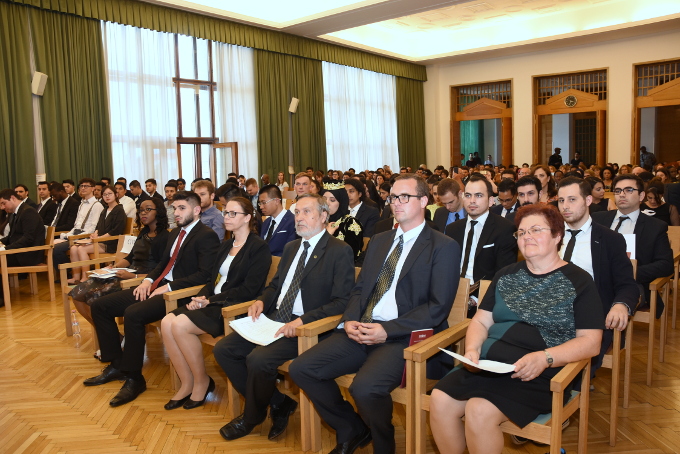