Our engineering students achieved another international success with their innovation

The special reading glove designed by BME’s students for the visually impaired was selected as the second most innovative device at the international finale of this year’s Falling Walls Lab competition.

“We were genuinely surprised that our innovation attracted the attention of the international jury which included world-famous scientists and innovators and in addition to that, was selected as one of the best projects. This recognition only adds to our commitment to development, which is important and necessary for societies,” said Ádám Fülöp, the leader of the GlovEye team, a recent graduate of the master course in computer engineering at BME’s Faculty of Electrical Engineering and Informatics (IVK) and the winner of the second place at the international finale of the Falling Walls Lab 2018 in Berlin, to bme.hu. The students named their special glove, based on the components of the Braille system and designed for blind and visually impaired people GlovEye, which helps users read any printed text. To use GlovEye, you need a smartphone and an application developed by the students. The device’s camera focuses on the text and “interprets” printed text with the help of the application, then sends information to the glove about the text via Bluetooth and finally the user perceives the text with the help of the 6 small spikes built into the glove as if touching Braille characters. (Editor note: BME’s young scientists have presented their innovation in a number of international competitions. In 2017, GlovEye was chosen as one of the 32 best applicants at the final of the Microsoft Imagine Cup in Seattle. After the competition, bme.hu interviewed the developer student team.) 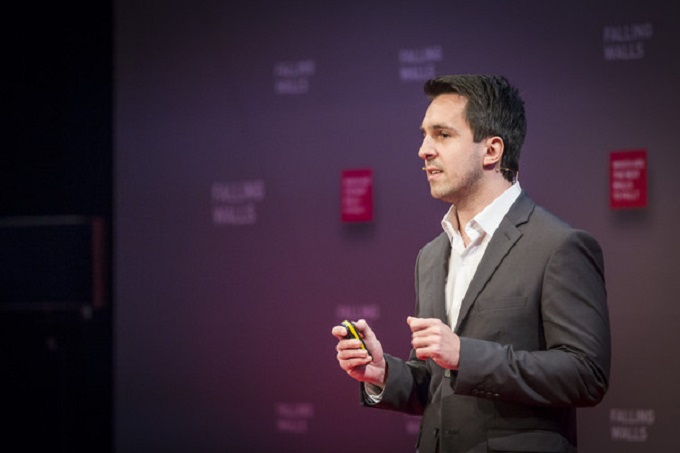 The participation of BME’s young scientists in the Berlin finale was partly due to a lucky chance: the withdrawal of one of the finalists selected at the Hungarian Falling Walls Lab allowed them to be part of the finale where a total of 100 projects from 77 countries was presented to an international jury. 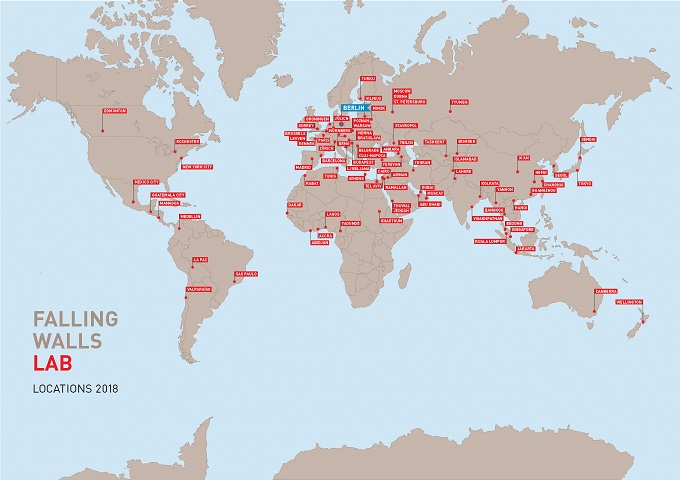 Each competitor was given a maximum of 2 and a half minutes to present followed by 30 seconds to answer the jury’s questions. These pitches require presenters to communicate in a clear and concise manner making the benefits of a project’s results easily understandable even for those who lack competence in a special field. This type of communication is an excellent means to change people’s minds while also posing a great challenge as the content and the novelty of the professional project presented are crucial too.

“As I had to perform well under enormous pressure and on a very tight schedule, preparation was key. Each sentence, word and stress had special importance in my presentation to obtain the approval of the international jury. As everyone had only one chance at the finale, I couldn’t afford to make any mistakes,” Ádám Fülöp, whose preparation for this and his previous competitions was assisted by Kinga Györffy, presentation trainer, said of the hopeful moments of the finale.

This year’s competition was very diverse with the widest range of research topics and innovations introduced by the candidates, from whom three were given the opportunity to showcase their ideas on the second day of the competition in front of an 18-member jury and an audience of several hundred people. “Very powerful and meticulously elaborated projects were chosen to be the best this year. The first place was awarded to the Egyptian researcher of the University of Rochester Medical Center for developing extremely realistic replicas of human organs of the same size as the patient’s, allowing surgeons to rehearse procedures prior to complex cases. The “bronze medal” was given to the Nepal-born researcher of the Auckland University of Technology for her special nano-fiber filters,” BME’s student and the winner of the second place said of the projects of his greatest rivals adding that the jury may have preferred the fact that he presented a concrete, physical product complete with a fully developed and carefully designed business plan.

The Hungarian candidate was approached by several of his competitors during the two-day conference who praised not only the supreme technological delivery but also the noble cause of his innovation. “On our journey, we had to face and subsequently overcome many uncertainties and failures. Recognition like this helps us fight difficult situations and gives impetus, faith and inspiration to continue,” Ádám Fülöp explained. He said that in the past year there were changes in the team with some of the members replaced. In addition, he spent the spring term in Lisbon on a foreign scholarship, which further increased the difficulty of keeping the team together and integrating the new members.

The team leader also reported that at present they are improving the prototype and working on its design. They are in constant touch with representatives of their target group and continuously collect feedback from their users: “one of our visually impaired testers taught us that many readers had difficulty in finding the beginning and the end of the lines, i.e. the start of the text to be understood, while others read by touching the Braille characters with their fingers turned at 90 degrees.”

The funds for further development are provided from prize money won at innovation competitions. This spring, they won the national final of the Chivas Venture international innovation competition and were selected to compete in the global final where they were awarded a total of HUF 2 million to further develop their smart glove. This year, they participated in Design Terminal’s three-month long mentoring program supporting startups, which helped bring their team closer together, while also receiving a great amount of assistance from BME: the 3D printing of one of their first prototypes was facilitated by Demola and currently they are attempting to map the hardware market through their connections made at BME.

The team is currently in talks with investors about GlovEye’s market release. “We forecast that it will come out early next year,” said Ádám Fülöp of his expectations and added that: “based on the preliminary but still unconfirmed plans, the device will be sold for HUF 100 000–120 000.” The team is also planning to target foreign markets and is currently becoming familiar with applicable foreign regulations and the methods of acquiring the required approvals. They would also like to expand their team and are looking to recruit partners and students to be engaged in marketing and sales while also welcoming students interested in the hardware and software development of the device. (Editor note: for more information visit GloveEye’s website or Facebook page.)

“GlovEye is like our own child. Our team members sacrifice their free time to invest a lot of energy and time into improving our product and developing our business strategy and we have high hopes that we can see our innovation on store shelves in a few months’ time,” the silver medallist of the competition in Berlin concluded.