“Creative and climate-friendly solutions were developed”

BME hosted this year’s Budapest Climathon, a 24-hour hackathon, which focused on proposals to promote the environmentally friendly use and liveability of the riverbanks of the Danube.

“This year’s competitors were ambitious young people strongly committed to environmental protection. Their dedication was demonstrated by the high number of promising solutions, created in only 24 hours, to develop the Danube, which runs through Budapest, and the riverside areas in a climate-oriented way. This event is further proof that BME is eager to support the development of innovative approaches and encourage novel solutions,” said Tamás Pálvölgyi, associate professor and department head of the Department of Environmental Economics at BME’s Faculty of Economic and Social Sciences (GTK) after the Budapest Climathon 2018 hackathon. The event takes place simultaneously in nearly 100 cities around the world using the same scenario. This year’s event in Hungary was jointly organised by GTK’s Department of Environmental Economics, EIT Climate-KIC and the Mayor’s Office in Demola’s interactive, creativity inspiring, modern facility. “This programme is an excellent example of how BME’s various organisational units can successfully work together to achieve a noble purpose,” Mr. Pálvölgyi added. 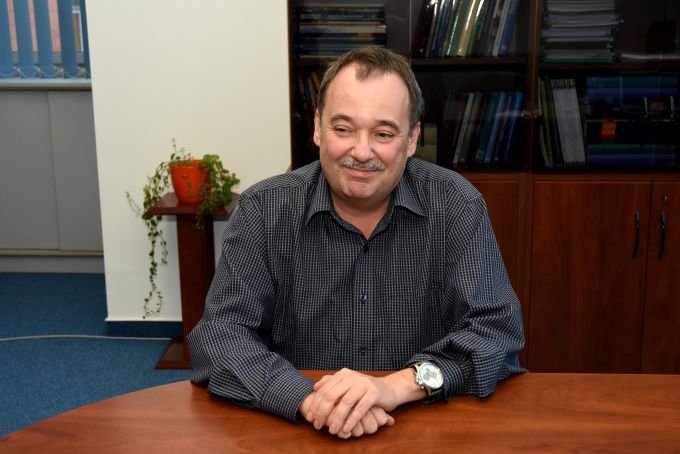 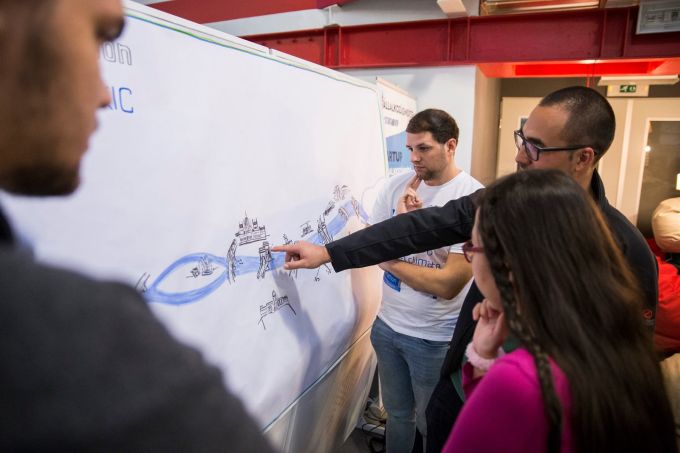 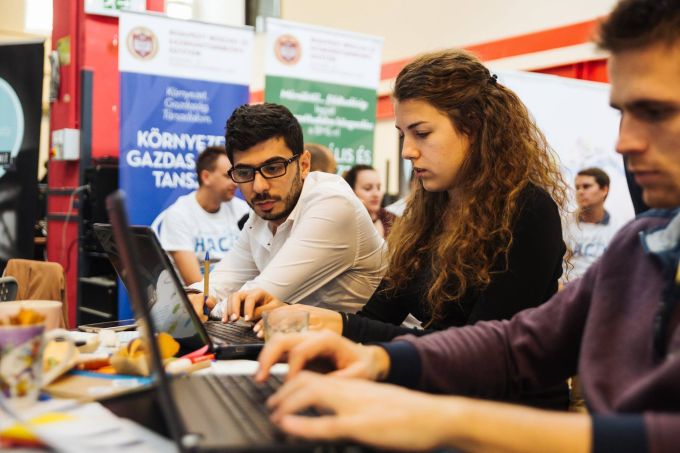 “This year’s competition was highly popular attracting not only BME students but also students studying in Hungary in the Erasmus programme as well as young Hungarian and foreign professionals, so all the teams were multidisciplinary. The participants were divided into teams of 4-5 and were allowed 24 hours to freely create and provide their preferred solutions to address Budapest’s riverside climate issues. The teams were working in English and the staff and PhD students of GTK’s Department of Environmental Economics gave them advice as mentors if they faced a block in finding a solution or were losing focus. The collaboration brought together the representatives of diverse cultures and interests and their ideas, leading to solutions combining modern digital technology and environmental aspects,” Tamás Pálvölgyi said. 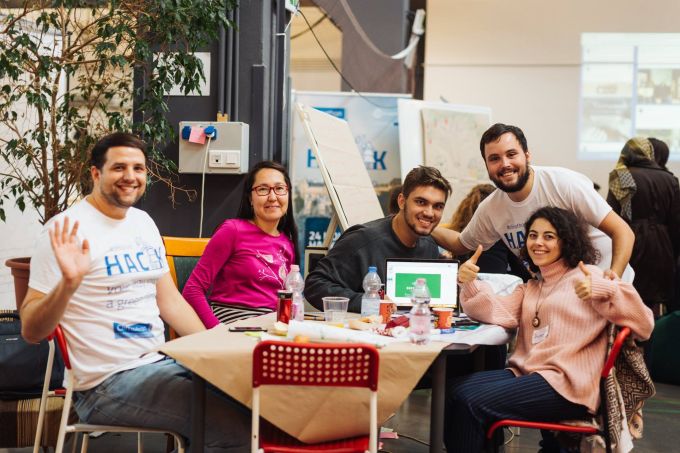 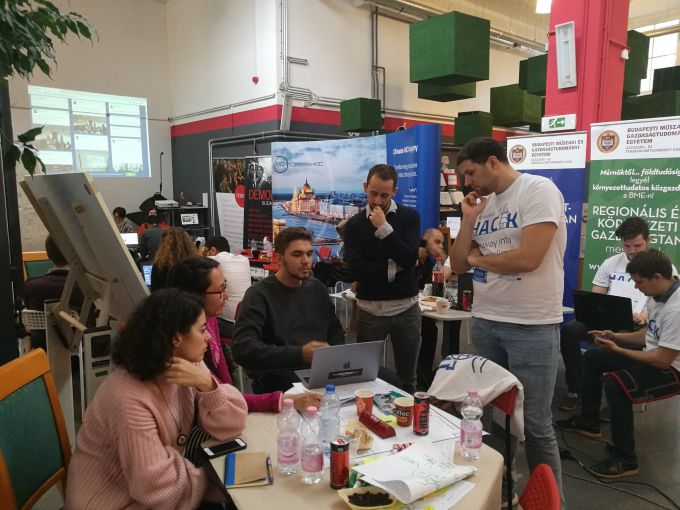 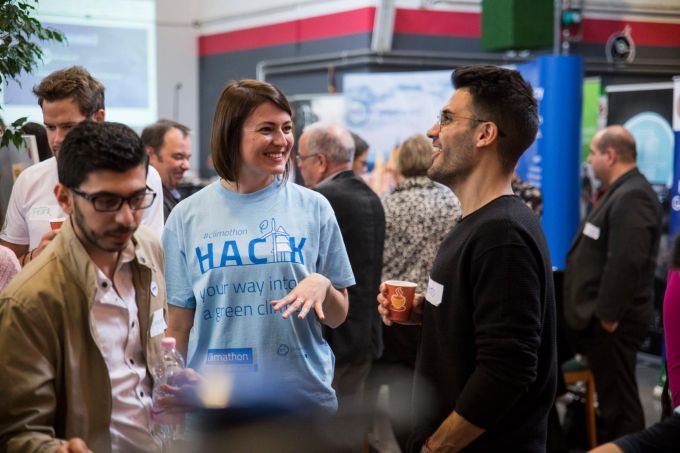 “The competitors came up with some smart development ideas, which could all compete successfully internationally and could likely be implemented after a detailed elaboration,” said the head of BME’s department organising the event evaluating the teams’ work. The winning team called Beyond designed a self-sustaining, solar powered community meeting point supporting mental recreation for young people. The team envisaged this community space as a permanent building to be located at Kopaszi-gát providing free wi-fi and battery charging facilities for the visitors. The space would be complete with a community garden, equipped with an automatic irrigation system to supply the necessary nutrients, where anybody could grow their own crops. The winning team included BME’s two students studying environmental engineering, Krisztina Kurucz and Anna Szigeti as well as Suha Ali Ismael Ahmed, an architect and Erasmus scholarship recipient. 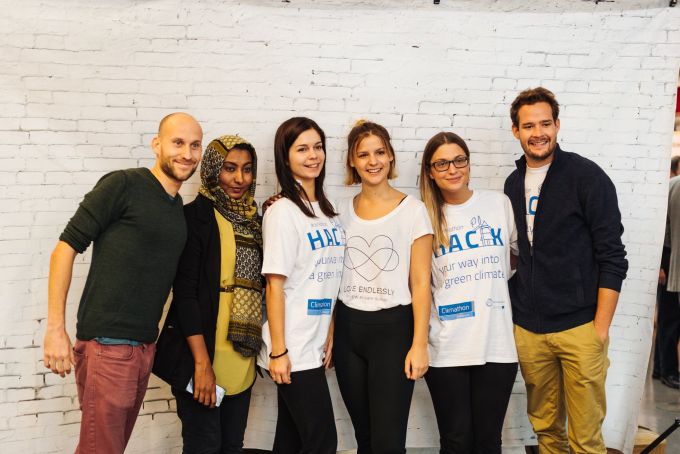 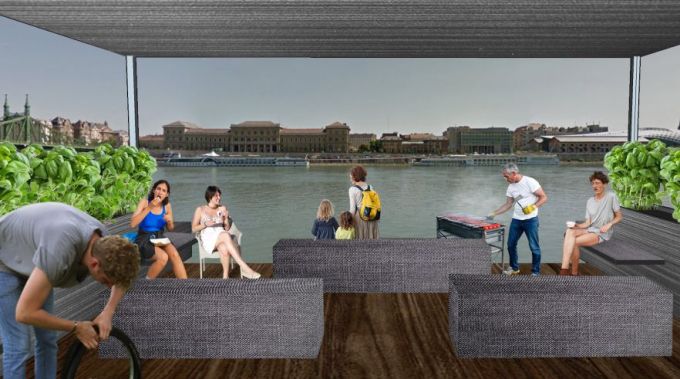 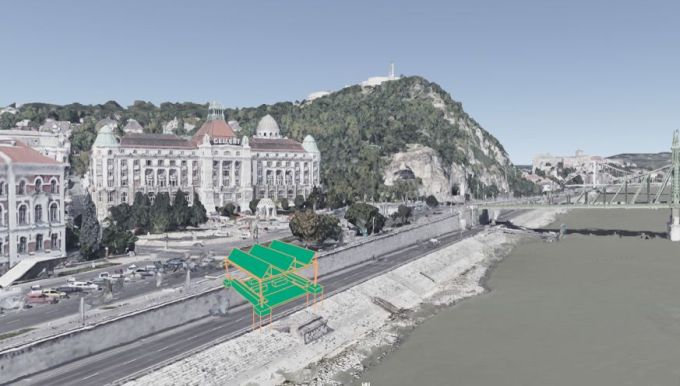 Another team developed a smart device application for urban cyclists: the software can estimate the amount of “power produced” by cyclists while riding around the city. Meanwhile, the cyclists would be rewarded receiving double recognition for riding along the Danube. Explaining the potential of their development, they said that Budapest currently takes the impressive 13th place among the world’s most bike-friendly cities with every fourth inhabitant of Budapest using a bike every day. “This team received a special award from GTK’s Department of Environmental Economics allowing them to present their ideas to the public at a conference held at the Hungarian Academy of Sciences to honour the Celebration of Hungarian Science 2018,” said the head of the department recognising this IoT solution.

Other innovators focused on a previously unused area proposing to install turbines on the bottom of the Danube to use the renewable energy source provided by the river current to supply power, for example, to self-sustaining open offices located along the river. Their goal was to allow young people to work and study in a nature-like environment with access to modern technologies while being able to enjoy the view of a world heritage site. The designers also intended to raise public awareness of the enormity of the global problems caused by climate change. 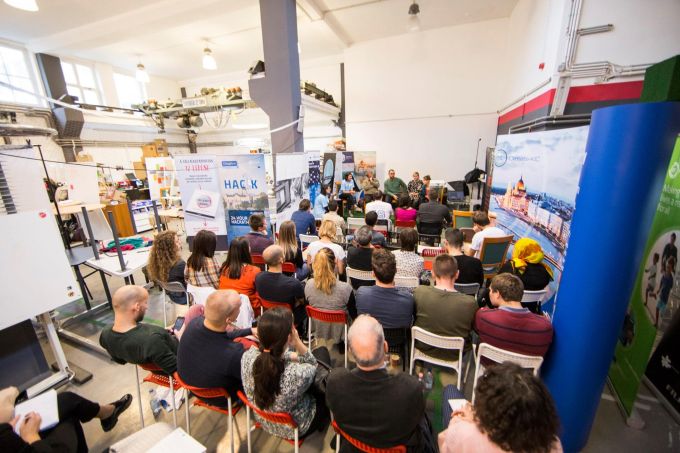 In the 24-hour competition, there was a proposal developed to build a community park on an artificial island in the Danube. Power to the area would be supplied from renewable energy sources and using recycling. The competitors’ idea could also address the problem of the scarcity of riverside green areas available for community use, needed especially by Budapest’s population living in housing estates, in hot weather during summer months. The place would also serve recreational and educational purposes including a programme to raise awareness of the finite nature of fossil fuels and the importance of climate protection. 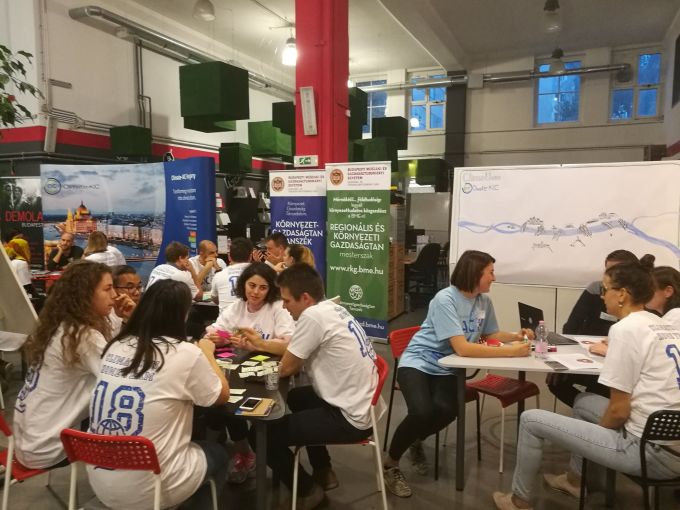 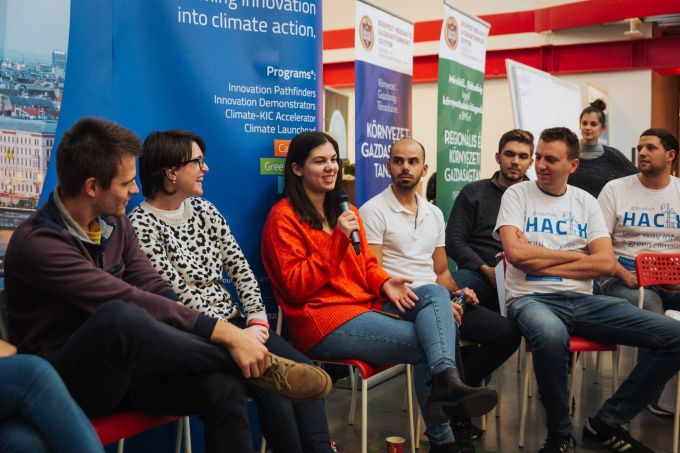 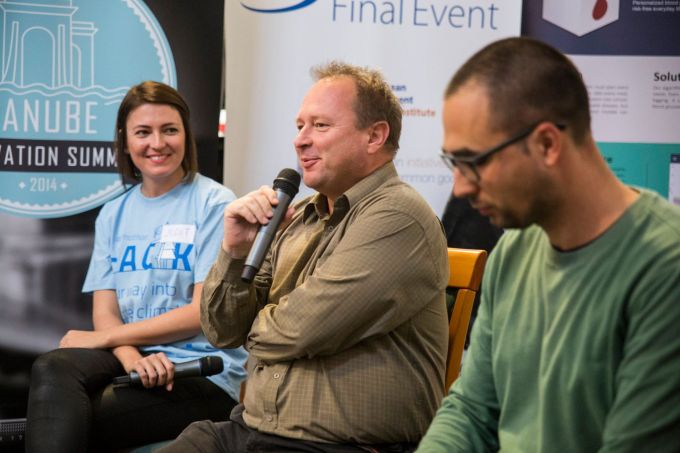 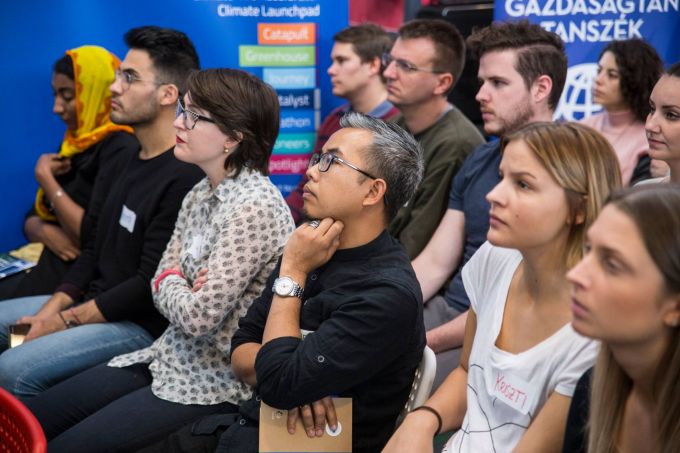 Tamás Pálvölgyi added that the competition is not only designed to promote specialist work but also to strongly encourage networking: “we hope that this event will help build long term cooperation and professional relations between these young people of similar interests and mindsets.” Under the cooperation agreement signed between BME and Climate-KIC, the faculty is currently working on receiving the EIT label as a certificate of quality awarded by the European Institute of Innovation and Technology to add to GTK’s regional and environmental economic studies master programme. 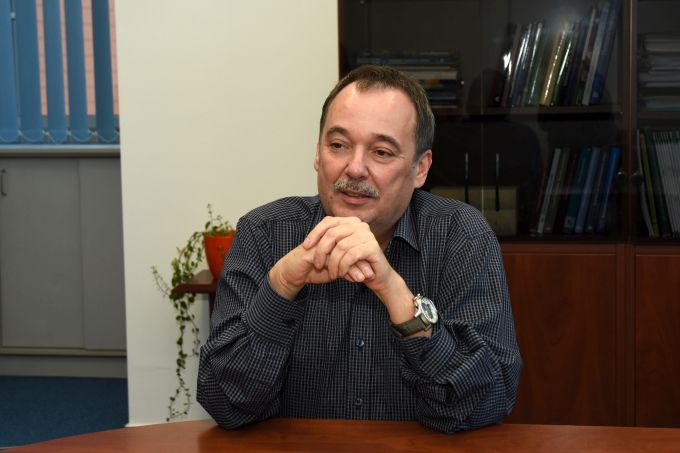 After the competition, GTK together with the Demola facility at BME encourage and support all the young participants regardless of their placement in the competition to continue working on their ideas; they will also incubate the most promising programmes (providing competitors with professional advice, business relations and access to the Demola facility as needed) and ensure that the proposals, which at present are only available in theory, will be turned into tangible solutions potentially even attracting investor interest.