BME's engineers to support the Hableány rescue and recovery operations

Several experts from BME were involved for a considerable length of time in the work of the authorities after the boat crash.

BME's experts participated in the rescue and recovery operations of the Hableány (Mermaid) pleasure boat, which capsized on the Danube on 29 May 2019 under Margaret Bridge. Rector János Józsa, one of the founders and scientific leaders of the Knowledge Centre for Water Sciences and Disaster Prevention, was asked by Minister of Interior Sándor Pintér on the night of the accident to provide engineering-related support during the rescue. BME's experts agreed to the request and joined the operations on that first night, giving professional support to the authorities. Our hydraulic engineer and naval architect colleagues have been working hard for two weeks to give precise answers to all the engineering issues arising during the rescue and recovery operations. 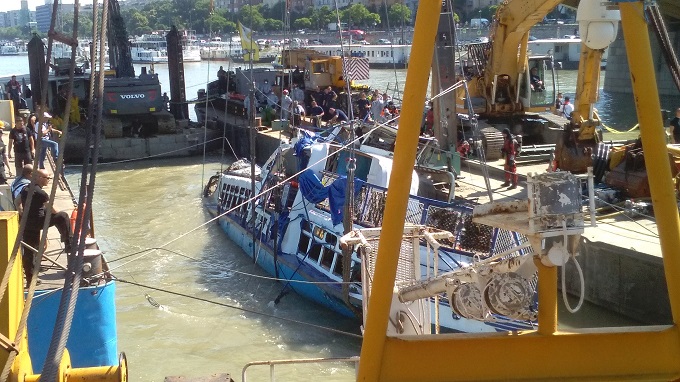 First our hydraulic engineers were contacted to study the currents in the relevant section of the Danube so that the surface load on the divers could be estimated. Based on the brief expert opinion it was calculated that the force exerted on the divers was similar to that of a hurricane, which would have put their lives in danger. The document, which also used flow velocity data measured around the hull by the General Directorate of Water Management, confirmed the divers' own experiences, which suggested that the environment for diving would have been life-threatening in the first few days.

A week later, in the second phase of the technical rescue operation, when the position of the sunken boat was located by using continuous hydrology measurements and information provided by the divers, the elaboration of the technical plan for lifting the Hableány by crane was begun. In this phase our naval architect experts provided help over the phone on several occasions and were also present at the on-site centre of TEK (Counter Terrorism Centre) to help with the recovery. The key engineering issue was to identify the number, and positioning, of straps to be placed around the hull to prevent it breaking up while it was being lifted onto the surface. For this the hull strength calculations of our experts were used. It proved to be extremely challenging, because the positioning of the straps had to be modified several times during the extraction. The problem was that often divers were unable to place the hoisting straps exactly in the previously calculated points. Eventually, based on the planned lifting procedure approved by our engineers, the extraction of the wreckage by crane began on 11 July. Our experts were on site on the day to supervise the operation. Due to a fracture, identified at the back of the boat during lifting, the number of lifting points had to be revised. An additional strap was placed to ensure the safety of the operation. As a result of the joint efforts, and after placing the fifth strap, the wreckage was successfully lifted out of the water and taken to a secure location. 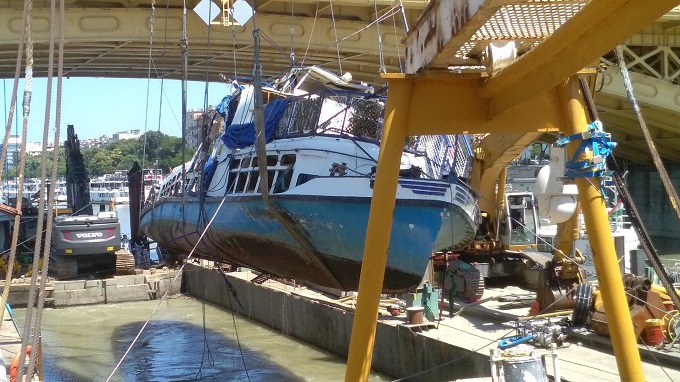 During the two weeks of their involvement, BME's hydraulic engineers and naval architects proved repeatedly that using engineering solutions in practice could greatly contribute to the successful rescue and recovery operations of the authorities. During the cooperation their extensive knowledge and experience in the topic, as was also proven by their participation in the Higher Education Excellence Programme, proved to be a great help for practical experts involved in the operations. Based on the success of our joint efforts we believe that we will be able to provide engineering support to the authorities in other future operations, hopefully in connection with events that do not claim lives. 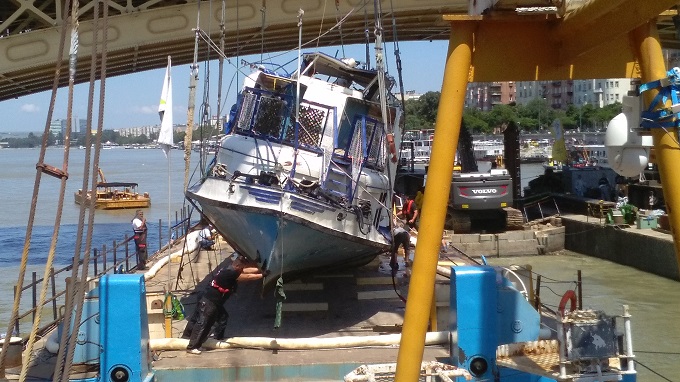 To our greatest regret, this tragic boating accident unfortunately had many fatalities. We wish to extend our deepest sympathies and heartfelt condolences to the families of the victims.