“I started my research backed by an exceptional group of professors”

”It is a tremendous honour that my work as a relatively new researcher is recognised by renowned experts whose scientific and professional achievements inspire most young people,” said Krisztina Regős, third-year architect student at BME's Faculty of Architecture (ÉPK) after her student science paper examining the geometric and mechanical characteristics of pentahedra (pyramids) received an outstanding recognition. The young talent progressed in first place from the BME round of the TDK (Scientific Students' Associations) competition to qualify for the 34th OTDK national competition where she received a special award and the Best Presenter award in her section and was also selected to present her work at the Hungarian Academy of Sciences (MTA) where she was given one of the four national OTDK presentation awards. 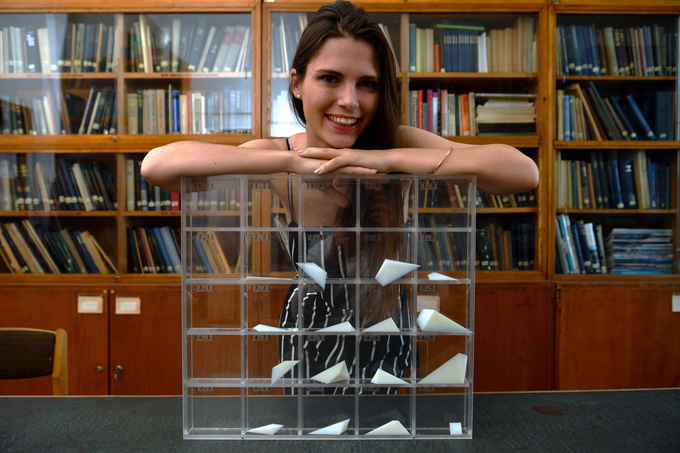 The research of BME's architect student was inspired by a 50-year-old American mathematical conjecture proposed by John Horton Conway, mathematician at the Princeton University and inventor of the computer Game of Life. Based on his observations, the British researcher found that there are no monostatic pentahedra (square pyramids), i.e. ones which can stand in equilibrium on only one face or vertex. His idea remained unproven for 50 years, until now as Krisztina Regős has achieved a remarkable partial result in proving Conway's conjecture.

”Based on the number of faces and vertices they can stand on, pentahedra can be classified in 25 different categories. Conway assumed that pentahedra did not exist in 9 categories but did exist in the remaining 16 categories. My research focused on the latter part of the conjecture,” Krisztina Regős explained. To support her work, she devised a customised computer programme to identify samples in the specific categories examining the potential equilibria of over 62,000 pentahedra. Based on her own calculations, she did not find any samples in the excluded group of 9 categories but she could find samples in each of the 16 categories that confirmed Conway's conjecture. The absence of the 9 categories supports the first part of the idea while the existence of the 16 categories proves the second part. To demonstrate her findings in an easily understandable format, the young talent presented a 3D print of a sample pentahedron in each of the examined categories. In addition to the scientific presentations, these contributed to her success at a job interview when she was applying for her current summer traineeship. 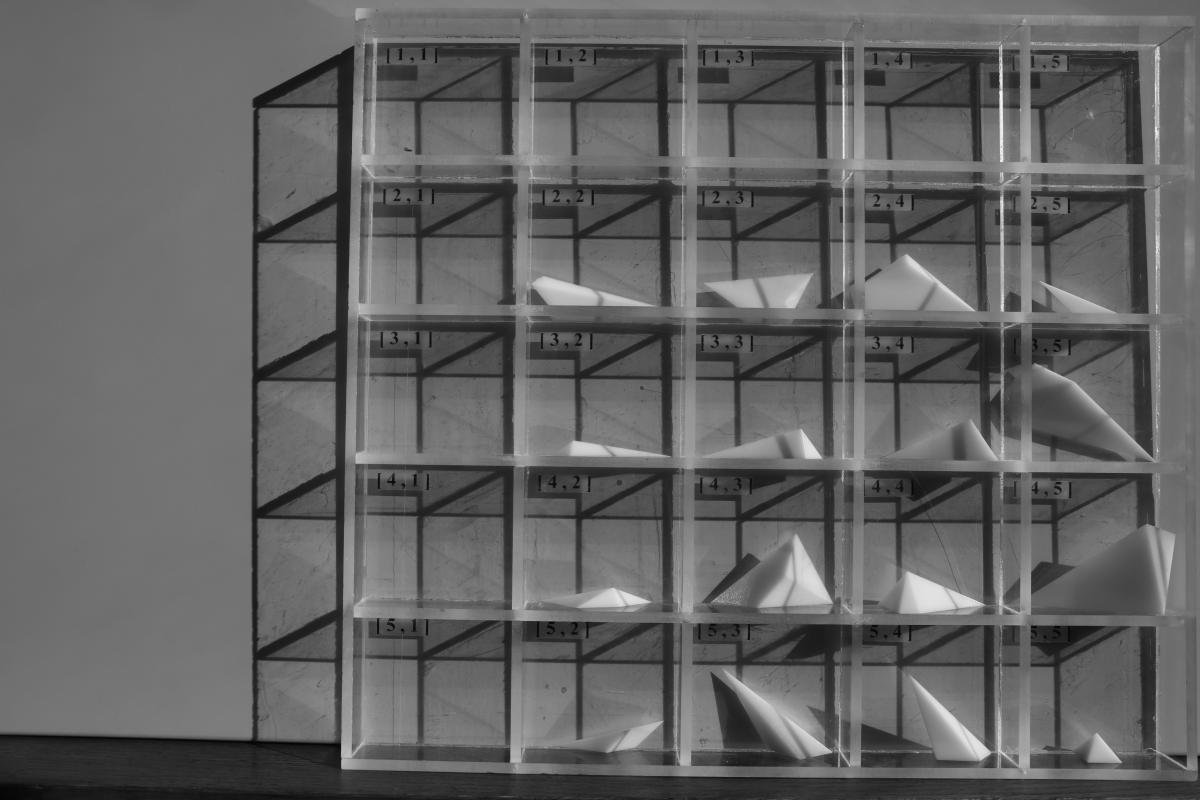 Krisztina Regős conducts her research in the MTA-BME Morphodynamics Research Group, which has been working based on the collaboration of various faculties and fields of expertise for many years including professionals from the Faculty of Architecture, the Faculty of Civil Engineering, the Faculty of Mechanical Engineering, the Faculty of Electrical Engineering and Informatics and the Faculty of Natural Sciences. Krisztina's research topic perfectly fits into the interdisciplinary scientific project of the group aiming to describe the shapes of the inanimate nature and their changes over time; this project includes not only theoretical work but also field measurements, laboratory tests and equipment development to generate the 3D data used in natural science to verify mathematical and physical models. As Krisztina needed mathematics and programming skills to support her research and help understand the physical processes in her experiments, she learned to programme specifically for the sake of this project and started her calculations with her own modelling software. In acquiring this broad range of knowledge, she was supported by the professors of three of BME's faculties: the topic was proposed by one of her consultants, Gábor Domokos, professor at the Department of Mechanics, Materials and Structures at the Faculty of Architecture, who supported her throughout her research; Zsolt Lángi, associate professor at the Department of Geometry at the Mathematics Institute of the Faculty of Natural Sciences who helped her understand the theoretical mathematical background and Norbert Kovács, assistant professor at the Department of Polymer Engineering who offered her invaluable support in the high precision 3D printing of the pentahedra of diverse shapes and forms selected to demonstrate the examined bodies and the research results.

Her mentors believe that the fact that a 20-year-old young woman who won mathematics, physics and chemistry competitions while constantly excellently performing at the Faculty of Architecture shows that she is not only an exceptional and versatile talent but also a person with extreme stamina and dedication, adding that Krisztina's visual and mathematical aptitude and her interest in architecture are outstandingly reflected in her selected topic.

While the research conducted by the young recipient of multiple awards focuses on theory, her results have significant practical benefits: ”a deep understanding of the geometry and mechanical characteristics of polyhedra can lead to the description of rock fragments, the prerequisite of natural abrasive processes,” Krisztina Regős explains, who thinks her findings may be useful for the examination of Martian stones, similarly to the Gomboc, discovered by her consultant, Gábor Domokos, which inspired the design of an insulin capsule delivered into the stomach a few months ago. (Editor note: bme.hu reported previously on the discovery) 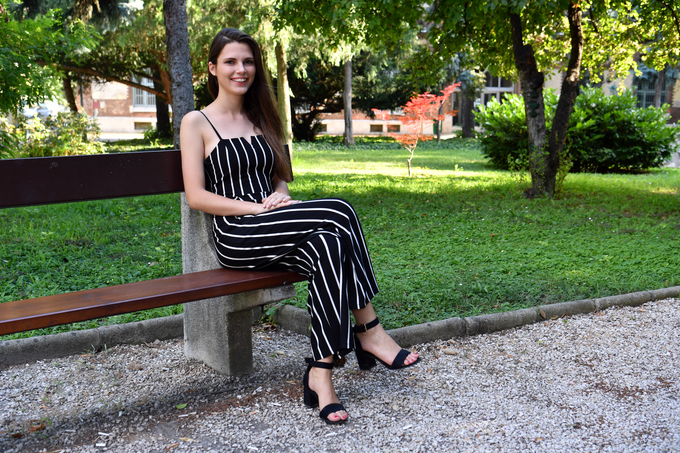 Krisztina Regős appeared to be already interested and gifted in science and maths at secondary school, and she enjoys solving mathematical problems as well as carrying out theoretical research. ”I prefer traditional methods: I do my calculations on paper as long as I can and I only use my self-designed computer programme as a last resort,” the young BME student said revealing an interesting aspect of her work method. She is excited to be involved in serious scientific work at a very young age while eagerly trying to obtain as much knowledge and experience in architecture as possible, doing her traineeship with a design firm in the summer as well as studying and conducting her research. She is already consciously building her career and planning to continue the research she has started. ”I firmly believe that Conway's conjecture is true and that I will be able to definitely prove it by finding some practical examples. I am supported by a remarkable group of professors who have been helping me implement my ideas up until now and I hope that I will be able to achieve further results in the examination of pentahedra thanks to their encouragement,” concluded Krisztina, who would like to work on the analysis of the equilibria of more general geometric bodies in the long term.