The Department of Polymer Engineering represented BME at the most prestigious plastic industry exhibition.

„The event and our booth received a great deal of attention: we received much positive feedback and praise from our visitors, and Hungarian and foreign partners. I would like to thank József Gábor Kovács, without whom we could not have taken part in the event. He came up with the idea of going to the exhibition and presenting ourselves there; previously we did not dare to dream this big. Now that the exhibition is over, I can say that we successfully realized all our plans, which would not have been possible without the dedicated and persistent work of our colleagues. Our participation in this event reinforced our conviction that we are competitive internationally and I can proudly say that we are at the forefront in our professional field in every respect”, said Tamás Bárány, associate professor, head of the Department of Polymer Engineering of the Faculty of Mechanical Engineering (GPK) at BME, after the Department was an exhibitor at the “K 2019” exhibition in Dusseldorf. „I have worked on numerous Hungarian (National Competitiveness and Excellence Program, Competitiveness and Excellence Cooperations), European Union and other international projects with my colleagues. In one of the NVKP projects, we won the Innovation Award of JEC in Paris with a consortium led by HD Composites Zrt. (Econ Engineering Mérnöki, Szolgáltató Kft., MTA TTK), which we are very proud of”. (A separate article can be found about this exhibition and award at bme.hu) 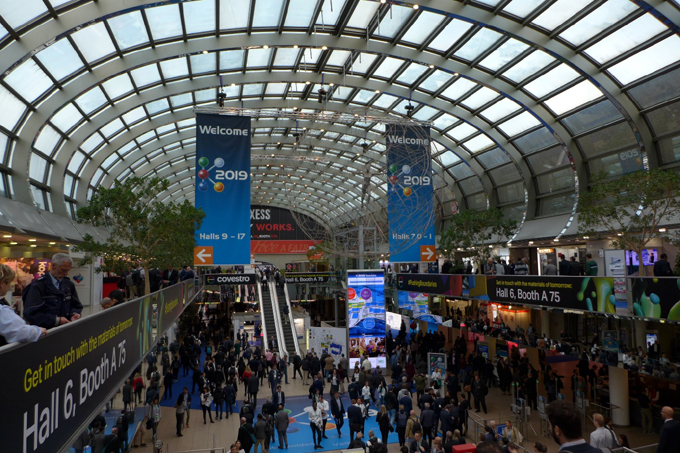 The Aula of the exhibition

„The department has built an extended network of partnerships in the past two decades and many of our partners have visited us, too. In addition to deepening professional relationships, we discussed potential cooperation with numerous new research institutes and companies”, said József Gábor Kovács, deputy department leader. „My right-hand man was assistant professor Péter Bakonyi, who helped with many logistic and organizational tasks, and also designed the elements of the stand and their layout; the result was magnificent. Our booth also presented Flaar Boats, led by our assistant professor Zoltán Mezey, and one of the internationally acclaimed sailing boats developed and manufactured by the company. Due to its size, the whole boat could fit into the booth, so only a slice of it was shown but it still made our booth more spectacular. The company of one of our former students, Sándor Kling, was also represented. Kling Technology exhibited a specially designed composite rim. Although the booth was only 52 square meters, the visitors were able to take a virtual tour of the whole laboratory of the department, which is 1200 square meters; it had been 3D scanned by Mensor3D Kft., led by András Fehér.

The two-cavity hot-runner injection mold was designed by Róbert Boros, our doctoral student, who graduated in our department and spent 10 years in a company designing molds before returning to us. The product, in addition to being an excellent coaster, presents a guideline for injection molding design, the standard surface roughness achievable with the technology, weld lines, and surface defects, and the most commonly used rounding radii. This way, it can be a useful aid for product design engineers in their everyday work. „We started preparing for the event a year before but things really sped up only a few months before the exhibition. However hard we tried, we were only able to finish at the last moment: there were items that only arrived as we were loading things on the truck. The exhibition lasted more than a week but it was preceded by three days of building and followed by one day of disassembling. My colleague, Dániel Török, also helped a great deal with the preparation and tasks at the event. The exhibition was huge; it occupied an area roughly four times the area of Hungexpo. We are not professional exhibitors, and so it was a real challenge for us to create exactly what we dreamed up at home, in the hustle and bustle of heavy trucks and forklifts. Fortunately, everything went well and we presented numerous technological innovations and materials development results of the department to interested visitors”, said Péter Bakonyi, assistant professor.

The BME Kármán Stúdió shot a short film about the development and manufacturing of the mold and some other interesting details. 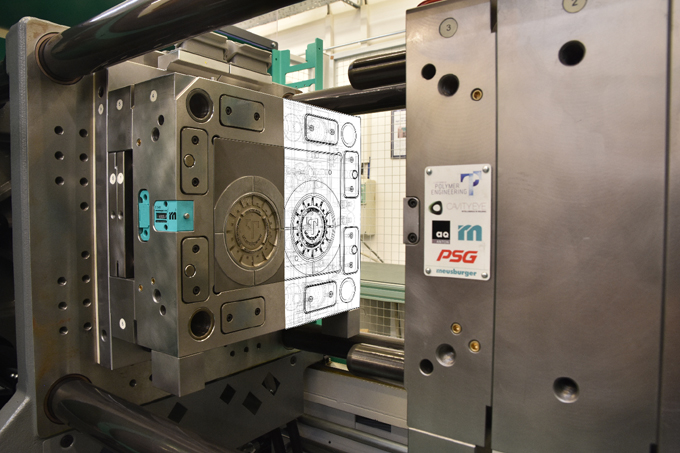 The hot-runner mold made for the exhibition

József Gábor Kovács said, „it was a challenge to think of and design a product which shows technical information, thus helping young engineers in their work, and which is also a useful everyday object”. He added, „the students can also work with the first hot-runner mold of the Department in the laboratory after the exhibition, and we also hope that it will inspire many theses and scientific students’ association projects. We are very grateful to our partners for their help: the mold was manufactured by AQ Anton in Zalaegerszeg, from injection mold sheets provided by Meusburger, and other elements; the hot runner and its control unit were provided by PSG, while we got the pressure sensors and the related control unit from our partner exhibitor, Cavity Eye Kft. This unique, world-class pressure sensor system was developed by this Hungarian company”. 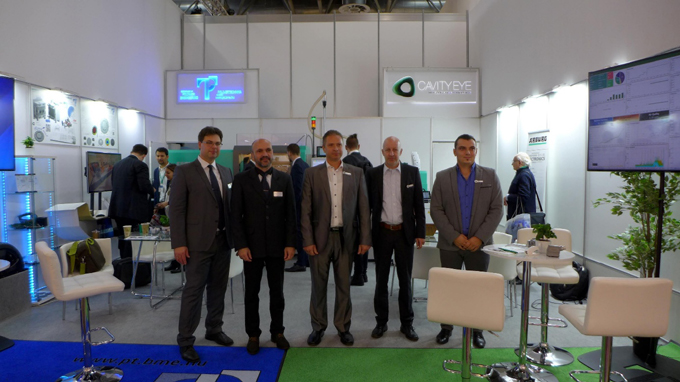 Not only teachers but also students of the Department took part in K 2019, so not only the exhibition team traveled to Dusseldorf. It is a tradition in our department that every third year, teachers and students travel to Germany together in two buses. This year, more than 100 of us went to the exhibition; similarly to previous years, we were the largest university visiting group. We got the tickets from our industrial partners and we would like to express our thanks to them, especially to Szilvia Máté and BD Expo Kft., and the Hungarian Plastics Association. I am also very grateful to József Gábor Kovács, Péter Bakonyi, Róbert Boros and Dániel Török, and to my other colleagues for their help”, stressed Tamás Bárány, who mentioned that they also advertised the single-semester courses available at BME through the Erasmus program to the many foreign university students who visited their booth. He added, „it was good to see that many of our former students are in a leading position now and to meet them in Dusseldorf in this capacity; this shows well the quality of the mechanical engineering degree obtained at BME, and also its international competitiveness”. 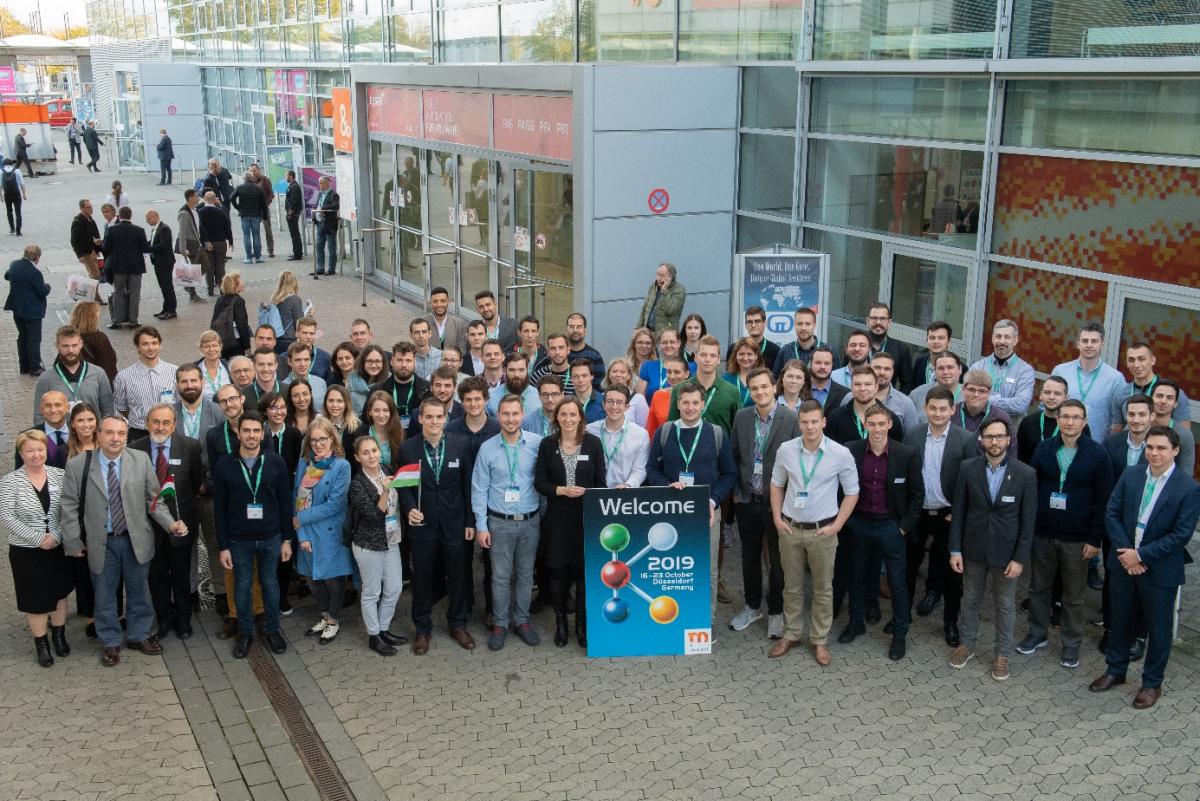