Two faculties at BME worked together to create a prototype suitable for invasive and non-invasive ventilation in an extremely short time, with mass production to make the first 1000 devices already begun.

János Józsa, BME's rector was entrusted by Sándor Pintér, minister of internal affairs, on March 12 2020, to launch and coordinate a ventilator development project involving the university's experts. The eminent researchers in the fields of safety critical system design, mechanical and electronic design, software development, manufacturing, fluid mechanics, mechatronics and materials science needed no more than a few weeks to complete this project of diverse disciplines thanks to the availability of a high level of expertise necessary for innovation, the technology required to respond to the challenges of the 21st century together with a broad array of support from corporate partners, especially BME's suppliers. The timeline for the project was approved by the Ministry of Internal Affairs (BM) and the components for the prototype were financed by the Ministry for Innovation and Technology (ITM) through the National Research, Development and Innovation Office (NKFIH). The project work involved a variety of departments from the Faculty of Mechanical Engineering and the Faculty of Electrical Engineering and Informatics under the guidance of head physician, Jenő Elek. Eventually, the project team designed two prototypes: a PLC-based version, integrating standard programmable controllers and a microcontroller-based device controlled by custom-made electronics. 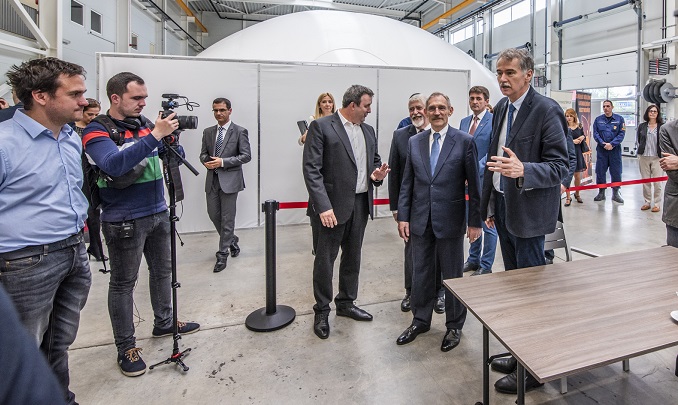 János Józsa, BME's rector, thanking the ministries for their support and BME's instructors/researchers for their design work, in the presence of Miklós Kásler, minister of human capacities and László Palkovics, minister for innovation and technology, in the production plant of BM Heros Zrt., the company responsible for the mass production of the device, in Kőbánya (Photo: Péter Szőke/BM OKF)

The mass production initially began with the PLC-based ventilator, which will be soon replaced by the device with custom-made electronics. 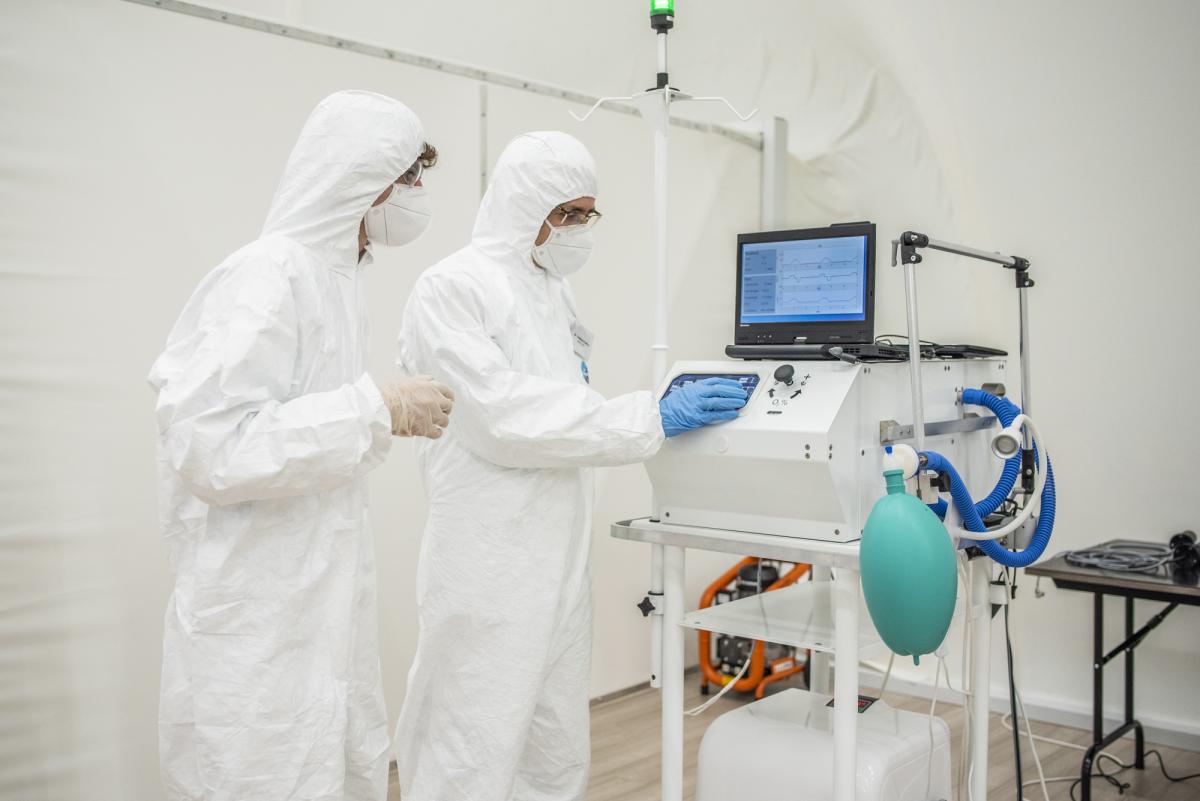 Tamás Dabóczi, university professor and head of the Department of Measurement and Information Systems at the Faculty of Electrical Engineering and Informatics (VIK) and Péter Nagy, PhD student at the same department, introducing version C of the BME-designed ventilator in the enormous tent at the production plant of BM Heros Zrt. in Kőbánya (Photo: Péter Szőke/BM OKF) 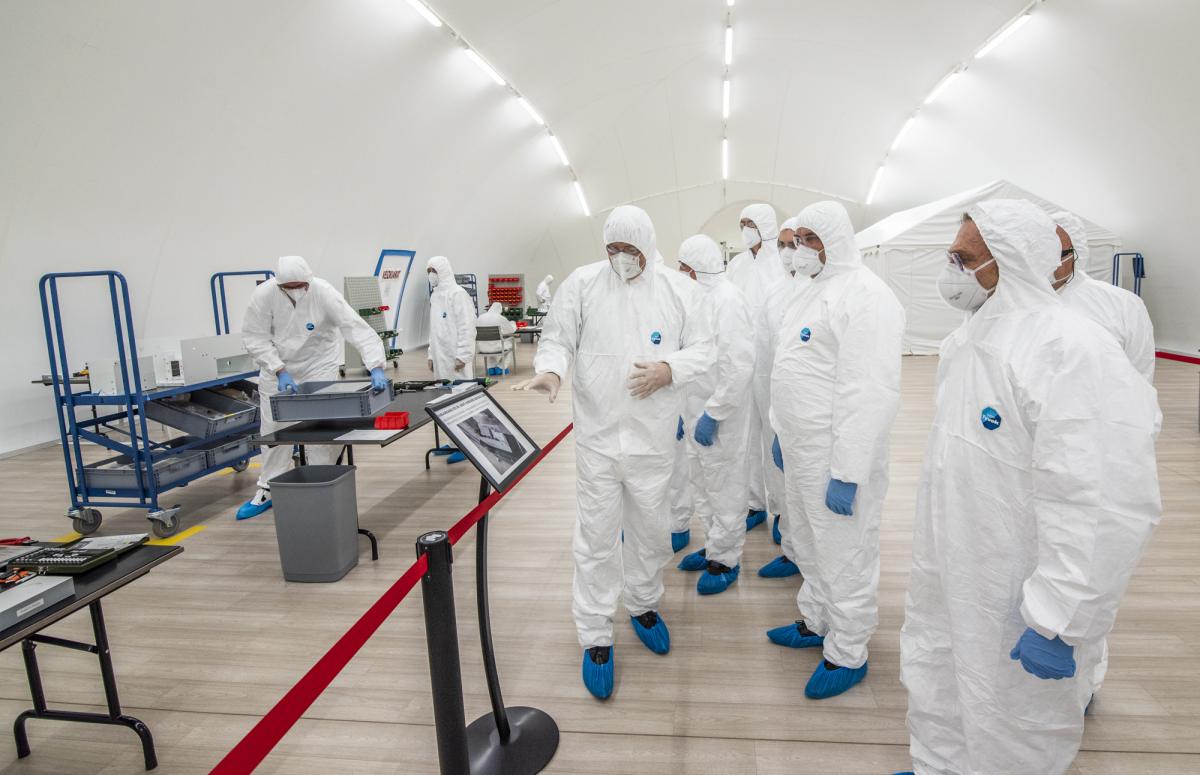 József Nyirő, assistant professor at the Faculty of Mechanical Engineering (GPK), sharing the details of the mass production

The mass production is performed by the state-owned BM Heros Zrt. based on the production and assembly specifications developed by BME's specialists. However, it should be stressed that BME's specialists did not only assist in the design and the execution phase but also contributed to the sourcing and manufacturing of the necessary custom-made components. 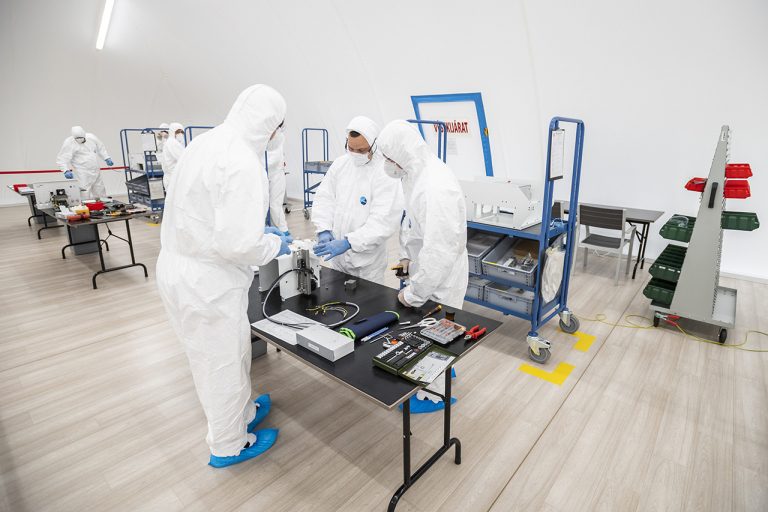 Assembly of the ventilators that are fully compliant with hygiene and safety requirements and equipped with air filters is under way in the enormous tent installed in the production plant of BM Heros Zrt. in Kőbánya (Photo: Márton Mónus/MTI)

The team working in the 450 sq metre production plant, and the tent inside it, on the production of the BME-designed ventilators includes 17 specialists. A total of 10 devices are planned to be manufactured every day.

The ventilator developed at BME is suitable for both invasive and non-invasive ventilation. It can be used for long term oxygen supply for any type of respiratory problem (chemical, bacterial, viral including COVID-19 caused by SARS-CoV-2). As users are able to adjust all the standard parameters of the device, the options of traditional ventilation methods, controlled ventilation and partial extubation protocols are all available. The university was originally commissioned to urgently develop a life-saving device for potential emergencies. The device designed here has a host of other advanced features as it offers ventilation profiles, less stressful for both the patients and their lungs, beyond the traditional ventilation methods. Furthermore, as the oxygen levels may be controlled much more precisely than in other currently available modern devices, it is expected to be patented soon.