Internationally acclaimed joint publication by BME and Semmelweis University on the antiviral properties of chlorine dioxide.

“Five years ago we received the “Gran Prize” Interdisciplinary Innovative Award of the Swedish Chamber of Commerce for our high purity ClO2 antimicrobial solution, named Solumium, which is capable of killing all microbes (bacteria, fungi, and viruses). This acknowledgement was largely due to the fact that our solution is also effective against antibiotics-resistant bacterial strains and that pathogens are unable to acquire resistance to it. The recent pandemic lead us to re-evaluate the antiviral effect of this agent”, Zoltán Noszticzius, professor emeritus at the Department of Physics of the Institute of Physics at BME’s Faculty of Natural Sciences revealed to bme-hu, following the publication of an article, written with his colleagues at the department, assistant professor Kristóf Kály-Kullai and associate professor Mária Wittmann, as well as László Rosivall, professor emeritus of Semmelweis University, on the possible application of chlorine dioxide in the fight against coronavirus. Their article was published in Physiology International of AKJournals (Akadémiai Kiadó), but it is also available in Hungarian, entitled „Megakadályozhatja-e a klór-dioxid a koronavírus vagy más vírus okozta járványokat?” (Can chlorine dioxide prevent the spread of coronavirus or other viral infections?), subtitled „orvosi hipotézisek” (medical hypotheses), the latter referring to the fact that clinical trials, required to prove their hypotheses, involve a lengthy process which has just started. The scientific community immediately took notice of their work: the authors received encouraging feedback from their peers and there is a keen interest in their suggestions. The latter is clearly proven by the data of ResearchGate, a free social-networking site for scientists of all disciplines, according to which there was a week in July when over 5,000 people read the article, making it the most widely read Hungarian publication among those uploaded that week, and the most widely read article globally in the fields of Chemical Kinetics és a Veterinary Medicine.

The cedar tree planted at the time of receiving the Gran Prize Interdisciplinary Innovative Award and now; a telling sign of how long it takes for a scientific achievement to be applied.

“The article was published in March, just as we saw a sharp rise in new coronavirus infections in Hungary. I have many anecdotal stories about the effectiveness of the compound, but a rigorous clinical trial is necessary to prove its efficacy against COVID-19. Preparations for this are ongoing at the Korányi National Institute of Pulmonology. Our oral product, to be used by gargling, has been used to treat sore throats in general since 2008”, the researcher explained, adding that 90% of such problems are caused by viruses and the rest by bacteria. “Viruses - including coronavirus - mostly replicate on the mucous membrane of the pharynx, often causing rather unpleasant, painful soreness, although in the case of throat infections caused by coronavirus, a sore throat is not a common symptom. The real danger here is, not so much the involvement of the throat, but the possibility of the virus penetrating deeper and causing pneumonia. By using the chlorine dioxide solution for gargling, as well as applying it on a cotton swab inside the nose, a significant amount of the pathogens on the mucous membrane can be destroyed or, to be more precise, inactivated. Viruses are not considered as living organisms in the usual sense, but they can be inactivated.” 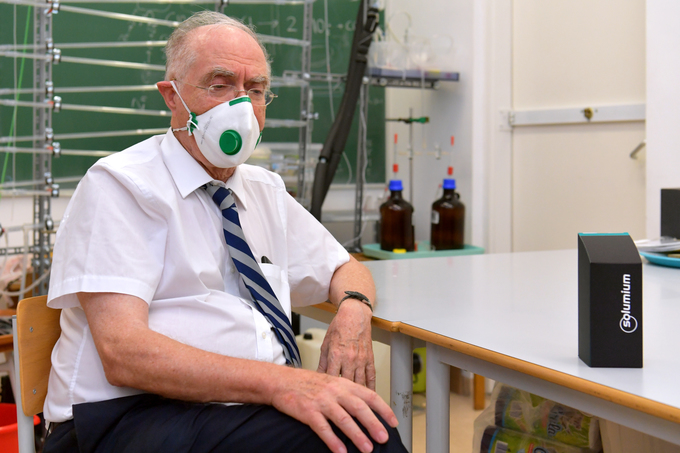 Describing the mode of action of chlorine dioxide, the professor explained that the compound successfully combats infections on the surfaces of the human body, but it is not able to penetrate it, which is a disadvantage and an advantage at the same time. It is a disadvantage, because it cannot be used to treat infections inside the tissues, which also gives its advantage, since it cannot impact or destroy our tissues and our circulatory system in any way. “We posed the following question in our previous scientific studies: how is it possible that it is completely harmless for humans to drink a ClO2 solution which is able to destroy microbes in a fraction of a second, even though amino acids which react with the compound can be found in every organism, including humans. Our research has proven that chlorine dioxide is a so-called size-selective antimicrobial agent. This means that it destroys the relatively small  pathogens rapidly  while human and animal cells, which are larger than the pathogens, are damaged much more slowly, and   ClO2 poses practically no harm to a multicellular organism like ours, which is a real giant compared to a single cell.”

The researcher recalled that the coronavirus pandemic prompted them to start mapping the behaviour of the agent against the novel coronavirus. Previously they only looked at these pathogens in general terms. Most viruses, including coronavirus, have an outer membrane, in which “spikes” are embedded. The spike protein binds to the human cell receptor like a key being inserted into a lock. Once it fuses with the cell membrane, the genome of the virus is allowed to enter the cells, as a result of which the cell starts to replicate the virus. This eventually leads to the death of the host cell and the replication of the virus. “ClO2 impacts the coronavirus by its rapid reaction with three of the twenty amino acid residues, cysteine, tyrosine, and tryptophan, found in all protein chains, while essentially not reacting with the others. Since the spike protein contains all three amino acids (for example there are 54 tyrosine residues in one spike protein), this could be an important point of attack; their oxidation changes the entire spatial structure of the protein, leading to denaturation. Once we manage to destroy the spikes, the ‘key’ no longer fits the ‘lock’ and the virus cannot function”, said Zoltán Noszticzius, adding that although we do not have specific and extensive scientific studies in this area yet, the compound’s ability to inactivate SARS, whose genetic make-up is very similar to COVID-19’s, has already been proven.

The cross-section of coronavirus (officially called SARS-CoV-2 ), which causes COVID-19. The diameter of the virion is approx. 100 nm. The virus uses its spike proteins to penetrate and infect human cells. The spike protein binds to one of the receptors in human cells (ACE2 receptor), just as a key fits into a lock. Chlorine dioxide, the active substance of Solumium, rapidly reacts with the tyrosine amino acid residues of the spike, marked in red in the figure. Thus the key is destroyed and no longer able to open the lock, which means that the virus is inactivated.

“Why is it that COVID-19 causes only minor symptoms in some people, while proving to be deadly to others?”, said the professor asking the question that worries millions of people and then providing the answer straight away: “we have a natural or so-called native immunity, which is stronger in younger people and is able to fight virus infections by itself. In most people, however, this is not sufficient during an intensive virus attack, so the body needs to develop its adaptive or learned immunity. This learning process takes 8-12 days and if, during this critical phase, too many coronaviruses reach the lungs, reproducing rapidly on its mucous membrane, this may induce a strong and often fatal immune response, called the cytokine storm”. He added that people infected with coronavirus not only endanger others when they cough, but may also inhale the aerosol particles again, since during coughing the virus is released from the throat in the form of an aerosol, which can re-enter the body, cause re-infection and reach the lungs. (This risk was pointed out by a research group from Semmelweis University.) “If the patient survives this previously mentioned period, which lasts around 2 weeks without getting pneumonia, the chances of avoiding serious complications are significant. By then antibodies, able to inactivate the virus, will have been produced. Although our hypothesis is based on natural science, the real question, requiring further research, is whether decimating the virus in the mucous membrane of the pharynx is enough to stop the virus reaching the lungs and causing pneumonia during the critical phase. Another important aspect is that Covid patients treated with chlorine dioxide are less able to spread the virus. We also wish to examine whether the solution could be used by healthcare workers for preventative purposes”, the professor revealed, adding that “we found that our article was read with great interest in Southern America, from where we received numerous positive responses, especially from our university colleagues. Although it is absolutely unrelated to our research, there is an increasing illegal, dangerous and potentially fatal trend in these countries to drink chlorine dioxide solutions of unknown origin and composition as a treatment against COVID-19. Naturally, we want to warn everybody against such futile and risky behaviour. Gargling with a science-based, officially licensed and marketed product of proven efficiency and consuming untested, questionable preparations sold as a panacea by self-proclaimed medical “experts” are as different as night and day. The viral infection poses its biggest danger to the respiratory system, so ingesting this compound is completely useless. Also, we do not yet have complex research on the impacts of the regular internal application of chlorine dioxide in large amounts.  The confusion is further exacerbated by the fact that the illegally sold sodium chlorite (NaClO2) solution is often wrongly referred to as chlorine dioxide, which was the case with the internally used and harmful MMS drops. Sodium chlorite is absorbed differently from chlorine dioxide, and can reach the kidneys and the liver. In small quantities its toxic effect causes vomiting and diarrhoea, while in larger doses it may lead to kidney failure, which is potentially fatal. Chlorine dioxide solutions are not medication to be ingested, but so-called medical devices to be used topically to treat local infections on tissue surfaces”, the expert stressed. 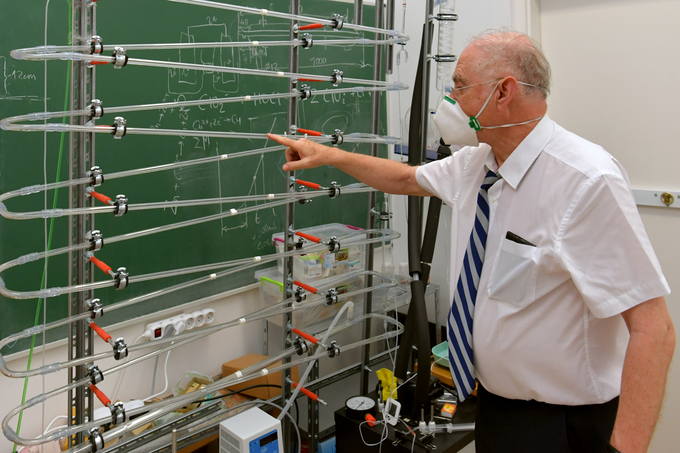 Device developed for the production of chlorine dioxide

“Chlorine dioxide is a chemical substance with unique characteristics, capable of combating all known viruses, while harmless to the human body when used topically. Since gargling with a high purity aqueous chlorine dioxide solution is proven to be useful against viral throat infections, we hypothesise that the same technique will control the spread of coronavirus infections in the pharynx, which cause COVID-19. This hypothesis is currently being tested. We hope that this method can be used as the first line of defence against any unexpected virus causing upper respiratory illnesses until effective virus-specific countermeasures (such vaccines or antiviral drugs) can be developed”, Zoltán Noszticzius explained.