SMOG-1, the 4th hungarian satellite of BME is ready for launch

The launch of a Soyuz-2 launch vehicle with a Fregat final stage from Baikonur (Kazakhstan) is scheduled for the 20th of March, 6:07 am UTC, which will carry SMOG-1, the new hungarian small satellite to space.

The secondary payload, the Italian UNISAT-7 will deploy the 4th hungarian satellite into orbit. It was developed by BME lecturers and students, with its twin predecessor SMOG-P, the first functioning 1-PocketQube (5x5x5 cm) size satellite. The primary mission of the satellite is to measure electromagnetic pollution generated by human activity around planet Earth. The launch of the Russian rocket, which will deliver 38 spacecraft from 18 countries, will be streamed live at http://gklaunch.ru/en.

The 1-PocketQube (5x5x5cm) size SMOG-1 was entirely designed, developed and realized by a team of students under the supervivion of university lecturers of the Budapest University of Technology and Economics (BME). The whole project was part of the academic programme and was funded by several sponsors.  The development was  integrated at the Department of Broadband Infocommunications and Electromagnetic Theory of the Faculty of Electrical Engineering and Informatics, in cooperation with the Faculty of Mechanical Engineering and external experts as well. Launch costs were covered by the Faculty of Electrical Engineering and Informatics and the Ministry of Foreign Affairs and Trade. 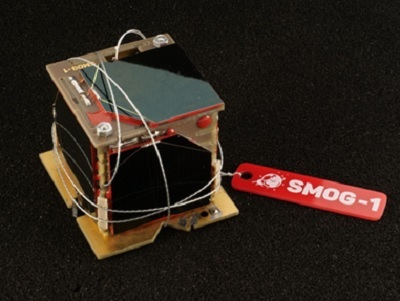 The primary mission of the satellite is the measurement of electromagnetic pollution generated by human activity in space around the Earth. This radiation is called elec- trosmog, from which the name of the satellite is originated. As a secondary mission, a total ionising dose measurement system is on board, which measures and studies the effect of solar wind (particles coming from the Sun) on electronics. SMOG-1 has an additional, tertiary mission (compared to SMOG-P), a special magnetically lossy material which was placed underneath the solar panels and serves as a brake. It is expected to shorten the 18-25 year lifespan of the orbit, therefore minimizing the amount of time which is spent as space trash, after completing the active mission.

The development of the 1PQ size SMOG satellites started in 2014 at the BME. Two flight models were created and one of them got an earlier launch opportunity on the 6th of December, 2019. This unit was named SMOG-P, P standing for precursor, and it served as a preliminary test of the current mission. It successfully accomplished its mission on the 28th of September, 2020.

SMOG-1 was transported to Rome on the 6th of September, 2020, with the assistance of the Embasy of Hungary in Italy, where it was integrated in one of the small satellite deployers of Unisat-7, a spacecraft with a total mass of 32 kg. Including SMOG-1, 38 satellites of 18 countries are now waiting for the launch in Baikonur, to be put into an orbit of 498km altitude and to start their space missions.

As the payload delivery and the orbital deployment of these satellites are part of a multiple stage process, according to estimations, we expect to be able to provide information about the first signals of SMOG-1 early next week.

Accommodated and mentored by the Faculty of Electrical Engineering and Informatics (VIK), MSc Program in Space Engineering starts in 2022, which will prepare future space scientists to be ready for the challenges and technologies of the new industry.