The Technical University presented its autonomous vehicles together with the industrial partners at the largest event on intelligent transport systems.

“We have set up an intelligent installation at the World Congress. We set up real-time virtual connection arching over borders and continents with our self-driving vehicle, and the visitors were also taken on a test drive,” Zsolt Szalay, Associate Professor of the Department of Vehicle Technology of the BME Faculty of Transportation Engineering and Vehicle Engineering and also the head of the National Laboratory of Autonomous Systems seated at BME summarized his experiences briefly of the World Congress on Intelligent Transport Systems (ITS World Congress). 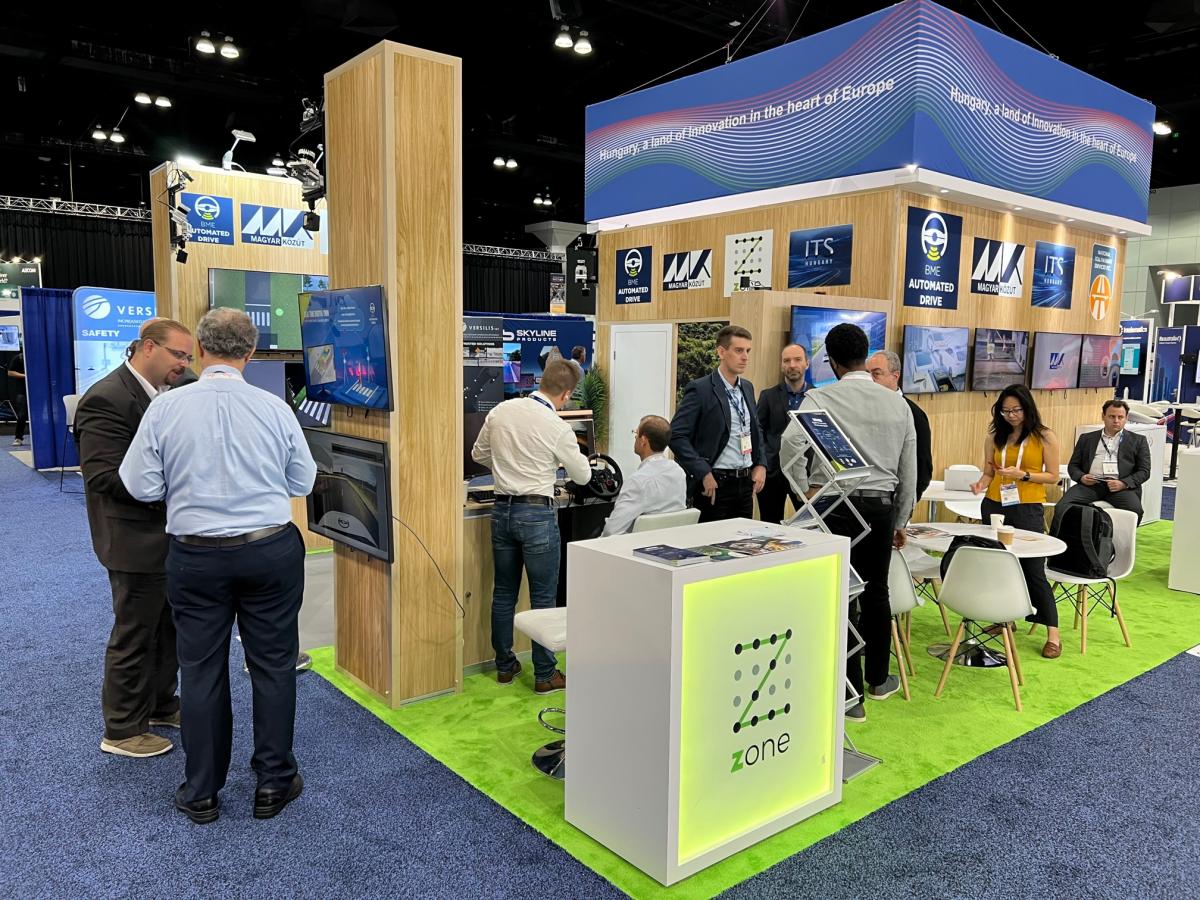 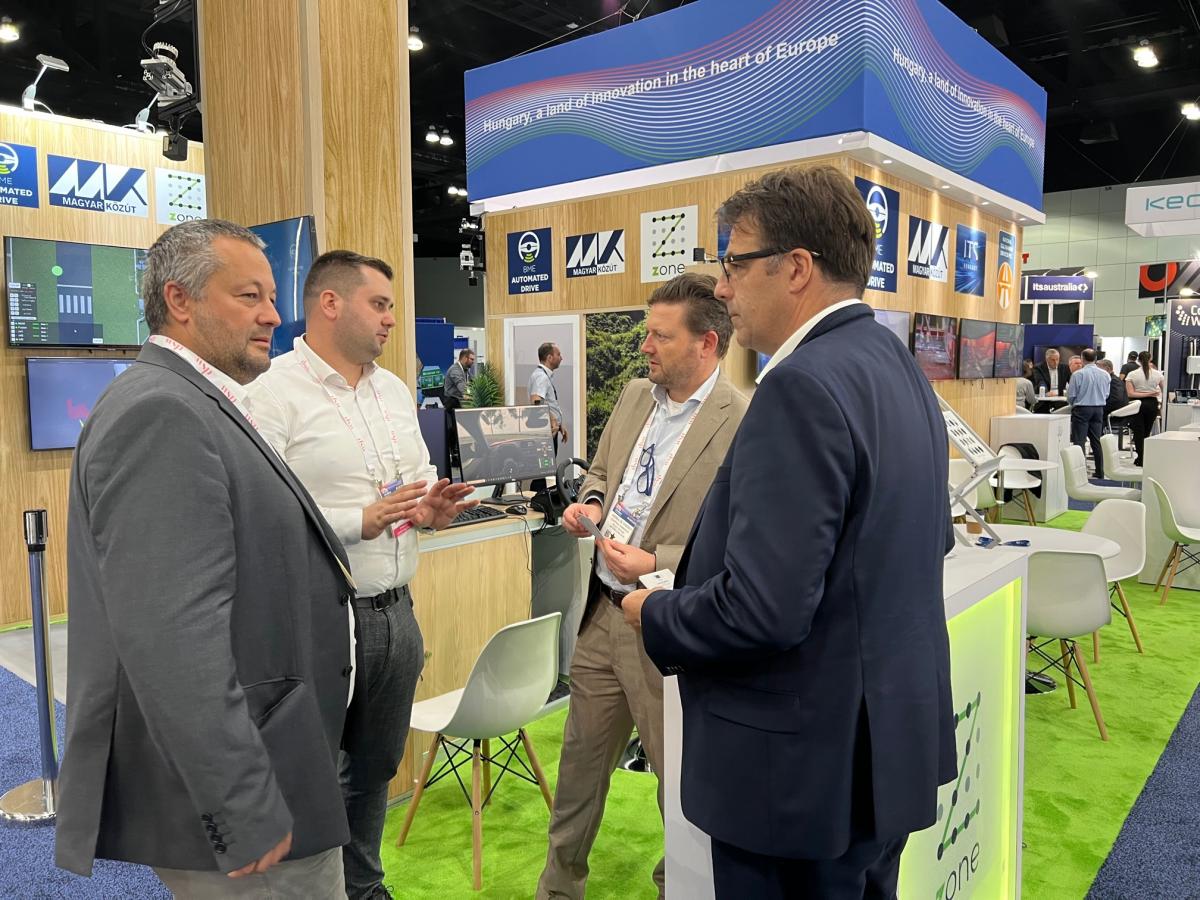 The Hungarian delegation, including Magyar Közút Nonprofit Zrt as the industrial partner, ZalaZONE Proving Ground as a research and testing site, while Budapest University of Technology and Economics (BME) as the developer of the exhibited autonomous vehicle development were present at the large-scale overseas event. The Hungarian cooperation demonstrated the latest achievements in the field of self-driving vehicle development to the audience: a system developed by University of Technology researchers that allowed visitors to control a real car on the test track in Zalaegerszeg from the Los Angeles venue.

“We had two attractions, to be quite precise. We set up a small driver's cockpit with a steering wheel and pedals, where the monitor facing the driver showed the real image the driver sees while driving, and a digital copy of the same image, i.e. a digital twin next to it. Our cockpit was connected to the converted Range Rover, the subject of the University’s development efforts, which was physically located at Zalaegerszeg. The cockpit worked essentially as the ‘extended’ pedals and steering of the vehicle in Zala; any manoeuvre in the cockpit was done by the self-driving car in Zala from a distance of over ten thousand kilometres. Several obstacles were placed on the ZalaZONE test track, including a mannequin symbolizing a pedestrian. Thanks to the pedestrian detection, part of the moving vehicle, the braking command issued by the cloud-based system running in Los Angeles prevented the ‘accidents’ in Zalaegerszeg that would have been caused by the human driver sitting in the cockpit in Los Angeles. At the same time the exact location and position of the detected pedestrian appeared as a green cylinder on the digital twin,” Zsolt Szalay explained one of the Technical University’s attractions in the Hungarian stand. He added that the system operated in near real time, fully satisfactory to human perception, with a delay of only one to two tenths of a second between the US and Hungary, was a technical achievement unparalleled in its kind. The only difficulty lay the 9-hour time difference: the aforementioned demonstration was only on in the morning (US West Coast time), while the time difference meant that another attraction was on in the afternoon (night time in Hungary, during ZalaZONE's off-hours). 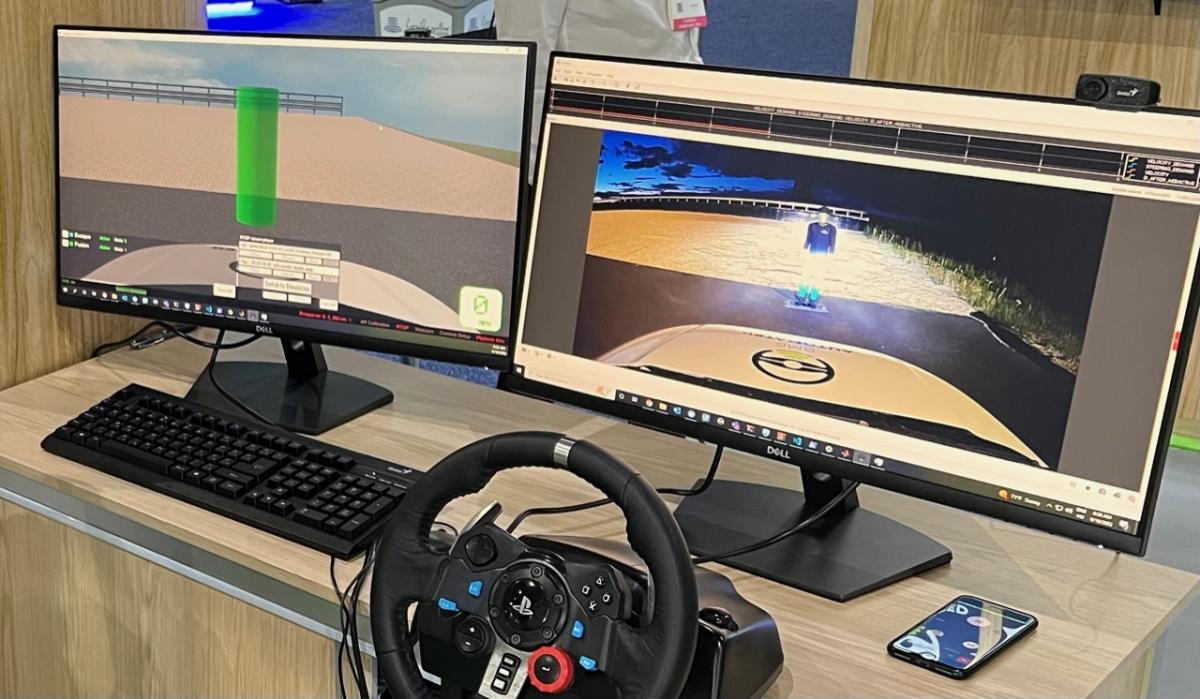 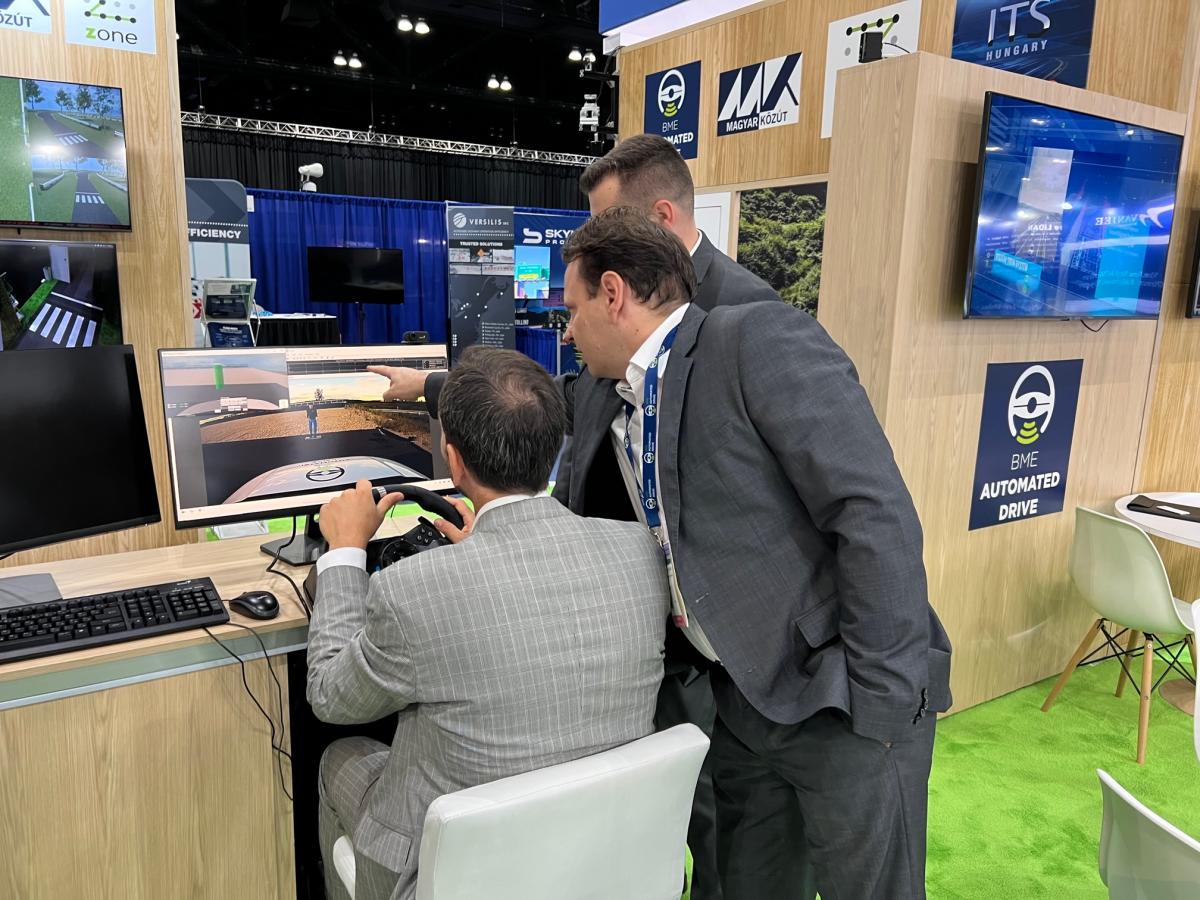 In the mid-afternoon West Coast time, the Hungarian experts presented an improved version of last year's ITS World Congress demonstration in Hamburg. A model of a road equipped with sensors and enhanced with a pedestrian crossing was set up at the stand. The visitors walking at the stand appeared in real time on the digital twin model presenting the site. A virtual self-driving car would occasionally pass by on this ‘road’, detecting pedestrians in the real world and would automatically stop and wait for all pedestrians to leave the roadway. Visitors were given a chance to test-drive this virtual vehicle as well, as they could steer this virtual car from the cockpit in LA.

“Both attractions were immensely successful. Visitors arrived continuously from other research institutes, the industry, and other delegations were also interested in our development,” Zsolt Szalay shared his experiences. In response to our question he explained that participation at events similar to this one offers a number of benefits and new opportunities for the Hungarian vehicle industry researchers. “We were present at the world's most important trade event focusing on intelligent transport now for the second time, now with a very successful development that attracted wide attention. We made a number of new contacts, which could lead to new synergies and collaborations in the future. We were contacted by foreign higher education institutions and companies on the user side, who deliver ‘smart’ systems to metropoles. We also talked to industrial partners, who offered their own products, primarily sensors for the continued development of our system.”

It was a special pleasure and a joint success, that Tamás Tomaschek, a doctoral student of the Department of Automotive Technology of the BME KJK, also gave a presentation at the conference of this prestigious event, as one of the cooperative scholarship holders of the Magyar Közút Zrt.

“When we attended the Hamburg event last year we wanted to see the directions in the development of autonomous vehicles with the latest trends and applications preferred by the industry and the users, and we wanted to find out how the R+D projects of BME and ZalaZONE may fit into these. Both world events confirmed that the projects launched and implemented by BME are headed in the right direction and we are among the world leaders. Not only do our ideas have a place and a right to exist in this sphere, but we can also become major trendsetters,” the BME expert explained the university’s results. As for future ideas, he said that there are plans to set up a university spinoff, in which BME would also use the results already achieved as a business venture. 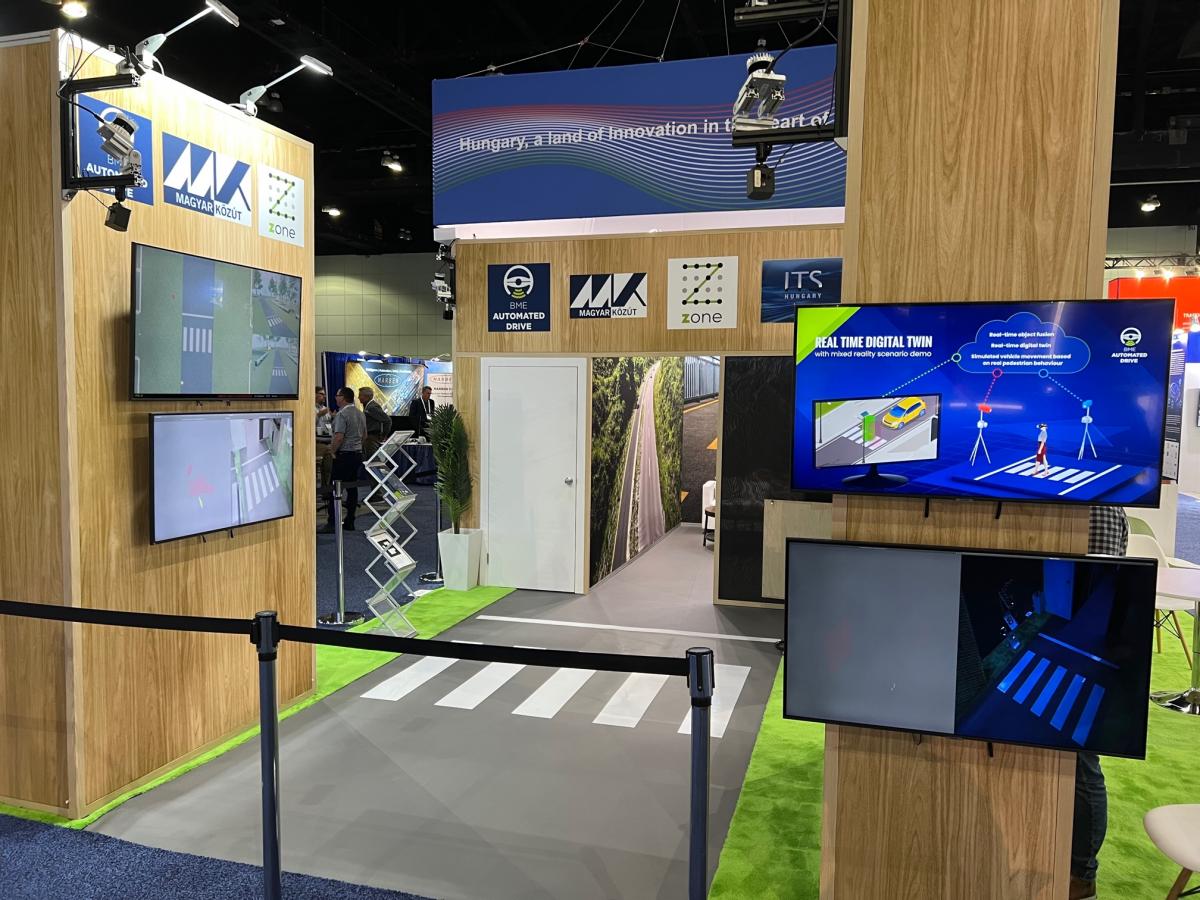 The researchers are also planning a range of experiments with the promise of exciting novelties. An improved version of the cloud-based system, which was also presented in Los Angeles, is currently being tested on the suburban sections of the M1-M7 motorways, with the aim of observing and collecting data to study the grouping and swarm-like behaviour of traffic, human drivers’ reactions in a given traffic situation and emerging trends. “This experiment will help us understand the group behaviour of human drivers. We would like to develop scenarios where autonomous vehicles are included into a traffic system of human-driven ones. We wish to find out what developments are necessary to ensure the safety when self-driving cars are added to such a model,” Zsolt Szalay revealed, and added that several scientific publications can also be expected in these subjects in the future. Researchers working on these projects aim to present themselves to a wider national and international academic audience. He added that the new, ‘smart’ section of road M76 will soon be inaugurated, where the smart system will be based on the BME’s development and cloud-based control.

Zsolt Szalay was happy to add that the 4th ZalaZONE Innovation Day was held directly after the forum in Los Angeles with over 300 interested participants from the industry and academia.