The latest telecommunications technologies were used for the first time in Hungary when autonomous vehicles were tested upon the completion of the first phase of the ZalaZONE automotive proving ground. 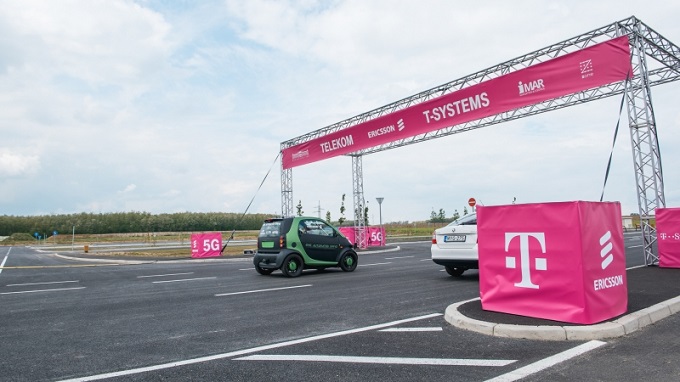 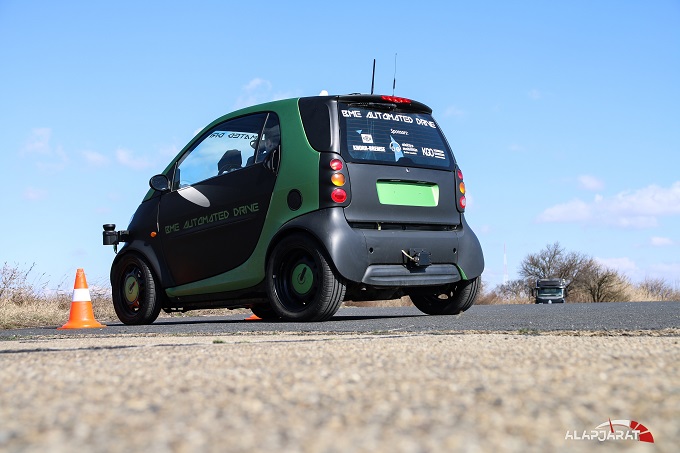 The joint demonstration of BME and ZalaZONE featured a unique “Scenario in the loop (SciL)” solution, applied to BME's specially fitted SMART vehicle. SciL combines the virtual and the real worlds and tests the functionality of autonomous vehicles in a complex traffic situation, which is very similar to the real environment, but with testing carried out in safe conditions. During the demo, the car, which has been specially designed as part of the SciL testing system, reacted to objects placed in the simulation environment in virtual space, as well as in real space and detected autonomously with its sensors by using the 5G network.

The ZalaZONE Tracker system, developed by BME, uses a central interface and allows the real-time monitoring of vehicles on the test track. It monitors the track sensors and displays their values, while also being capable of sending messages to the drivers using the track. It is also able to show the key statistical values of track use and the sensors in the form of graphs. 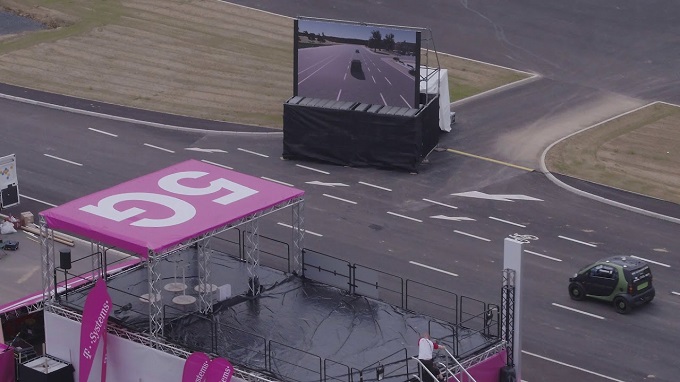 The 400-strong audience was treated to a 5-6-minute live demo which, among others, featured the so-called “Valet Parking” function. Prompted by a phone call, the vehicle automatically left its parking position and drove to the caller. During the demo a virtual and a controlled “dummy” pedestrian was placed in its path, to which the car was able to respond.

The other function is the “Traffic Jam Pilot”. Here the vehicle used its camera sensors to detect the lanes and adjusted its speed to follow the car in front of it. During the demo it was following a virtual and then a real car. With both functions, the SMART's on-board cameras projected the view from the cockpit for the audience (also showing that the safety driver did not intervene) and the virtual world of the simulation was displayed on a large LED wall. The imagery was made even more spectacular by using drone footages.

After this, iMAR Solution's test vehicles gave a demonstration of real-time traffic situations according to the recently presented PEGASUS workflow: a so-called Traffic Simulation Vehicle executed an overtaking manoeuvre in fully autonomous mode and passed by ZalaZONE's smart city area while also using the 5G network for communication. 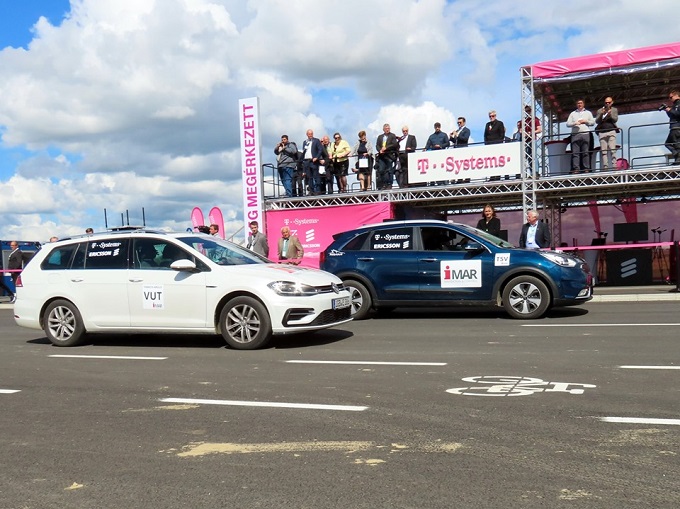 Magyar Telekom launched Hungary's first standard 5G test station in downtown Zalaegerszeg in January 2019. In addition to the base station in the city centre, the company also upgraded its existing transmission tower at the ZalaZONE test track to 5G in order to make the test track suitable for the development and testing of network-connected self-driving vehicles, as well as traditional ones.

The 5G mobile technology was installed by Ericsson Hungary, using Telekom's transmission tower, broadband optical connection and power supply on site. The test environment was constructed by engineers from Ericsson, Telekom and T-Systems Hungary working together. The local 5G network presently operates within the 3.5 GHz frequency range, the temporary use of which was authorised by the National Media and Infocommunications Authority (NMHH). The under 10 ms latency of the 5G network allows driverless cars to communicate safely with one-another and with an optional control centre via the central infrastructure in order to reliably react to traffic situations. 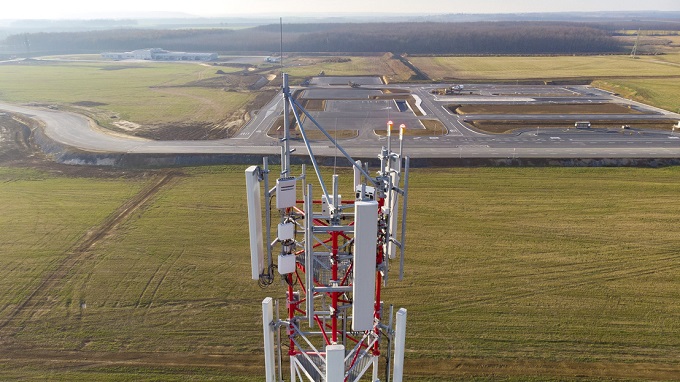 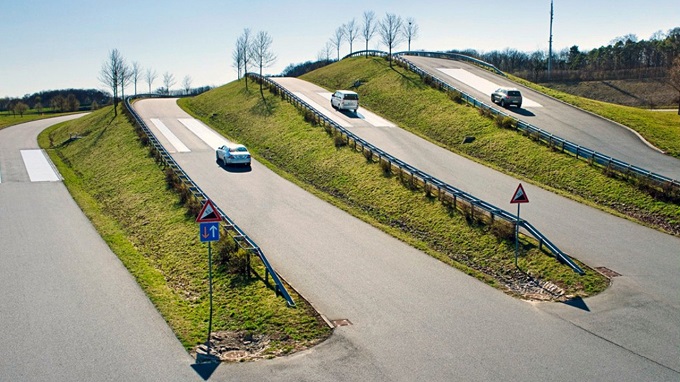 “We are proud to demonstrate, together with our partners, the role of the 5G network in automotive development projects, especially in light of the proliferation of autonomous driving technologies. The ZalaZONE test track is the only one of its kind in Europe, offering exceptional testing facilities for many automotive manufacturers and using the 5G network infrastructure, installed here by Magyar Telekom”, explained the company's CEO Tibor Rékasi after the demonstration.

“Developments in autonomous vehicles, the 5G network, infrastructure and network communication, which so far have been running separately, can be combined from now on by using the proving ground, thus providing a significant competitive edge for local stakeholders, not just on a regional, but also European level. In our fast-changing global environment the government, the market and all those involved in R+D+I have to abandon their traditional roles and create new forms of cooperation. This is what also makes ZalaZONE exemplary, stressed Zoltán Kaszás, CEO of T-Systems Hungary and Chairman of the Connected and Automated Mobility Cluster of Zala.

“Ericsson Hungary is very proud to have contributed to the first 5G technology-based self-driving car demonstration in Hungary with the company's leading technology. The test track experience shows how various industries can join together to push the boundaries of what can be achieved using 5G technology, stressed Gábor Éry, Country Manager of Ericsson Hungary.

“We very much appreciate the invitation to demonstrate at the ZalaZONE test track, together with our academic research and telecommunications partners, a leading technological solution, which is already fully automated. We are looking forward to a continued close cooperation between Hungary and Germany to strengthen the automotive industry in Europe, so that we can present the most competitive and reliable solutions, complying with high level European standards”, said Edgar v. Hinüber, CEO of IMAR Navigation in Germany.

Simultaneously with the opening ceremony T-Systems Hungary delivered its Sparkon solution-based smart parking system, installed on the track. At present, the controllers can get information from the sensor-monitored parking area using an application. The continued joint development aims to ensure that driverless cars can interpret data from the parking system without controller intervention, in order to remotely optimise the time needed for parking, from a greater distance.

First ever demo of driverless cars in Hungary, communicating via the 5G network at the ZalaZONE test track

The next-generation 5G mobile technology provides close to ten times higher data transmission speed, significantly shorter response times and a much better customer experience. Thanks to its capacity, which is many times over the current capabilities, tens of millions of devices can be connected to the network at the same time. This completely novel network concept combines the benefits of fixed and mobile communication. The opportunities it provides are not only related to its speed, but also to the embedded network intelligence and its ability to work together with other technologies. As a result, 5G will bring a number of new solutions in the fields of industry, energetics, agriculture, transport, healthcare, education and virtually all aspects of life. The new technology is expected to be available throughout Europe within a few years.