Interview with Ferenc Simon, research leader, whose research team have recently published an article in the Scientific Reports Journal.

„In informatics development programmes are aiming at producing smaller size devices with higher levels of performance but our key priority is not to reduce sizes but to create new architectures, specifications and models. This process can be supported by carbon nanotubes, the smallest, nano-size „wires” and by spintronics as a possible basis for new architectures. As most researchers do, I have chosen my research topics according to my own interests. But these separate areas of science are connected to each other and even for an outside observer they may make a coherent whole,” summarized Ferenc Simon, Professor of the Department of Physics of the Faculty of Natural Sciences, for bme.hu. 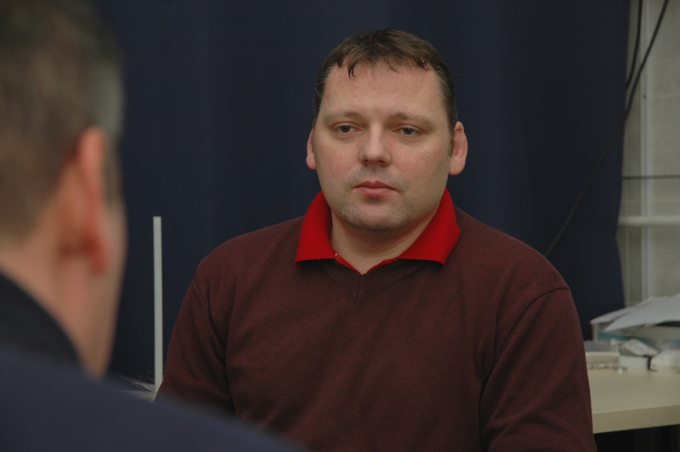 Ferenc Simon graduated at the Budapest University of Technology and Economics as a physicist‐engineer in 1997, did his PhD in Physics in 2002 and in 2009 he became a Doctor of Sciences of the Hungarian Academy of Sciences. He is one of the few in the country who obtained habilitation at two universities: the University of Vienna in 2007 and the Budapest University of Technology and Economics in 2010; therefore he became a professor at the age of 37. „Scientific achievements need hard work, persistence, talent and good fortune (in this order),” he advises young scientists on his webpage. As a student he spent a year at the University of Manchester in 1995, where he was dealing with High Energy Physics, a relatively new area after Solid State Physics studies at BME. „I had very little confidence before leaving Hungary, I did not know how to evaluate my own knowledge according to the new expectations but eventually it proved very competitive. The excellent library in Manchester and the motivating environment made it possible that later in Hungary I won the Ortvay competition for students in Physics.” The scientists also spent 4 months in France, one year in Switzerland and four more years at the University of Vienna, in Austria. „In France I was working on a new field of research again: nuclear magnetic resonance, but it was a manageable challenge. Our Soviet-Prussian type education system gives a very sound basis, which we can always „capitalize on” abroad despite of the shortage of high-tech equipment and direct contacts with the industry,” said the scientist.

Ferenc Simon has received three EU grants so far, the first one was the Marie‐Curie Intraeuropean Fellowship to finance his research in Vienna and later the Marie‐Curie Reintegration Grant to support his return to Hungary. The long years of hard work brought a very outstanding result in 2010 when the European Research Council provided a 1.23 million Euro funding to his research team. The team’s members are Balázs Dóra, associate professor of the Department of Physics of the Faculty of Natural Sciences, Annamária Kiss, senior research fellow of the Wigner institute of the Hungarian Academy of Sciences and 9-10 university students. Most of the funding was used to purchase equipment for the research activities. 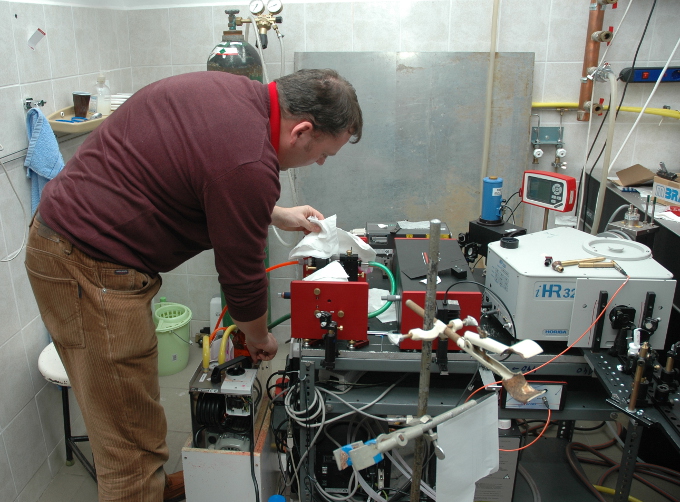 Ferenc Simon’s doctoral research was related to the subject of spintronics and at the University of Vienna he was working with carbon nanotubes. Carbon nanotubes attract considerable attention due to their unique structural properties, which render them ideal for high resolution materials. The young researcher had to select his research area in 2005 and he decided to deal with the two topics parallelly. “In spintronics research we examine properties of 3D bulk materials’ and spin-relaxation phenomenon by creating relevant model systems. In 2010 it became evident that the knowledge about characteristics of bulk materials can be applied for nanostructured materials, like carbon nanotubes and graphene. It was the point where the two areas unexpectedly joined opening further exciting prospects,” explained the researcher.

3-4 members of the research team are working on one area and other 3-4 are dealing with the other but there is a third topic to examine: optically detected magnetic resonance. The main supporter of this activity is the laser device we purchased using the ERC funding. Researchers’ salaries fall significantly short of the salary levels of West European countries; on the other hand TÁMOP projects and other EU funding schemes have helped a lot to close the gap in available infrastructure. The team is soon moving to Building L, where a new laboratory of 100 m² with state-of-the-art equipment will be opened. 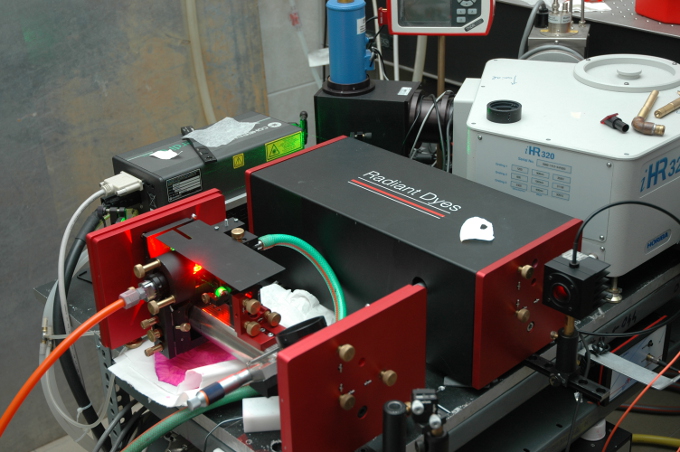 “It may sound emotional but I feel a strong loyalty toward the University of Economics – as if I had unsettled obligations,” said Ferenc Simon. “Apart from the time spent abroad the University has been my only place of work; I graduated and got my doctor’s degree here. To be one of the 7-8 professors from the 40 senior lecturers of the Institute of Physics is a huge recognition and I was appointed at a relatively young age. For me it is absolutely obvious that I would stay here.”

After ERC funding has been closed the Lendület (Momentum) Programme of the Hungarian Academy of Sciences may provide further resources to continue research. In his long-term planning Ferenc Simon is also considering using the sabbatical programme of the Faculty of Natural Sciences for 1-2 years and spending this time in Germany. “Experimental researchers find it hard to move abroad because they have to take most of their equipment and leave a good team behind,” he added.

Ferenc Simon takes an active role in education as well, in the past year he has been the consultant of five degree theses. He finds it important that best performing students should get admission to the Physics programme because the knowledge levels of the applicants are getting lower year by year. “I am going back to my Grammar School, Fazekas, to take part in a career orientation day,” he said. “Students from Fazekas have visited our labs already with their teachers. We are trying “to be attractive” for students, we organize information days at the Faculty, not only publish information on our website. In the Institute of Physics we are working hard to have more and more outstanding students.”

The researcher is convinced that a degree from the Faculty of Natural Sciences offers excellent knowledge basis. On all levels of education there are exits to alternative career paths; students can find employment in the industry with BSc or even with PhD degrees. “Not all scientists with PhD degrees should be university professors; there are not even enough positions for that. Our Faculty has had two PhD students – I was one of their consultants – who got employed in business companies and started their career in high-ranking positions.” The other side of the coin is that researchers have opportunities to live and work abroad, which is a very attractive possibility and has also become inevitable to obtain competitive and advanced knowledge. Using the University’s network several students have taken part in summer practices or exchange programmes and worked in research labs in Zürich, Vienna, Lausanne and other universities. 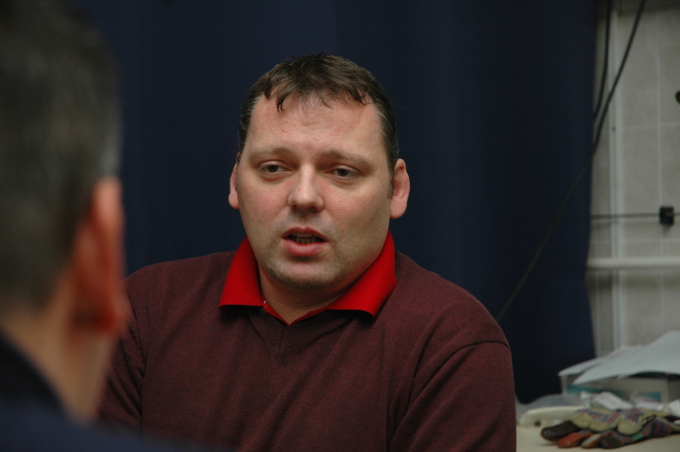 “For me Physics means the joy of problem solving, this is when I use my mind and get inspired,” said Ferenc Simon. I am not discontent, I love the work I do but I have had to take all the effort to reach the results. I was not a spoilt child, my father is a physical worker and my mother is an accountant, I did not come from an upper-class milieu, where for example speaking foreign languages would have been evident. This is why I keep encouraging my students to work hard and they will surely reach their goals.”