From pebbles to sand grains – evolution in inanimate nature

“This article summarises the studies we have been conducting for many years and have presented in multiple publications while also going beyond that,” stressed in response to bme.hu’s question Gábor Domokos, head of the MTA-BME Morphodynamics Research Group, professor of the Department of Mechanics, Materials and Structures at the Faculty of Architecture (ÉPK) who presented the studies carried out collectively with his Hungarian, Italian and American peers in the prestigious Science Advances journal under the title “Universal characteristics of particle shape evolution by bed-load chipping”. 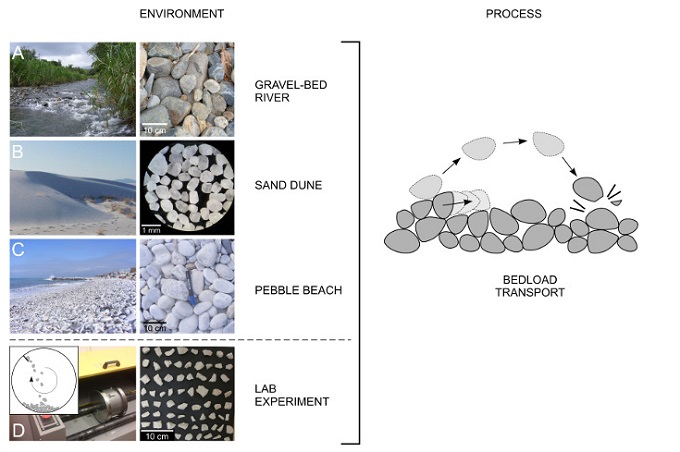 Gábor Domokos added that “this study is unique in the sense that the shape evolution of bed-load particles is presented by a universal model that is based on mathematics while also being verified by a very broad range of experimental datasets. The same model is also applicable on a larger scale as this has been used to describe the shape of asteroids.”

The present study explores the general rules of the attrition of bed-load transport (pebbles and sand grains) driven by river currents, the wind and sea waves and colliding with each other as well as the Earth’s surface. (Editor note: Some of the previous phases of the project have already been reported on by bme.hu.)

The newly published study verifies the mathematical results relating to the time evolution of the isoperimetric ratio, a measure of the roundedness of particles and the most frequently studied shape characteristic, through computer simulations, laboratory experiments and field measurements. The article discusses that these universal characteristics arise because of three critical constraints that apply to a wide range of geophysical shape evolution processes. The first condition is that the initial particles are mildly elongated polyhedrons (fragments). The second condition is that the particles collide with similarly-sized particles and the third condition is that the collision energy is small enough to allow chipping to dominate over fragmentation while being large enough to allow collision between the particles. “Very low levels of collision energy almost entirely prevent attrition while collision at high energy levels often lead to the fragmentation of the pebbles,” the researcher explained adding that the model described in their publication applies to a broad medium energy range. “If the pebbles do not crack but are transported a little distance by wind or water, it is called collision chipping occurring at a medium energy range. Our theory explains the laws of this in the broadest possible range of geophysical environments including even those on another planet,” the researcher stated in reference to the potential practical results of their investigations.

Gábor Domokos said that “the discovery of the Gomboc directed our attention to the strong link between one geometric shape and one amount typical for that shape, which in our case was the number of the points of balance.” This discovery helped find the mathematical model of shape evolution.

To prove this theory, the researchers needed to take extremely large quantities of high quality measurements. One of the field trips included Tímea Novák-Szabó, assistant professor at the Department of Mechanics, Materials and Structure and co-author of the article who took part in a several-week-long international expedition examining the sediments of a river in Puerto Rico. American geologists had been working there for years: they had excellent local knowledge but they lacked the appropriate mathematical model to interpret some of data they had collected. “As an illustration of all the difficulties they had to face on their way, on one occasion an iguana fell on Tímea’s neck in the rainforest,” Gábor Domokos shared the details of the extraordinary challenges prior to the writing of the article.

Concerning the Italian co-authors of the study, BME’s researcher said that they had launched a very special research project: they had radio-tagged 300 pebbles on a beach near Pisa, tracked their motion for one year and examined their attrition-shaped new form.   “They work with a very high quality measurement technology but they had not done any mathematical modelling before so we combined our knowledge with theirs,” Gábor Domokos explained adding that the enormous storms hitting the area in that winter allowed only a relatively small amount of the pebbles to be retrieved and examined. This observation sequence alone took one and a half years. He stressed that “especially Duccio Bertoni, Alessandro Pozzebon and Edoardo Grottoli had worked extremely arduously – including physically – as the search for, and the collection of, the pebbles from the sea was very difficult. However, the examination of the pebbles retrieved required the knowledge of their Hungarian peers so Tímea once again had to travel to the site to help them.

The Hungarian researcher found that they had implemented the most effective measurement procedures available in their field of expertise but their collaboration did not end: they continue to work together with the Italian scientists and are planning new projects.

The most advanced knowledge in geophysics necessary for the article was provided by Douglas Jerolmack, the internationally renowned head of the geophysics laboratory at the University of Pennsylvania. The American researcher had worked together with his Hungarian colleagues on a number of research projects before focusing mainly on the shape evolution of pebbles from Mars. (Editor note: the project have already been reported on by bme.hu.)

“András Árpád Sipos, associate professor of the Department of Mechanics, Materials and Structures at ÉPK and co-author of the article has in recent years developed the foundations of a special computer modelling method,” stressed Gábor Domokos adding that “to my knowledge, no other research group has access to such a modelling system at present: we are able to carry out the attrition of pebbles on the screen in almost real time and potentially simulate fragmentation and then compare the results with experimental data.” 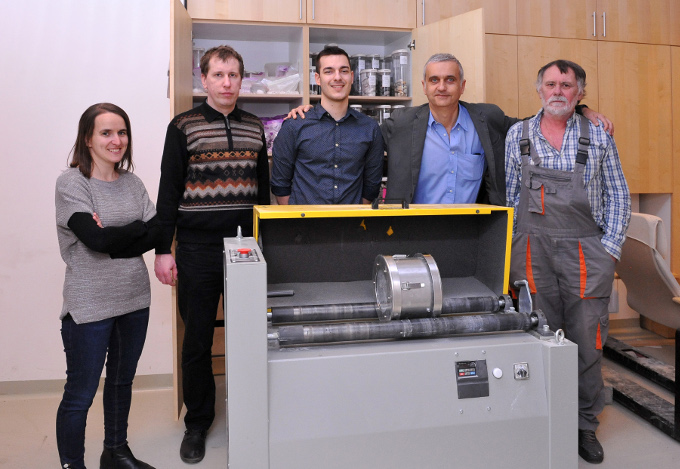 The researcher emphasised that the experimental department of MTA-BME Morphodynamics Research Group operating within the Czakó Adolf laboratory of ÉPK’s Department of Mechanics, Materials and Structures has access to globally competitive equipment and practical knowledge. The two technicians of the laboratory, Krisztián Halmos and Ottó Sebestyén – although not engaged as authors of the article – have contributed immensely to the project over the last few years. “We wouldn’t have experiments without them,” stressed Gábor Domokos adding that “we had been working very hard with our colleagues from BME and abroad before we could fit the last piece of the puzzle into place. Our theory is now complete and will be applicable to the broadest spectrum of geophysical research. The MTA-BME Morphodynamics Research Group continues to study many exciting problems including examining the form of natural fragments and investigating how the results of statistical physics, convex geometry, the graph theory and the theory of dynamic systems combined with the latest digital measurement technology could be used to help the description of the processes of shape evolution.”