"We will continue the work with my friends at the BME"

"I truly feel honored and I will continue to work jointly with my friends at BME to achieve further excellent scientific results and contribute to the visibility of your university." – emphasized Hansjörg Grützmacher  when he received the recognition. 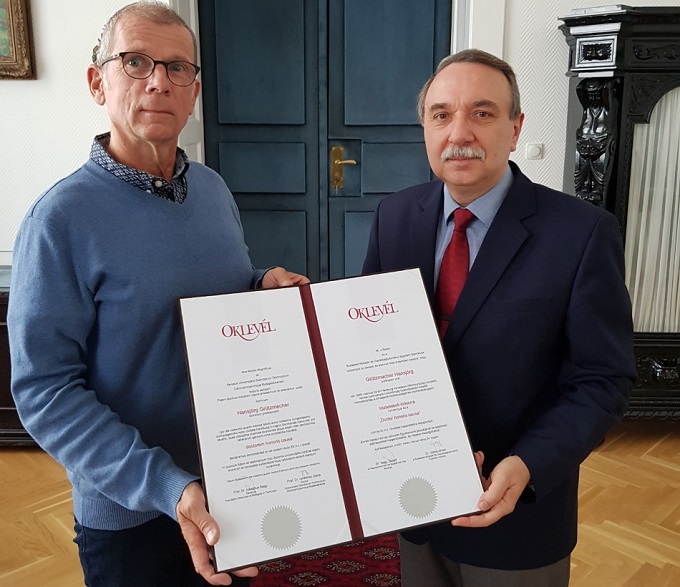 Associate Professor Zoltán Benkő, deputy head of the Department of Inorganic and Analytical Chemistry, has been working with the professor for almost a decade. Zoltán Benkő spent 33 months doing research at ETH, and over the years a total of 21 publications were published about the results of the joint research in the field of inorganic chemistry. The current meeting was also about new plans and the joint work to be continued.

The Senate decided to award Professor Hansjörg Grützmacher based on the proposal by József Nagy, former dean of the BME Faculty of Chemical Technology and Biotechnology  in 2021. The justification for the honorary doctorate title was Professor Grützmacher’s internationally recognized activity in the field of chemical sciences. Professor Grützmacher obtained his PhD at the University of Göttingen, followed by a habilitation at the University of Heidelberg and later he became a professor at the University of Freiburg. Since 2001, he has been a professor at ETH Zurich. He carries out an outstanding work in the field of inorganic chemistry, his main research area is the production and characterization of highly reactive compounds on the one hand, and the catalytic use of transition metals on the other. So far, Mr. Grützmacher has received more than 9000 citations at his publications in leading chemistry journals.

ETH Zurich is one of the most prestigious universities in Europe. Its importance is well-demonstrated by the fact that the institution is ranked high in major international higher education rankings, for example ARWU (21), QS (9) and THE (15).